Ajax prodigy Matthijs de Ligt entered the football record books this week, after captaining his side in the last 16 first-leg knockout stage against Real Madrid.

De Ligt took the armband against the Spanish giants at 19 years and 186 days old, surpassing a record set by Cesc Fabregas to become the youngest ever to captain a side in the knockout round.

Fabregas initially set the new record back in 2009 aged 21 and 70 days, when he was handed the reins at Arsenal and took the armband to face Roma.

De Ligt has now clocked the new record, in what is likely to be his final season as an Ajax player.

The starlet took over as skipper of the club in March 2018 following injury to previous skipper Joel Veltman, and in doing so also became the youngest ever captain in Ajax history.

The Holland international has quickly become one of the most in-demand players in world football, despite his tender years, and will have a host of clubs queuing up to sign him in the summer. 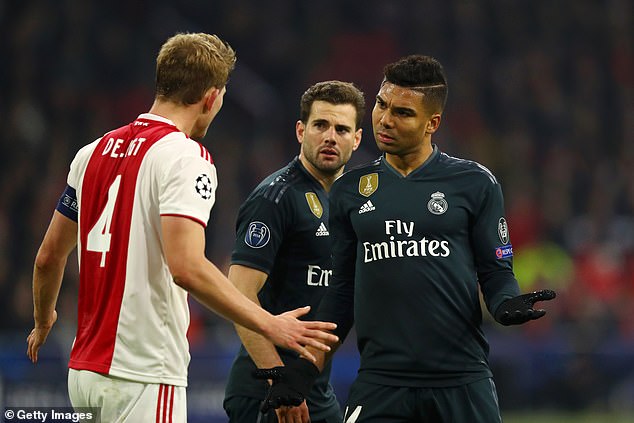 Despite his tender years, De Ligt assumed leadership responsibilities on the biggest stage

Manchester City, Liverpool and Chelsea have all been linked with the 19-year-old, along with Juventus and Barcelona.

Barca have already swooped in Amsterdam to acquire the services of Frenkie de Jong for next season, though are not averse to going back in for De Ligt.

Speaking candidly in a recent interview, Barca president Josep Bartomeu admitted the versatile centre-half is very much on club radar.

‘We have followed De Ligt for a while,’ Bartomeu said. ‘It’s true he’s a player we like, but Barca also have other important players in the squad. 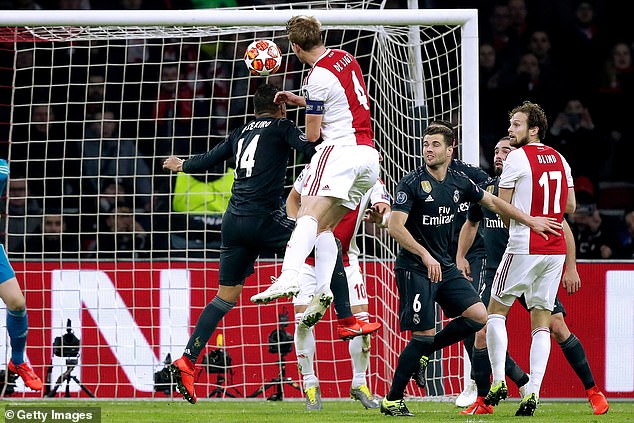 De Ligt could not, however, prevent his side from slipping to a 2-1 defeat in Amsterdam

‘We will look at more things from March or April. We’re delighted to watch him play and admire him, but there’s nothing more at the moment.’

Despite a strong performance, De Ligt’s leadership was not enough to take Ajax to victory against Madrid in the Dutch capital.

Goals from Karim Benzema and Marco Asensio wrapped up a slender victory for the visitors, as Hakim Ziyech’s return strike kept Ajax hopes alive heading into the second leg with the score poised at 2-1.