Al Roker is on a mission to bring comfort and hope to people across the US amid the pandemic by attempting to break a world record for the longest online sandwich-making relay.

The 65-year-old Today host has enlisted more than 60 chefs across the country to help with the food-focused challenge, which will be broadcast throughout the day on Thursday.

Al’s sandwich stunt is the latest installment of his much-loved Rokerthon series, which the father-of-three launched in November 2014, when he broke the record for the longest uninterrupted live TV weather report after broadcasting for a staggering 34 hours.

Ready, set, sandwich! Al Roker will attempt to break the Guinness World Record for the longest online sandwich-making relay on Thursday morning as part of his latest Rokerthon stunt

Since then, Al has also claimed the Guinness World Record title for the fastest time to report a weather forecast from all 50 US states and the District of Columbia.

However, when it came to this latest Rokerthon concept, Al and the Today team had to get creative to overcome additional barriers created by the ongoing coronavirus pandemic.

After settling on a food-themed challenge, Al explained that he wanted to choose a dish that he knew would be loved by all and provide comfort to those who need it most – and what better pick than a sandwich.

‘Everybody likes a sandwich, it’s like, who doesn’t love a good sandwich,’ he told DailyMail.com.

‘When [producers] came to me, they said we want to do something with food, what would you do?

‘So I said, “We obviously can’t go anywhere. Let’s do a food Rokerthon with sandwiches.”‘

Having spent months filming the Today show from home, Al understands just as well as the next person the need for some light-hearted, fun entertainment – as well as new ideas for easy recipes that people can make at home, and he hopes that this Rokerthon will provide viewers with both.

‘People are running out of ideas for things to make!’ Al, whose daughter is a chef, said. ‘I want to give them hope, throw them a lifeline.’

The Today weatherman has signed up more than 60 chefs to help with the challenge, which will see each food pro put together their own delicious sandwich one by one, only passing on the baton after they have completed their dish. 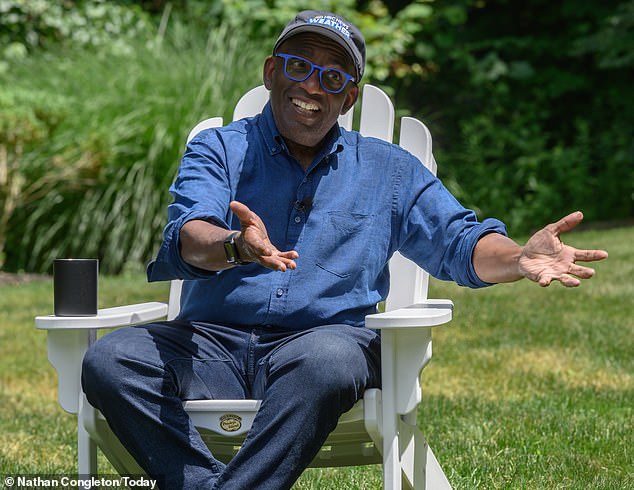 Comfort: The 65-year-old, who has been filming the Today show from home amid the pandemic, says he wants his latest Rokerthon to give people ‘hope’ during these difficult times

Chefs who are taking part in the Rokerthon include Martha Stewart, Lidia Bastianich, Bobby Flay, Priya Krishna, Sandra Lee, Marcus Samuelsson, Molly Yeh, and Andrew Zimmern, with Al explaining that he also has several people waiting in the wings to replace someone in case of an issue with connectivity, or should there be a ‘mayonnaise incident’.

However, there are other things that the chefs will also have to keep in mind – namely their timing.

In order to qualify for the world record title, at least 50 chefs will need to take part in the relay, each building their own original sandwich before passing on the baton to the next food pro in less than a minute.

There are also several stipulations for what constitutes a world record-worthy sandwich – and a bit of cheese stuck between a folded slice of bread just isn’t going to make the cut.

‘To qualify as a sandwich for the for purposes of this title with Guinness World Records, there must be at least two traditional or classic ingredients, not including condiments, placed between two slices of bread,’ a spokesperson for the Today show confirmed.

‘To count towards the total, each person in the relay must compile a sandwich that meets these criteria before the next participant begins.’

As for Al’s sandwich of choice, he says he loves nothing better than a ‘basic’ grilled cheese – although confesses that he will occasionally spice things up by adding some bacon to the mix.

‘My favorite sandwich is very basic,’ he shared. ‘I like a good grilled cheese, white bread. 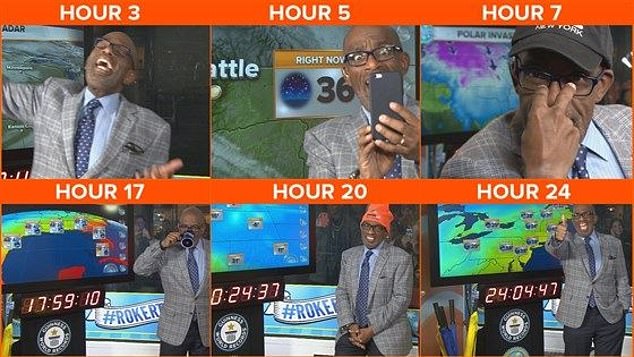 Where it all began: Al’s first Rokerthon in November 2014 saw him set a world record for the longest uninterrupted live TV weather report, during which he broadcast for 34 hours 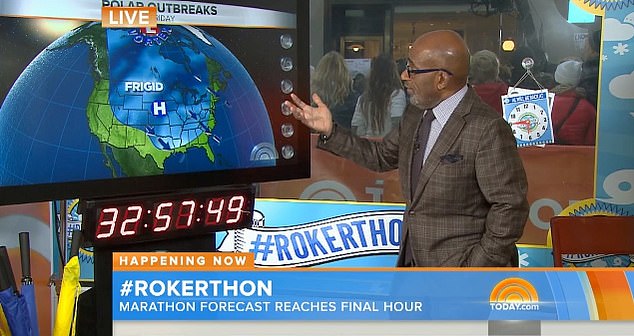 Achievement: The father-of-three also holds the world record for the fastest time to report a weather forecast for all 50 states and the District of Columbia

‘I use American cheese, and if you want, you could put a couple of slices of bacon in there. I won’t judge you for that!’

The broadcasting legend also weighed in on the infamous butter versus mayonnaise debate, confessing that he was recently converted to mayo, and is now fully convinced that the condiment makes for a much crispier end result.

However, Al confesses that he won’t be putting his sandwich-making skills to the test during the Rokerthon and will instead serve as the ‘sandwich ringmaster’ during the proceedings, emceeing the action as the expert chefs whip up their delicious dishes.

Al hopes that the sandwiches created during his Rokerthon not only provide people at home with ideas for new things to make, but also conjure comforting memories of family picnics and barbecues.

‘Who doesn’t remember mom and dad schlepping you to the pool, a lake or a beach with a basket full of sandwiches?’ he said. ‘No matter who you are or where you grow up.’

Al added: ‘I think everybody finds… especially now in the summer, if there is any saving grace when we’re all stuck at home, you can still fire up the barbecue, you can still socially distance at the picnic table.’

The Today star is not only aiming to set a new world record with this latest Rokerthon, but also spread awareness about the many people across the US living in hunger or struggling with food insecurity.

Throughout the challenge, Al and his band of chefs will speak to viewers about Feeding America and World Central kitchen, while encouraging them to make donations to both worthy causes.

Al’s Rokerthon is set to kick off at 8:30AM ET, and will be broadcast through the day on Today All Day, the morning show’s new 24/7 streaming channel.