Bayern Munich’s David Alaba and Arturo Vidal have been ruled out of their Champions League quarter-final second leg against Sevilla on Wednesday as the Germans eye a semi-final spot after their 2-1 first leg victory.

Versatile fullback Alaba has missed their last two matches with back problems while midfielder Vidal picked up a knee injury in the first leg.

‘David trained with the team but he has not been able to take part in the past few days so he couldn’t really push hard yet. So I think it would be better for him to get a few extra sessions under his belt and play on Saturday,’ Bayern coach Jupp Heynckes told reporters on Tuesday.

‘I think Arturo Vidal will return to training on Thursday.’

Bayern, in their seventh straight Champions League quarter-final, enjoyed a low-key title celebration during the weekend after securing the Bundesliga title with five games to spare as they wanted to stay focused on securing the treble.

‘I do not think there will be any drop of tension from us because it is now that we have to be careful,’ winger Arjen Robben said.

‘There is already a lot of talk about the semi-final but let us first play a great game tomorrow and advance. Sevilla have shown what they can do away from home.

‘If we want to win the Champions League then we will have to improve.’ 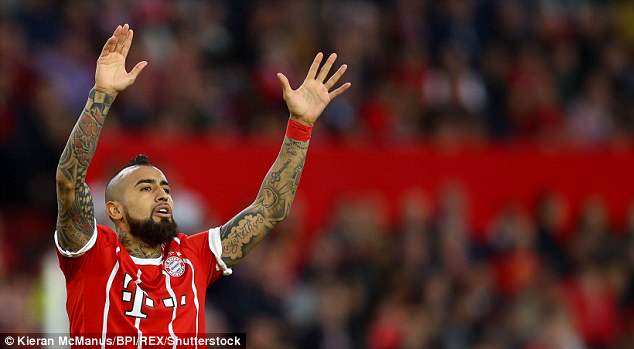 Bayern last won the title in 2013 but have been eliminated by Spanish opponents in the last four seasons. Sevilla beat Manchester United at Old Trafford 2-1 in the previous round’s return leg to advance.

‘Of course, when you lose 2-1 at home you know you need to take risks to qualify. You need to be more attacking, which is what Sevilla will be,’ Heynckes said.

‘They are a team that can press really well. And when you look at (Ever) Banega then it will be a completely different affair.’

The 29-year-old Sevilla midfielder is back for from suspension after having missed the first leg.

‘But we are well prepared, we have a good atmosphere and my players are hungry to advance,’ Heynckes said.