An Alabama baby boy has been named the most premature infant to ever survive after celebrating his first birthday earlier this year.

Curtis Zy-Keith Means was born on July 5, 2020, only 21 weeks and one day into his mother’s pregnancy.

He weighed 14.8 ounces – just under one pound – and required intensive medical treatment to survive and safely go home with his parents.

Curtis pulled through and was recently honored by the Guinness Book of World Records as the most premature baby to ever survive.

Curtis Means (pictured) is the most premature baby to every survive, being born at only 21 weeks and one day into his mothers pregnancy term 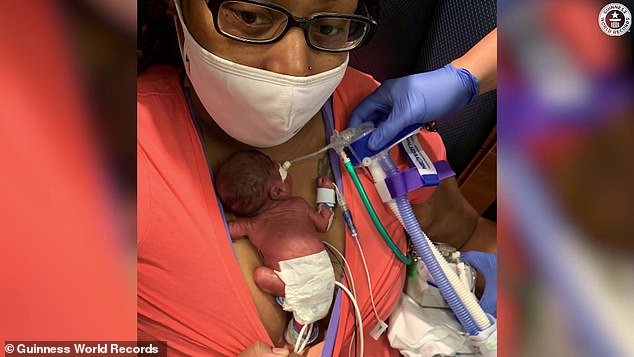 Means (pictured on his mother’s chest) was only 14.8 ounces upon his birth

‘Survival at this gestational age has never happened before, so before Curtis was born his chances of survival would have been far less than one  percent,’ Dr Colm Travers, a professor in the neonatology division of the University of Alabama. Birmingham, where Curtis was born.

Michelle Butler, Curtis mother, was not expecting to have her child prematurely until she suddenly required hospital treatment on July 4 for an unknown reason.

Her son was born a day later and, because of his low weight and severe prematurity, doctors feared he was not going to live.

‘The medical staff told me that they don’t normally keep babies at that age,’ Butler told Guinness World Records. 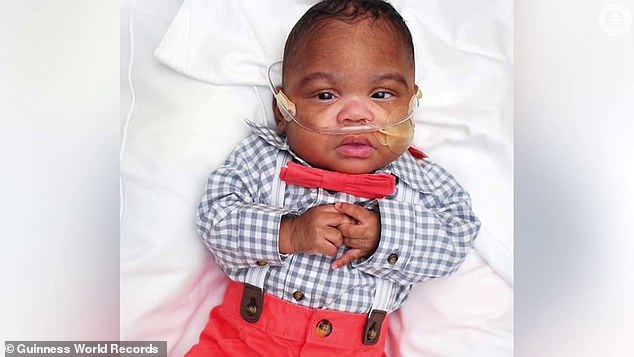 Means (pictured) required intensive hospital treatment for 275 days in order to survive, though doctors report that he responded well to treatment 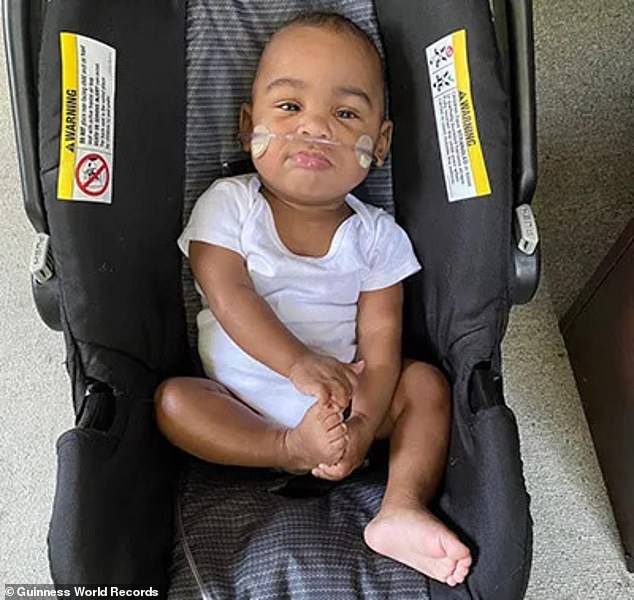 Means (pictured) turned one years old in July, marking an incredible milestone in his life

Babies who are born premature are often smaller, and often suffer from lung issues because those are the last vital organs that develop in the womb.

They are also more likely to be born with intestinal, hearing, vision or dental problems.

Butler also gave birth to a twin sister, C’Asya, who unfortunately died after only one day.

Curtis responded well to treatment and slowly grew and gained strength over time.

‘He showed initially that he responded to oxygen, his heart rate went up, his numbers went up…’ Dr Brian Sims, the attending physician for Curtis, said in a statement.

‘He was giving us a lot of positive feedback that…he wanted to survive.’

Curtis’s ability to survive, despite how small and fragile, he was at the time surprised doctors as well.

‘The first thing that struck me when I saw Curtis was how tiny he was, how fragile his skin was. I was amazed at such a young age that he was alive and that he was responding to the treatments,’ Travers told Guinness World Records.

‘Initially Curtis was on a lot of breathing support and medication for his heart and lungs to keep him alive.’

‘Then over the next several weeks, we were able to decrease the amount of support… When he was about three months old, we were finally able to take him off the ventilator. That was a special moment for me. 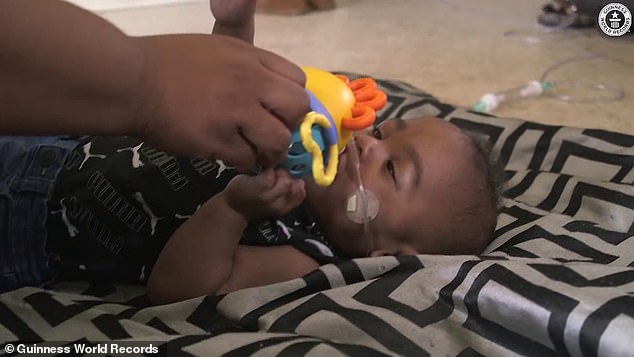 While he still required the use of supplemental oxygen and a feeding tube, Means (pictured) is reportedly energetic and healthy living at home with family 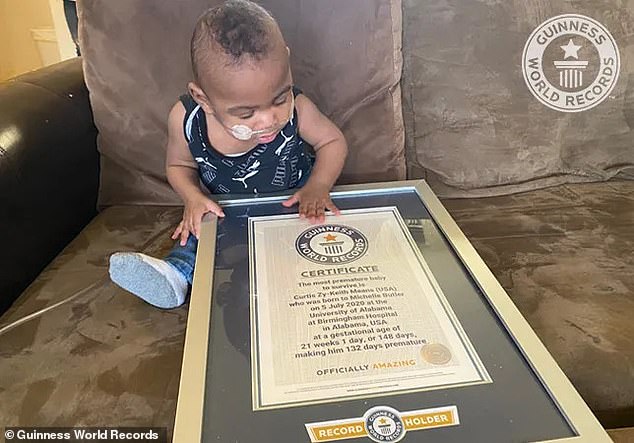 On April, 6, 2021, 275 days after his birth, Curtis was declared strong enough to go home, an amazing feat for a child born in the state he was.

‘When he was going home, the feeling we had was of being privileged to have been able to take care of him and his mum,’ Travers told Guinness World Records.

While he still does require a feeding tube and supplemental oxygen to assist him, Curtis is healthy at home with his family now.

In July he turned one year old, and ,this November he reached what his one year birthday would have been had he been born full-term.

‘I’m very proud of him because where he came from and where he at now, I can tell the difference.

‘Having this record is a blessing that he has accomplished and I’m thankful that [Guinness World Records] accepted him.’

Curtis was born one month to the day after Richard Hutchinson, who was born at 21 weeks and two days, who was previously named the most premature baby to ever survive.

PREMATURE BIRTH CAN CAUSE LIFELONG PHYSICAL AND DEVELOPMENTAL PROBLEMS

Almost one out of every 10 infants in the US is born prematurely.

A birth is premature if the baby arrives at least three weeks early – or prior to 37 weeks of pregnancy.

Premature babies or ‘preemies’ are often underweight and small.

They suffer a greater risk of breathing problems, feeding problems and are more susceptible to contracting infections.

Sometimes, preemies continue to have delayed physical growth and development.

Early birth has been linked to broad behavioral and personality issues, thought to be caused by abnormalities in brain development.

The lungs are one of the last vital organs to fully develop – only becoming mature after 32 weeks – so preemies frequently suffer from asthma and other pulmonary problems.

Children born prematurely are also more likely to later have intestinal, hearing, vision and dental problems and get frequent infections.

Premature birth is the largest cause of infant mortality in the US.