Michael Brandon Samra, 41, was executed by lethal injection in Alabama on Thursday

Alabama has executed a man for a quadruple killing in 1997 that followed a dispute over the use of a pickup truck.

Michael Brandon Samra, 41, was given a lethal injection at 7.14pm on Thursday at the state prison in Atmore. Prison officials said his official time of death was 7.33pm.

Samra smiled as the warden approached him to ask for his last words, and said: ‘I would like to thank Jesus for everything he’s done for me. Thank you for your grace Jesus, amen.’

The killer refused breakfast as well as a last meal, and made no special requests in the run-up to his execution.

Samra and friend Mark Duke were convicted of killing Duke’s father, the father’s girlfriend and the woman’s two elementary-age daughters in March 1997.

Evidence showed Duke planned the killings because his father wouldn’t let him use his pickup. The father and the girlfriend were shot and the children had their throats slit. 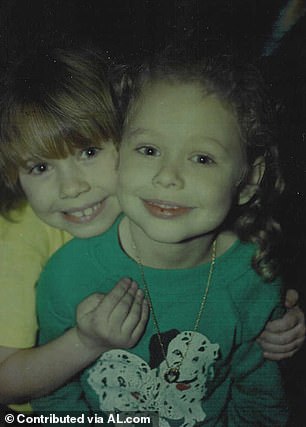 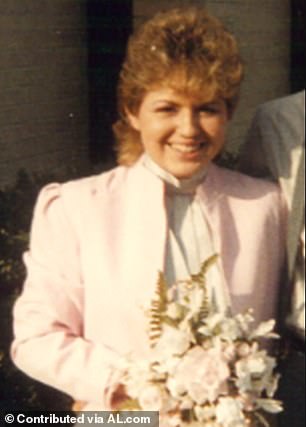 Chelisa, six, and Chelsea, seven, (together left) had their throats slit, while their mother Dedra Hunt (right) and her boyfriend Randy Duke were shot to death

Duke and Samra both were originally sentenced to death, but Duke’s sentence was overturned because he was 16 at the time of the killings. Samra was 19 at the time.

Samra’s two attorneys and spiritual adviser were present to witness his execution, according to AL.com.

The curtains to the execution chamber opened at 7.09pm, and after delivering his last words Samra’s eyes closed at 7.14pm.

At 7.17pm, Samra did not respond to a consciousness check performed by a corrections officer.

Two minutes later, he stretched both hands and slightly raised his left arm, then curled his fingers and dropped his arm.

The curtain to the chamber closed at 7.26pm.

Horton said Samra also met earlier with his attorneys, who will be among the witnesses when he is put to death.

The spokesman said seven relatives of the victims planned to witness the execution, but none of Samra’s family attended.

Alabama Governor Kay Ivey, who made national news this week by signing a sweeping ban on abortions in the state, refused a reprieve for Samra, the prisoner’s lawyer said. 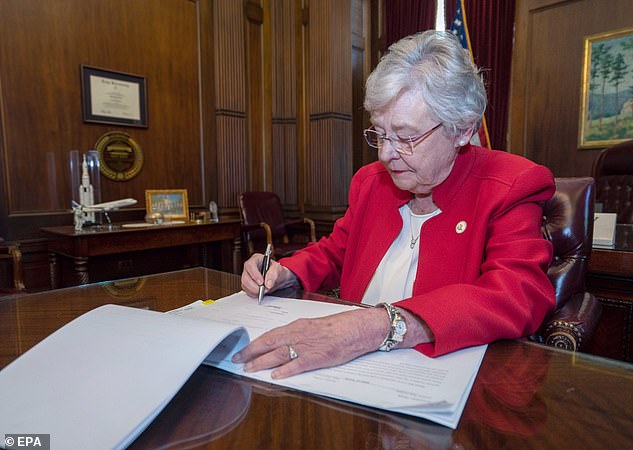 Alabama Governor Kay Ivey (above), who made national news this week by signing a sweeping ban on abortions in the state, refused a reprieve for Samra

Alabama Attorney General Steve Marshall released this statement on the execution of Samra:

‘On March 23, 1997, Michael Samra and his friend Mark Duke coldly executed their plan to murder Duke’s father, Randy Duke, along with his father’s girlfriend, Dedra Hunt, and her six- and seven-year-old daughters, Chelisa and Chelsea. One cannot possibly imagine a more terrifying ordeal for the victims.

‘Randy Duke was shot in the head. Dedra Hunt was shot multiple times as she attempted to flee with one of her daughters.

‘Samra and Duke then proceeded to kill both of the young girls, cutting their throats. Samra was convicted of capital murder in 1998 and received his just punishment: a sentence of death.

‘After too many years of delay, justice has finally been served. Tonight, we pray for the victims and for their families, that they might find peace and closure.’

A statement from the families of victims released after the execution thanked the community for support on their ‘painful journey’ and added: ‘Today justice was carried out.’