Students at an Alabama high school are facing discipline after they were photographed wearing sweatshirts saying ‘Demon Chasin N*****’.

A photo of two students wearing the sweatshirts in a hallway at Ardmore High in Limestone County was shared on Snapchat with the caption ‘They let them wear this to school?’.

When a teacher was made aware of the photo, it was reported to school officials and the students, believed to be minors, were punished.

‘The students’ actions are a violation of the core values of our schools system and do not represent the student body,’ Tucker told WHNT. ‘We hold our students to the highest standards and we will not tolerate this type of behavior.

‘LCS remains committed to the safety of our students. We have rules and regulations on preventing, recognizing and reporting bullying and insensitive behavior as well as curriculum for students at all grade levels.

‘We will continue to take every appropriate measure to ensure that our schools are safe and welcoming places for students to learn.’ 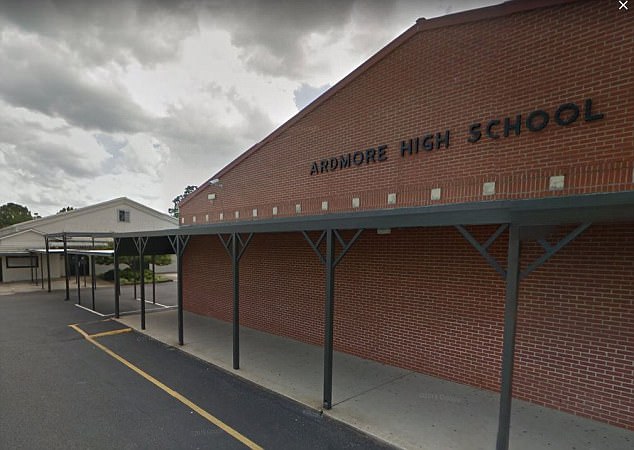 In the photo, the two boys can be seen wearing the offensive black sweatshirts, along with matching white shorts, red headbands and black shoes and socks.

They both have their right hand up in a horn gesture, which can also be interpreted as ‘rock on’.

This week was Ardmore High School’s Homecoming, and as part of spirit week Wednesday was dubbed ‘twin day’, where you and a friend dress exactly the same.

Although it is not known exactly when the Snapchat photo was taken, it is possible it was snapped on twin day, as the boys are wearing matching outfits.

Ardmore, which sits on the border of Alabama and Tennessee, has a population of just over 1,300.