Attorney and Harvard Law School professor Alan Dershowitz branded CNN and the New Yorker ‘the real vigilantes’ in the Rittenhouse case for ‘convicting’ him before the trial.

During an interview with Breitbart’s Joel Pollak on the SiriusXM show, Dershowitz said he hoped that the 18-year-old should be acquitted on murder charges for fatally shooting two and wounding a third during unrest in Kenosha last year.

He also blasted left wing media for trying and convicting Rittenhouse in the court of public opinion, while supporters of Rittenhouse confronted Black Lives Matter protestors outside of the courthouse on Tuesday during jury deliberations.

‘CNN and some of the other TV stations have become vigilantes,’ he said. ‘They’re the vigilantes, not Rittenhouse. They’re the ones who want to put not the thumb, but the elbow on the scale of justice. They want to influence the outcome of this case.’

Eighteen jurors began deliberating Tuesday at the murder trial of Kyle Rittenhouse, 18, after listening to dueling portrayals of him as a ‘wannabe soldier’ who left his home in Illinois armed and looking for trouble, or a concerned citizen who came under attack while trying to protect property in Kenosha.

As their hushed deliberations began away from public view, protesters descended on the courthouse.

Jurors called time on their deliberations shortly before 6pm, and will resume on Wednesday morning. Five hundred National Guardsmen remain on stand-by near Kenosha, ready to step in if the situation escalates. 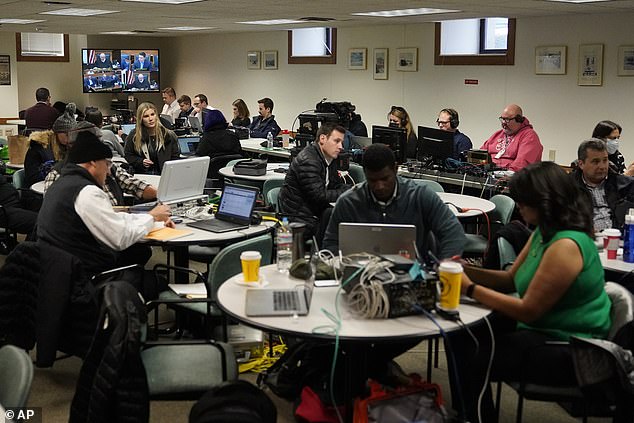 ‘CNN and some of the other TV stations have become vigilantes,’ Dershowitz said. ‘They’re the vigilantes, not Rittenhouse’ 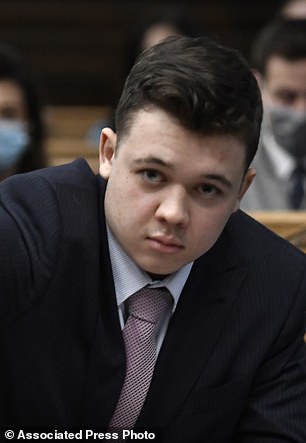 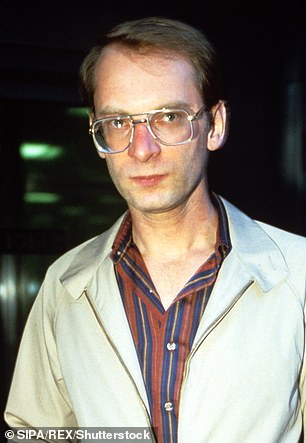 Dershowitz contended that there was no tangible evidence to convict Rittenhouse (left), and compared his situation to that of infamous New York subway vigilante Bernhard Goetz (right), who shot four young black men in 1984, only to be acquitted of murder charges on self-defense grounds.  Rittenhouse fatally shot two and wounded a third during unrest in Kenosha last year

Dershowitz slammed media outlets for meddling in the case without legal grounds and asserted that Rittenhouse truly believed his life was in danger and acted in self-defense.

‘And there are others who are threatening violence if there is anything but convictions in this case, as they threatened violence in previous cases and will in subsequent cases unless something is done about it. It’s The New Yorker and CNN that are the vigilantes. They’re the ones who are trying to influence justice without regard to evidence or the law,’ Dershowitz went on to say.

Dershowitz contended that there was no tangible evidence to convict Rittenhouse, and compared his situation to that of infamous New York subway vigilante Bernhard Goetz, who shot four young black men in 1984, only to be acquitted of murder charges on self-defense grounds.

‘He [Rittenhouse] should be acquitted. There shouldn’t even be – the jury should not be even able to consider the attempted murder of the guy who admitted on the witness stand he pointed a gun at him before was shot in the shoulder. That is a clear case of self-defense, no doubt about it, and it should never go to the jury,’ Dershowitz said.

Host Joel Pollak also brought up the fact that Rittenhouse had been knocked on the head with a skateboard by one of the fatal victims before the shooting, and Dershowitz agreed that a head injury might have affected Rittenhouse’s judgment of the situation.

The moderate Democrat also offered some insight into why the outcome of the trial depended on the jury, and said that judges do not want to be the subject of vilification for convicting or acquitting the defense.

‘Judges don’t want to be responsible for letting defenses go free. They would much prefer to let the jury do it, which s why the judge didn’t declare on this trial,’ Dershowitz said.

With the jury quietly tucked away deliberating Kyle Rittenhouse’s fate, decorum outside the Wisconsin courthouse dissolved into angry protests on Tuesday with the arrival of BLM activists and Second Amendment enthusiasts. 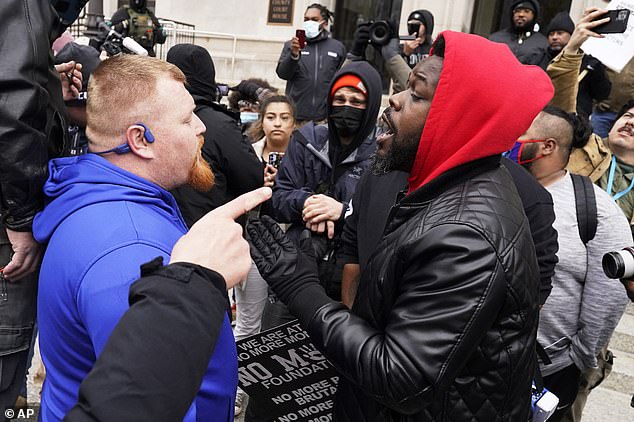 Protesters argue outside the Kenosha County Courthouse, Tuesday, Nov. 16, 2021 in Kenosha, Wis., during the Kyle Rittenhouse murder trial. Rittenhouse is accused of killing two people and wounding a third during a protest over police brutality in Kenosha, last year 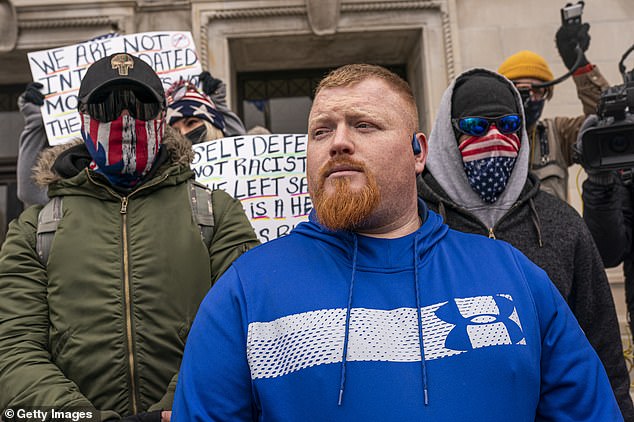 Supporters of Kyle Rittenhouse stand in front of the Kenosha County Courthouse while the jury deliberates the Rittenhouse trial on November 16, 2021 in Kenosha, Wisconsin 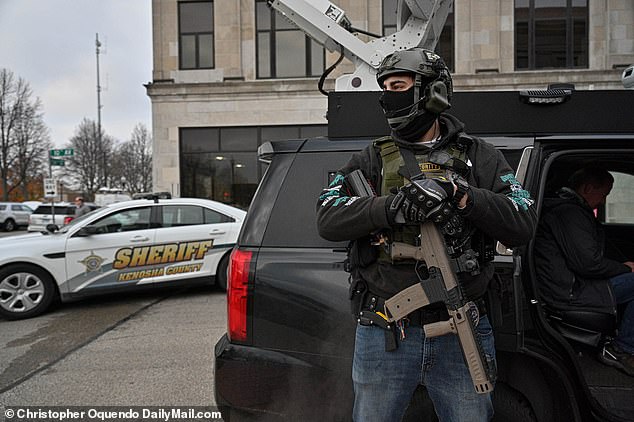 An armed security guard wearing riot gear was among those outside. The guard told DailyMail.com he had been hired by a TV station to provide security for journalists who had been threatened recently 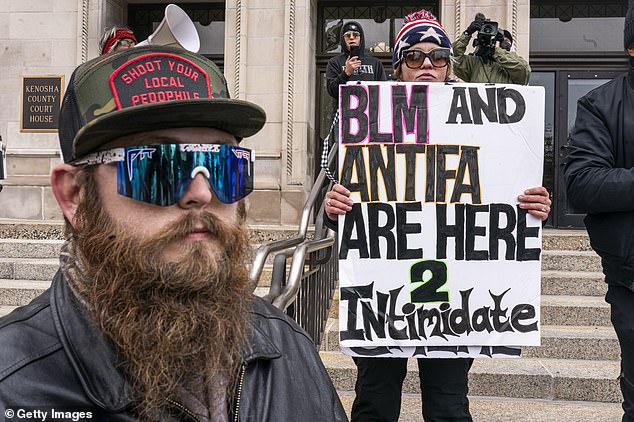 Supporters of Kyle Rittenhouse stand in front of the Kenosha County Courthouse while the jury deliberates the Rittenhouse trial on November 16, 2021 in Kenosha, Wisconsin

The jury has now begun deliberating whether or not to convict the teenage gunman, whose case has divided the nation. Rittenhouse, now 18, was 17 when he shot dead two white BLM protesters at a riot in Kenosha, Wisconsin, last August, and injured a third.

His lawyers say he was a scared boy acting in self-defense, eager to protect the town as it fell under siege from an angry mob. Prosecutors tried to paint him as a bloodthirsty vigilante and an embodiment of the systemic racism his victims were protesting against.

The jury began discussions this morning, after a dramatic two-week trial and as their hushed deliberations began away from public view, protesters descended on the courthouse.

An armed security guard wearing riot gear was among those outside. The guard told DailyMail.com he had been hired by a TV station to provide security for journalists who had been threatened recently.

During closing arguments Monday, prosecutor Thomas Binger argued that Rittenhouse set the deadly chain of events in motion by bringing a semi-automatic rifle to a protest and menacing others, then walked off like a ‘hero in a Western.’

Rittenhouse had gone to Kenosha from his home in Antioch, Illinois, in what he said was an effort to protect property from rioters in the days after a Black man, Jacob Blake, was shot by a white Kenosha police officer. 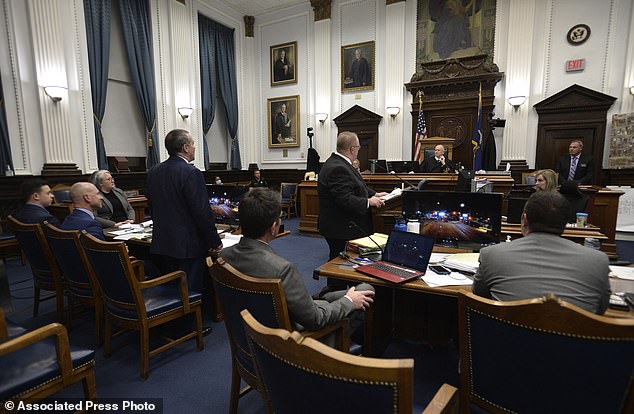 Attorneys argue without the jury in the room during Kyle Rittenhouse’s trial at the Kenosha County Courthouse in Kenosha, Wis, on Monday 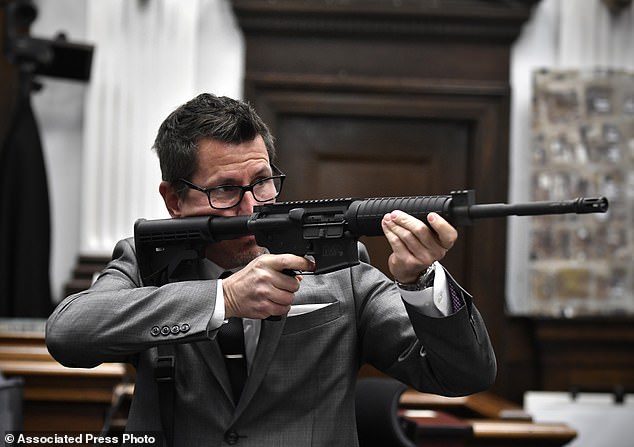 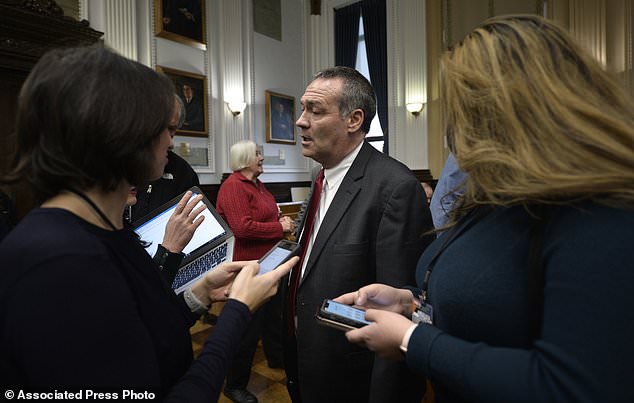 Mark Richards, center, talks with reporters after the jury leaves the room for deliberations during Kyle Rittenhouse’s trial at the Kenosha County Courthouse 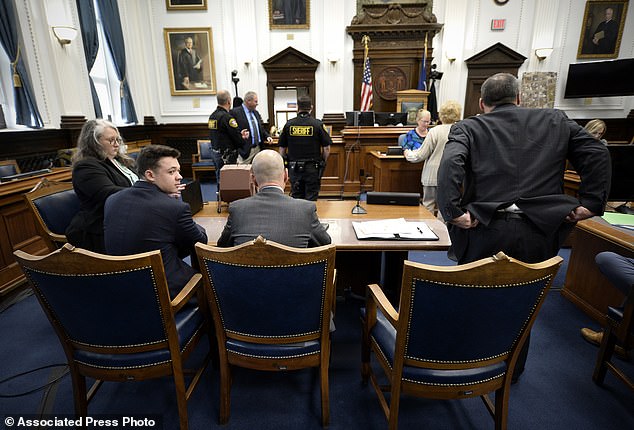 Kyle Rittenhouse, second from left, waits with his legal team for the day to start at his trial at the Kenosha County Courthouse in Kenosha on Monday

Binger said Rittenhouse was ‘looking for trouble that night,’ and he repeatedly showed the jury drone video that he said depicted Rittenhouse pointing his weapon at demonstrators.

In making his case for self-defense, Rittenhouse testified that Rosenbaum chased him down and made a grab for his rifle – testimony largely corroborated by video and some of the prosecution’s own witnesses.

As for Huber, he was gunned down after he was seen on video hitting Rittenhouse with a skateboard. And Grosskreutz admitted he had his own gun pointed at Rittenhouse when he was shot.

In his instructions to the jury, Schroeder said that to accept Rittenhouse´s claim of self-defense, the jurors must find that he believed there was an unlawful threat to him and that the amount of force he used was reasonable and necessary.