If you wanted to be the Prime Minister of Australia or the Premier of New South Wales, you had to talk to Alan Jones – it was as simple as that.

For 35 years, Jones was the undisputed king of talkback radio in Australia. He was feared, respected and often despised.

Jones, 79, sensationally announced on Tuesday that he was hanging up his headphones at the end of the month.

The shock resignation – which will see Jones pass the top job to Ben Fordham, 43 – is the end of an era not just in the media, but in Australian politics.

The broadcaster made, broke and regularly belittled the nation’s leaders and political wannabes over the past three decades.

State premiers would grovel to Jones and seek to wine and dine him.

Meanwhile, prime ministers chose one of two paths: submit to his thunderous questioning or ignore him and his vast, conservative-leaning audience altogether. 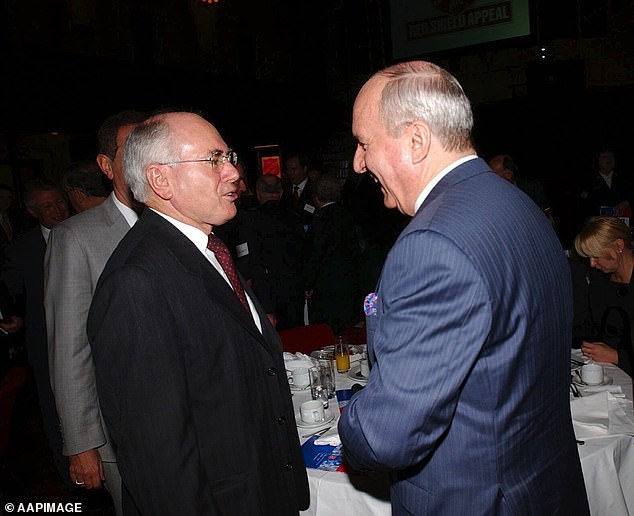 Former prime minister John Howard lavished Alan Jones with attention when he was in the top job, allowing him to speak to his ‘battlers’ in Sydney’s west 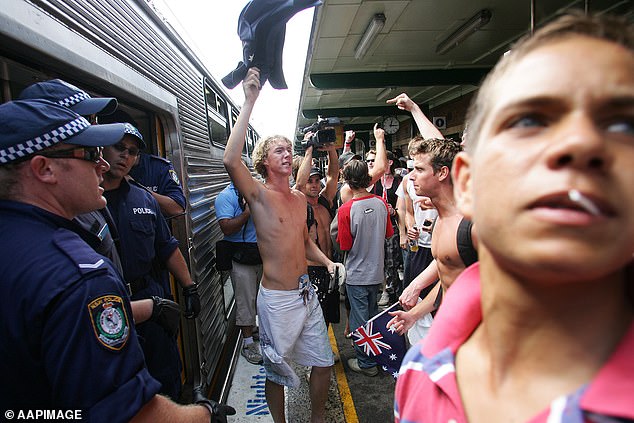 ‘He picks and he sticks,’ said a political insider who has both clashed and had a favourable relationship with Jones over the years.

Jones’ departure was officially ascribed to his long-standing health issues. He was off sick all last week, with colleague Chris Smith filling in.

But it also follows long negotiations over his last contract, a $3.4 million defamation payout to a Queensland farming family in 2018, and persistent industry whispers about pay cuts for senior Nine personalities due to the surprise, post-coronavirus return of the NRL.

Make or break, pick and stick

‘You’ve always spoken your mind to everyone, including me, and we’ve had one or two disagreements, but you’ve always done the right thing for your country’, Mr Morrison said.

In a landmark ABC television documentary about Jones in 2001, biographer Chris Masters said: ‘There is no mistaking Jones’s power. He has been credited with influencing the outcomes of state and federal elections.’

‘Pity help anyone who agreed to an interview with Alan without knowing his or her subject’, Mr Howard said today.

Tony Abbott was likewise a Jones favourite. Only recently, Jones suggested in an opinion column that Abbott, the former Federal health minister, should run the World Health Organisation.

But modern history is littered with other leaders who have fallen afoul of Jones, most recently Malcolm Turnbull and Julia Gillard. 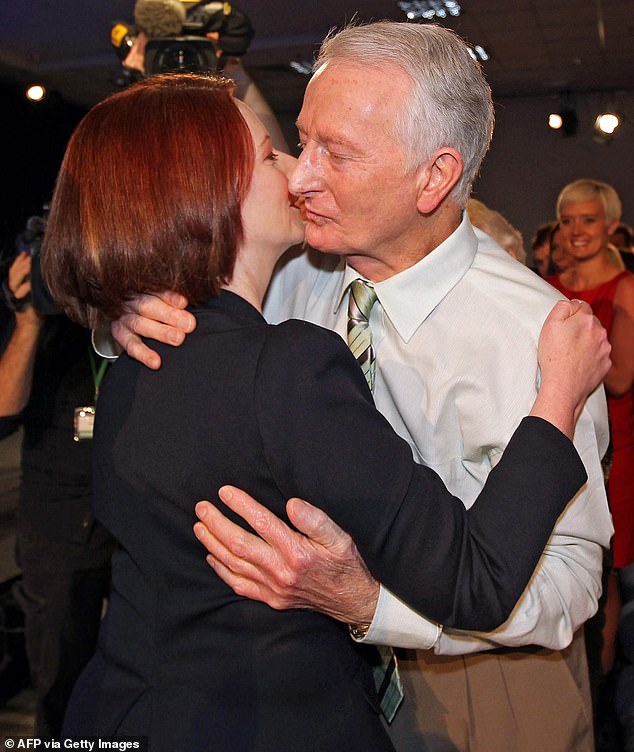 The unmistakable low point in Jones’s career were his offensive remarks about then prime minister Julia Gillard’s father, John, ‘dying of shame’. Ms Gillard and her dad in 2010 above

No obituary about Jones’s career could go without mentioning his vicious attacks on Ms Gillard as prime minister.

Jones made waves in July 2012 by saying Ms Gillard and Greens leader Bob Brown should be ‘shoved’ in a chaff bag, dumped out to sea and told to ‘swim home’.

‘The old man recently died a few weeks ago – of shame,’ Jones said. ‘To think that he had a daughter who told lies every time she stood for Parliament’.

To make matters worse, Jones had autographed a chaff bag to be raffled off on the night.

Jones publicly apologised to Ms Gillard, saying it was an ‘offhand remark’. But the backlash, fuelled by social media, was unprecedented. 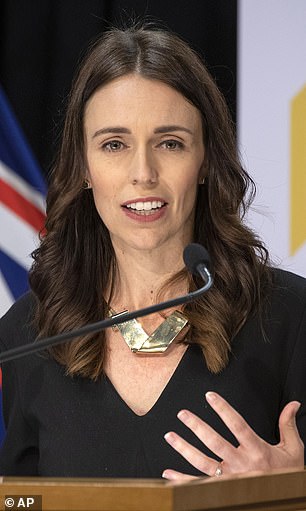 Frightened advertisers pulled their ads in droves after barrages of scathing tweets and Facebook comments from punters.

Macquarie Radio, the then owner of 2GB, even suspended all advertising on the Alan Jones Breakfast Show program for weeks.

Commentators speculated the end was nigh for Jones’s already long and successful career, but the drama blew over.

Ms Gillard refused to take a personal call from Jones and chose to basically ignore the broadcaster throughout the rest of her term.

He was hardly in her corner anyway – joining a ‘convoy of no confidence’ rally against the carbon tax in Canberra in 2011, where a protester displayed a sign reading: ‘Ditch the witch’.

The powerful broadcaster sparked a more mild backlash when he said Scott Morrison should ‘shove a sock’ down the throat of New Zealand PM Jacinda Ardern last August.

One of the most revealing accounts of dealing with Jones as a person in power comes from Malcolm Turnbull’s recently released memoir.

(Jones has described the book as a ‘work of fiction’.)

Turnbull shared a diary entry about a personal call he had with Jones in 2014, the night prior to a radio interview, when he was Communications Minister. 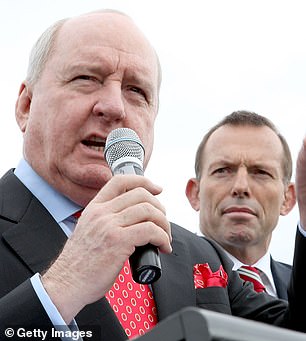 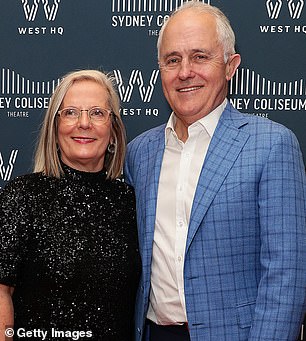 Friend and foe: Jones is pictured with his friend, former prime minister Tony Abbott, during a protest against Julia Gillard’s administration. His successor, Malcolm Turnbull (right, with wife Lucy), fell out of Jones’s good books

‘I tried to persuade him to stop this mad jihad against me …. Jones was totally hysterical, screaming (literally) at me,’ Turnbull recalled.

‘He kept accusing me of being a traitor, a treacherous schemer.

‘He said again and again, ‘I love Tony Abbott, and I will stand between him and anyone who tries to undermine him and that means you Malcolm Turnbull’.

The next morning, Jones began his interview with Turnbull as follows.

Jones: ‘Can I begin by asking you if you can say after me this: ‘As a senior member of the Abbott government I want to say here I am totally supportive of the Abbott/Hockey strategy for budget repair.’

Turnbull replied: ‘Alan, I am not going to take dictation from you. I am a cabinet minister’.

The former PM boasted: ‘I’d stood up to Jones: few politicians do that.’

Controversy and sticking up for ‘Struggle Street’ 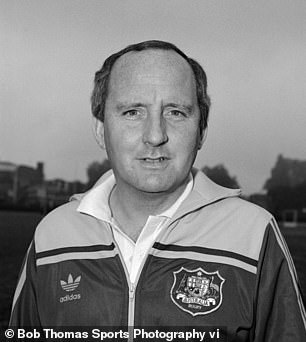 In researching an autobiography written about Jones – which the radio host never cooperated with – ABC journalist Chris Masters wrote that he found several different versions of the man.

Among them were the ‘blokey, foul mouthed’ rugby coach’, the ‘courtly, non-swearing charmer of old women’ – something that plays well with his radio audience – and the ‘farmer’s son’.

Jones was born in 1941 to a school teacher mother and a father who farmed and coal mined in rural south-east Queensland.

He coached tennis and rugby during those years – bringing about his career as a professional rugby coach.

As Wallabies coach, Jones took Australia to an incredible Bledisloe Cup victory in 1986 after a 39 year drought.

Masters also described Jones as both an ‘Oxford orator’ and a ‘thwarted prime minister’ – having studied at the prestigious English university for a year, written speeches for Malcolm Fraser and made an unsuccessful tilt for Parliament in the 80s. 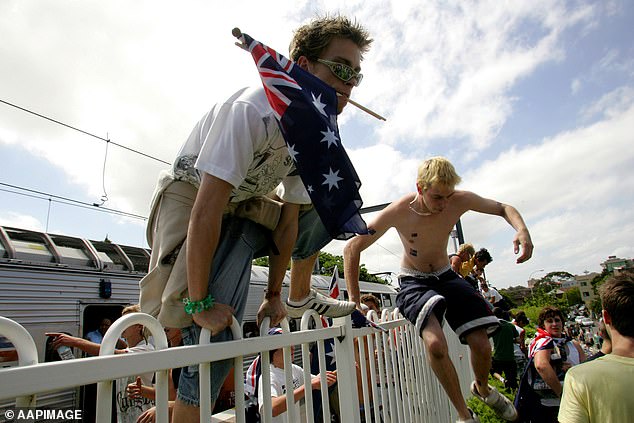 It was in 1985 when he made the jump to radio, joining then-influential broadcaster 2UE in the morning show slot. It was the beginning of a career which Masters described as the ‘ombudsman of Struggle Street’.

Jones pick up his listeners’ causes and issues and passionately championing them, most prominently holding politicians’ feet to the fire to support farmers through the drought.

He was pushed into the breakfast role when star presenter John ‘Golden Tonsils’ Laws returned to 2UE in 1988 and has dominated the airwaves in that space ever since.

Blips on his record include an arrest in a London public toilet – which has seen him cop incessant speculation about his sexuality ever since – and the national cash for comment inquiry in the 1990s, which led to changes in broadcasting rules.

One of Jones’s best known run-ins with the media regulator came after he read out a text message already circulating in the community that was encouraging race riots in Cronulla in 2005.

The text Jones read out said: ‘Come to Cronulla this weekend to take revenge. This Sunday every Aussie in the Shire get down to North Cronulla to support the Leb and wog bashing day.’

The Australian Communications and Media Authority found in 2007 that Jones had broadcast material likely to encourage violence and vilify people of Middle Eastern backgrounds. Jones was censured and fined.

But listeners continued to reward him with the top spot in the ratings until that infraction was long forgotten, and he hasn’t surrendered his post since.

Even Media Watch – the ABC program Jones often found himself dissected by – tweeted praise for Jones on Tuesday.

‘There’s been many stoushes but Jones’ commitment to his listeners, his tireless work ethic and ratings success, is to be congratulated,’ the tweet said.

On Tuesday, following a week’s absence, Jones said: ‘We are living in the world of coronavirus. 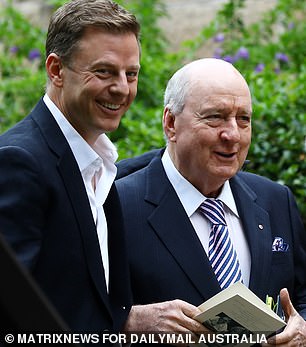 Passing the torch: Jones with his successor, Fordham, at the funeral of John Laws’s wife Caroline in March

‘The most repeated statement we hear is ‘we must listen to the experts’.

‘Well, the experts are telling me in no uncertain terms, and not for the first time I might add, ‘continuing with the present workload is seriously detrimental to your health’.

‘I have listened to the experts and I am taking this opportunity to indicate to my radio family that I will be retiring from radio at the end of this month.’

Jones will continue to write for the newspaper and with his Sky News television show.

The last blast of Jones’s introductory song, Gloria, will be on May 29.

Politicians are expected to call in in large numbers, but it won’t be the same.