An Alan Partridge fan may have secured himself a date after passing off the fictional Radio Norwich presenter’s wit as his own on Tinder.

Dan North, 20, started reciting words from the famous Steve Coogan character when asked on the dating app what his favourite Beatles album was.

He ended up sending 23 messages quoting the iconic BBC comedy, before eventually doing the honourable thing and coming clean.

Luckily the woman took the joke in good spirits, and the pair may still be going on a date. 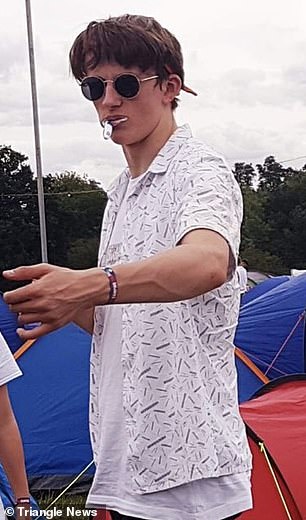 Dan North, 20, began reciting words from the famous Steve Coogan character when asked on dating app Tinder what was his favourite Beatles album 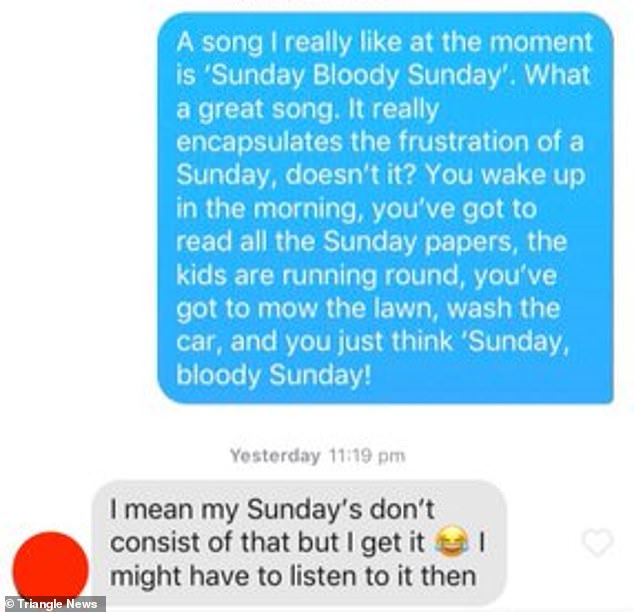 Mr North started channelling his inner Partridge when he was asked whether he liked the Beatles.

He replied: ‘My favourite Beatles album has to be The Best of the Beatles.’

When asked about his music taste, he once again quoted the Coogan character.

Mr North, of Stansted, Essex, said: ‘I’ve got a broad taste, from Britpop bands like Def Leppard and UB40, right back to classic rock as I mentioned previously like Wings.’

This appeared to go down well with his would be date, who responded: ‘Oh nice I like it, usually everyone listens to s**t but your music taste is decent to be fair.’ 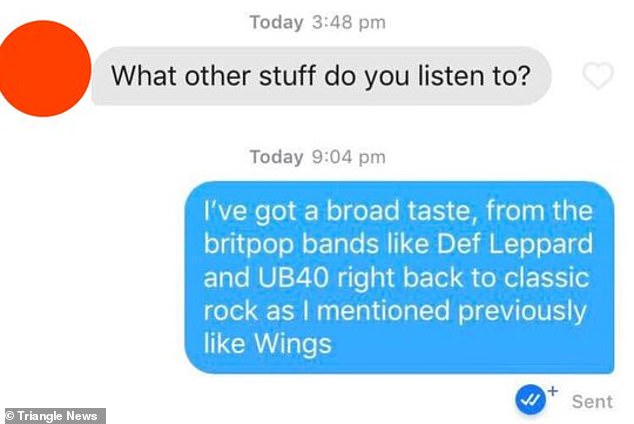 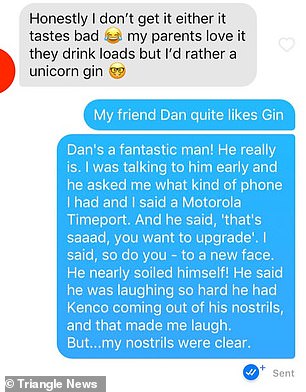 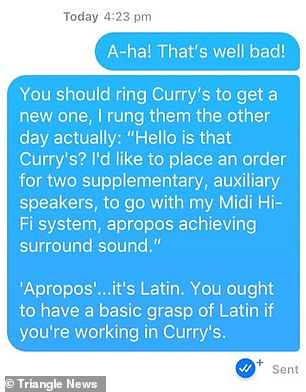 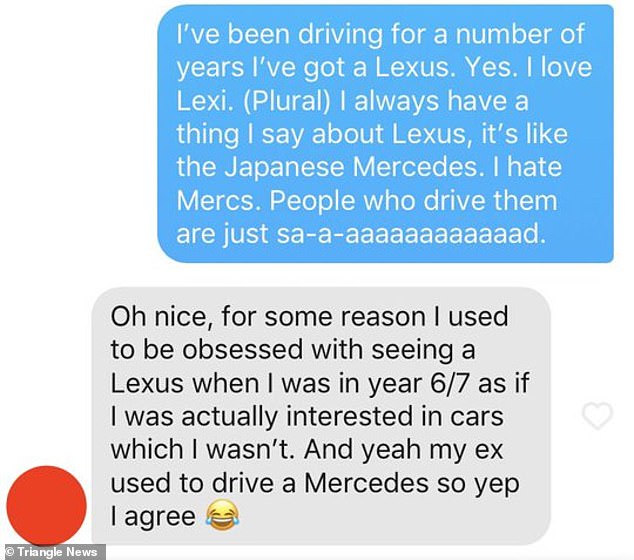 Mr North continued quoting the fictional radio DJ, telling his match that he loved Lexi – the plural of Lexus

Now Coogan fan Mr North was in his stride.

He said: ‘A song I really like at the moment is Sunday Bloody Sunday.

‘What a great song.

‘It really encapsulates the frustration of a Sunday, doesn’t it?

‘You wake up in the morning, you’ve got to read all the Sunday papers.

‘The kids are running round, you’ve got to mow the lawn, wash the car and you just think: Sunday, bloody Sunday!’

His match replied: ‘I mean my Sundays don’t consist of that but I get it, might have to listen to it.’

Mr North regaled his date with an anecdote about going to McDonalds, saying: ‘Went to Maccies after and had one of their apple pies for the first time. 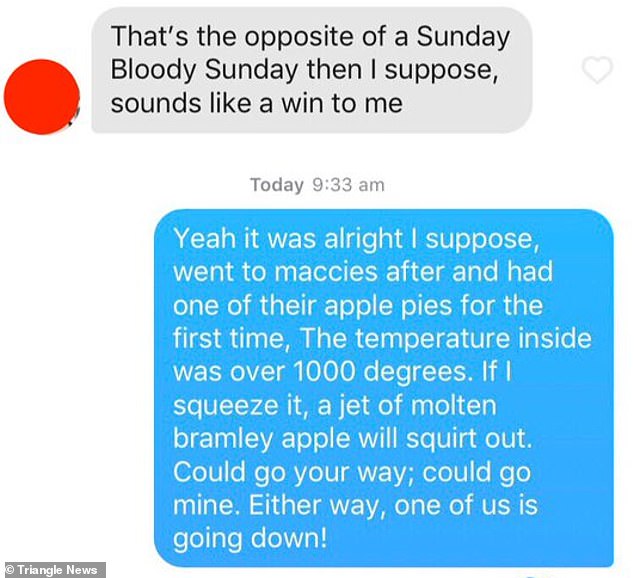 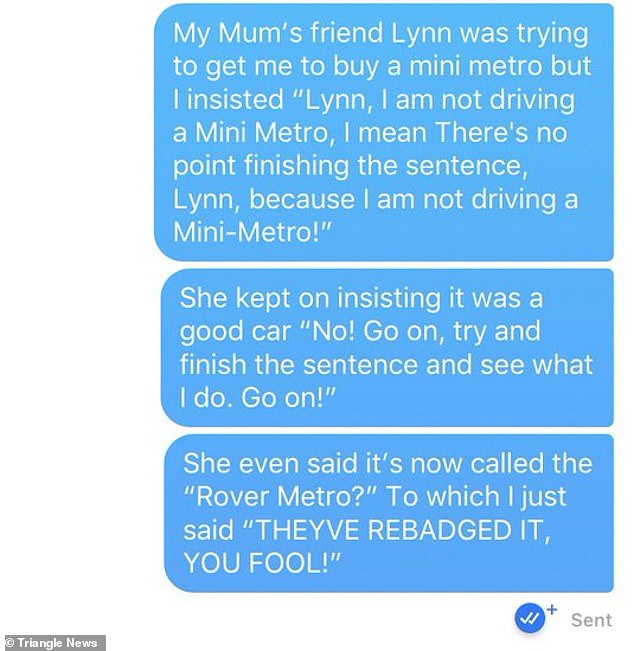 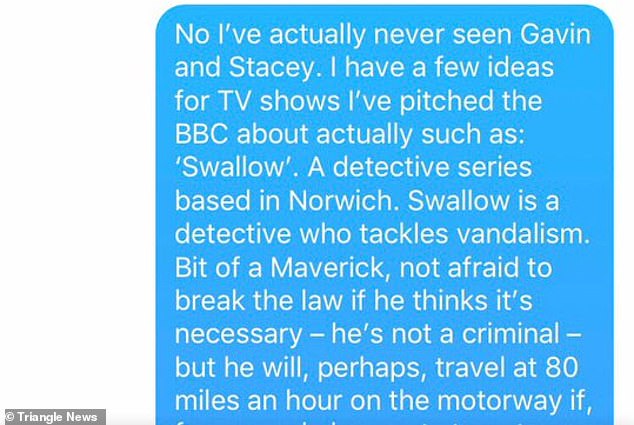 It looks like Alan Partridge may have a new fan, thanks to Mr North’s unique flirting style

‘The temperature inside was over 1000 degrees. If I squeeze it, a jet of molten bramley apple will squirt out.

‘Could go your way, could go mine. Either way, one of us is going down!’

This went on for several hours, before Mr North eventually came clean.

Luckily the woman took it in good humour and replied: ‘Hahaha, wow, well thanks for entertaining me then. 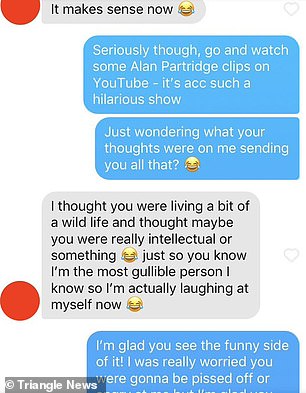 It looks like Alan Partridge may have a new fan, thanks to Mr North’s unique flirting.

Afterwards he said: ‘As soon as she messaged me saying ‘Do you like the Beatles?’ I was like, let’s see how far this goes.

‘I thought it may have gone too far, after going on about ”my friend Dan being a fantastic man”.

‘I did feel a bit sorry for her, but I’m glad she saw the funny side.’

And Mr North said a date could be on the cards.

‘I wouldn’t say no to dinner and watching some Alan Partridge after,’ he added.