Alan Tudge: Minister stands aside as he abuse denies claims

Alan Tudge has been stood down as Education Minister after his former staffer claimed their affair was at times abusive.

Prime Minister Scott Morrison said Mr Tudge – who denies the allegations – agreed to step aside while his department conducts an independent inquiry.

Rachelle Miller, Mr Tudge’s former press secretary, made their consensual relationship public a year ago but revealed further details on Thursday in a plea for change to workplace culture in Parliament House.

She alleged that on one occasion Mr Tudge kicked her until she left his bed after her phone rang early one morning and he became frustrated it woke him.

‘I completely and utterly reject Ms Miller’s version of events,’ Mr Tudge said in a statement on Thursday.

‘Ms Miller and I had a consensual affair in 2017 as both of us have publicly acknowledged. This is something I deeply regret.’

Announcing that Mr Tudge has been stood down, Mr Morrison told Parliament: ‘These issues are obviously deeply concerning and I know deeply distressing, for Ms Miller, minister Tudge and the families affected by these events.

‘I have discussed Ms Miller’s statement with Mr Tudge, who refuted the allegations made.

‘Given the seriousness of the claims made by Ms Miller, it’s important these matters be resolved fairly and expeditiously. 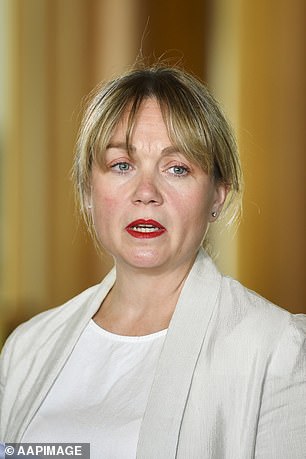 ‘To this end, the minister has agreed to my request to stand aside while these issues are addressed by my department, through an independent and fair process, to ensure that the matters that have been raised can be properly assessed and the views put by the respective parties in relation to these issues.’

Mr Morrison said he has made no judgement about Ms Miller’s claims.

‘Mr Speaker this will enable my department to provide me with any further advice regarding any implications for the ministerial standards,’ he said.

‘But I wish to stress that this action, in no way seeks to draw a conclusion on these matters, Mr Speaker. But this is the appropriate action for me to take under the ministerial standards.’

Ms Miller previously said her relationship with Mr Tudge – which occurred while both were married – was consensual but on Thursday she said it was much more complicated than that.

‘I was so ashamed, so humiliated, so scared. I was exhausted. I told a small part of the story,’ she told reporters in Canberra on Thursday.

Ms Miller said speaking through the media was the only way the government would listen to calls for changes to parliament’s workplace culture.

Ms Miller said no one from the government, aside from one female chief of staff sending a text, contacted her to see if she was OK after she went public more than a year ago.

Her repeated pleas for meetings with the prime minister and ministers, including Linda Reynolds, fell on deaf ears, she said.

‘When I spoke out more than a year ago… I wanted to spark a debate, but I was too unwell to continue to publicly advocate,’ she said.

‘All I ever wanted was for the government to listen and to acknowledge our experiences in this building.’

Ms Miller said the government had delegated women the job of listening to the awful experiences of other women in parliament and politics.

‘This is entirely a men’s issue, and specifically the men in (parliament).

‘The Liberal party doesn’t have a women problem, it has a men problem.’ 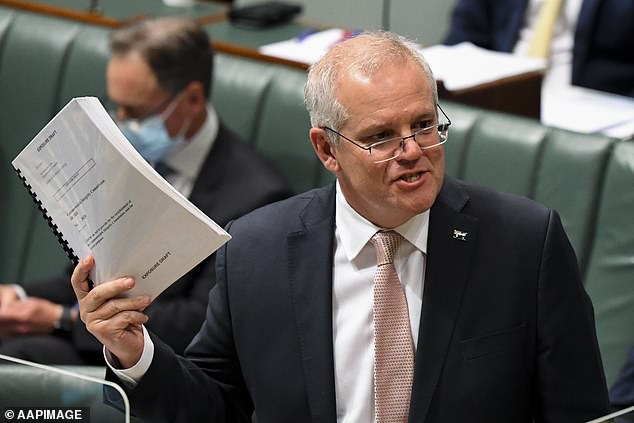 Ms Miller also chastised Labor for staying silent on the issue ‘because they have just as many skeletons’.

‘Unfortunately, it’s a sad reality that the perpetrators are the ones who must change the laws to make themselves accountable,’ she said

‘Why is it up to the women survivors to fight for change?

‘We should not have to fight. We have no fight left.’

Liberal senators Jane Hume and Hollie Hughes threw their support behind Mr Tudge, saying he should not resign because the original allegations were not substantiated by a finance department investigation.

Senator Hughes described the claims as a case of ‘he said, she said’ and questioned what Ms Miller wanted the government to do.

Senator Hume said significant changes had been made already.