By Sportsmail Reporter For The Mail On Sunday

The 22-year-old was mobbed by friends and family after crossing the line in 49.97secs behind winner Kyron McMaster of the British Virgin Islands and Jaheel Hyde from Jamaica.

Chalmers beamed: ‘I can’t believe it. I had Covid last week. I’m so proud to put Guernsey on the map.’

Alastair Chalmers won bronze in the men’s 400m hurdles with a time of 49.97seconds 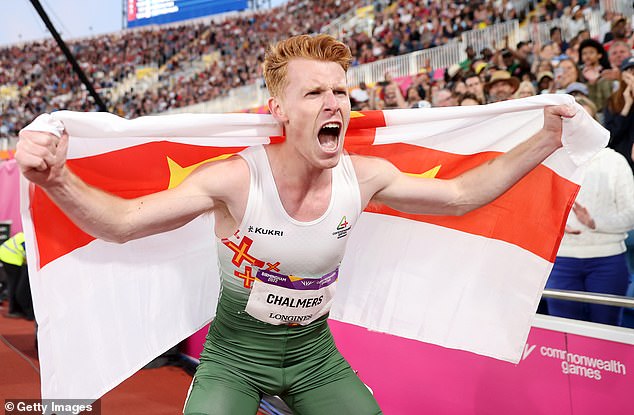 Twins Javier and Joaquin Bello will battle for beach volleyball bronze today after they were beaten in yesterday’s semi-final. The Madrid-born brothers lost to Canadian pair Sam Schachter and Daniel Dearing, but will face Rwanda’s Olivier Ntagengwa and Venuste Gatsinzi this afternoon with a chance to win England’s first-ever medal in the sport.

Gemma Frizelle was in shock after winning gold for Wales in the rhythmic gymnastics hoop final.

The 24-year-old achieved her country’s best result in history in the event. ‘I am just in shock,’ said Frizelle. ‘I was just hoping to scrape a medal. To come out with gold is amazing.’