Alastair Stewart is stepping down as an ITV newsreader after a 40-year career following ‘errors of judgement in social media use’.

Stewart, who was Britain’s longest-serving male newsreader, described his behaviour on social media as a ‘misjudgement which I regret’, but said it has been a ‘privilege’ to work at ITV.

His decision to step down comes after a black Twitter user claimed he ‘called him an angry ape’ three weeks ago. Martin Shapland later branded Stewart a ‘disgrace’.

ITV News has not confirmed whether the incident is behind him leaving his role, or if the veteran presenter was sacked or has resigned.

Alastair Stewart declined to comment at his home in Alresford, Hants, today. 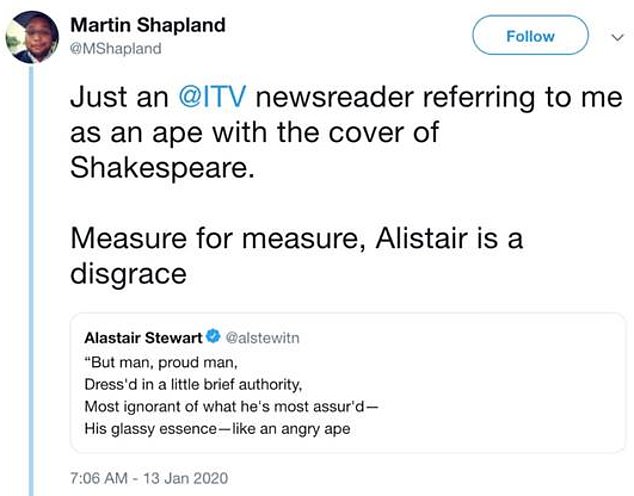 Stewart’s decision to step down comes after a black Twitter user claimed he ‘called him an angry ape’ three weeks ago. Martin Shapland later branded Stewart a ‘disgrace’ 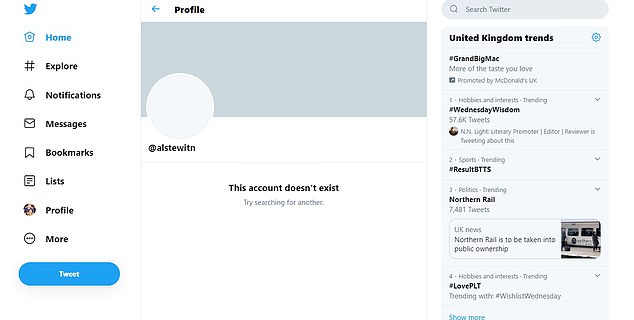 In a Twitter row Mr Stewart decided to quote a short passage from Measure by Measure by William Shakeaspeare.

The play was written in either 1603 or 1604 and is a dark comedy about a judge, Angelo, who leads the government in Vienna while the Duke is away.

The specific part Mr Stewart tweeted is a short speech by a character called Isabella, who has come to plead with Angelo for her brother’s life after he is sentenced to die.

Angelo refuses her request, and in response she says:  ‘But man, proud man,

‘Dress’d in a little brief authority,

‘Most ignorant of what he’s most assur’d—

‘His glassy essence—like an angry ape

‘As makes the angels weep; who, with our spleens,

‘Would all themselves laugh mortal’

Stewart was the longest-serving male newsreader after joining Southern Television in 1976 then ITN in 1980.

Michael Jermey, director of news and current affairs at ITV, said in a statement: ‘Alastair has been a long-standing, familiar figure to viewers of ITV News, both reporting and presenting with distinction. We wish him the very best for the future.’

The multiple-award winning presenter and journalist became embroiled in a debate on Twitter with Martin Shapland just three weeks ago.

The duo appear to be debating the relationship between the Crown and taxpayers funds when Mr Stewart says: This is you (sic) last chance.

‘As a student of history you should know the basis of the financial relationship between the Crown and the tax-payer.

‘It was sealed with the Civil List which was subsequently replaced by the Sovereign Grant & finessed by the John Major tax deal’.

Another user says they love it when people are so ‘misinformed’

Then Mr Stewart quotes a speech from Shakespeare play Measure for Measure, which includes the words ‘angry ape’. 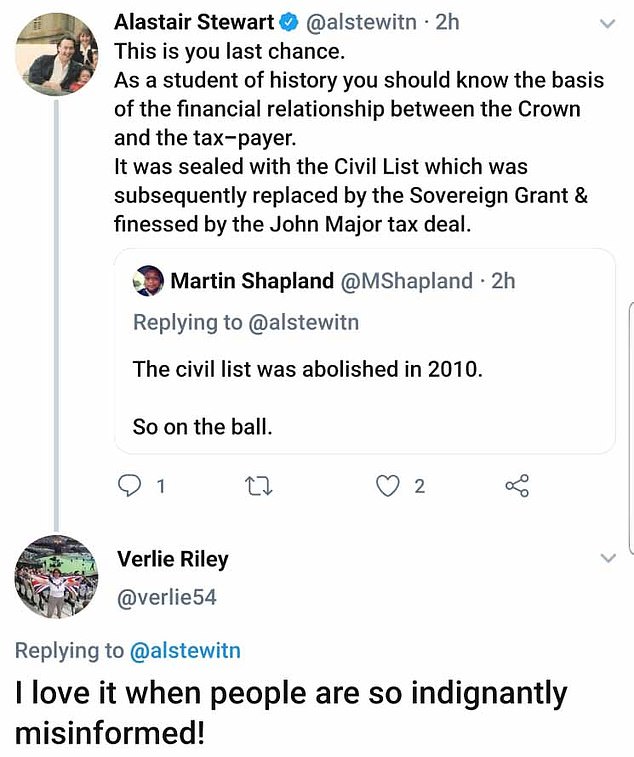 Mr Stewart and Mr Shapland are debating the financial relationship between the Crown and the taxpayer. In response another social media user says ‘I love it when people are so indignantly misinformed 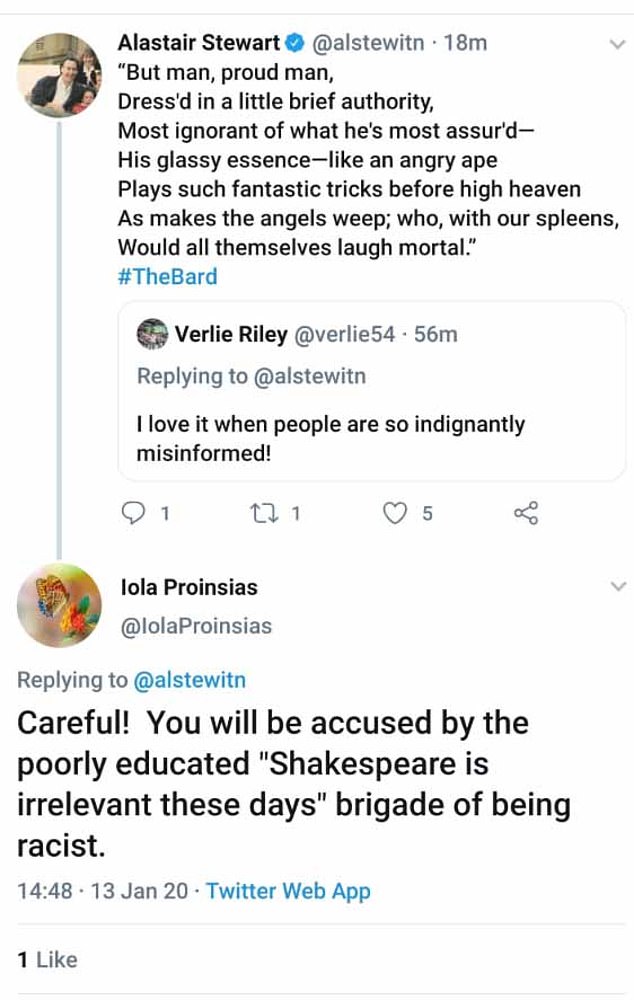 Mr Stewart responds by quoting Shakespeare. Mr Shepland claims Alastair Stewart is referring to him as an ‘angry ape’ 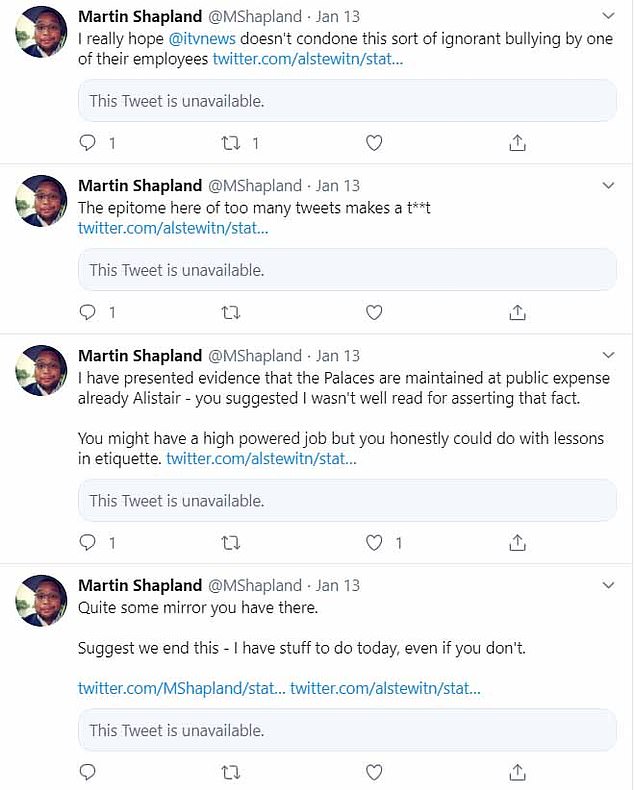 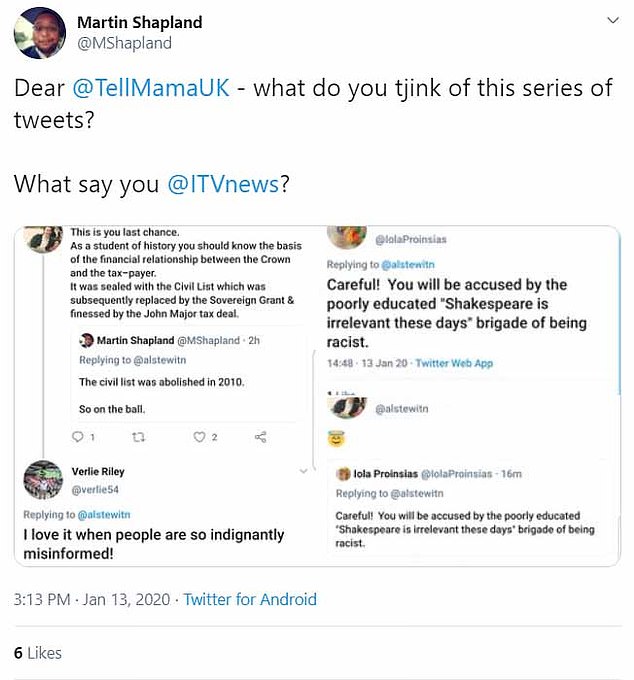 Mr Shapland responds saying: ‘Just an ITV newsreader referring to me as an ape with the cover of Shakespeare. Measure for Measure, Alistair is a disgrace.’

In later tweets he describes Mr Stewart’s behaviour as ‘ignorant bullying’ and suggests he should receive some ‘lessons in etiquette’.

ITN’s chief executive Anna Mallett added: ‘We would like to recognise Alastair’s contribution as one of the UK’s foremost journalists and TV presenters and to thank him for his commitment to delivering high-quality broadcast news over many years.’

The former newsreader hit headlines in May last year when he objected to retrospective plans to expand the number of products on sale at Long Barn – a family-run home and garden store in Alresford, Hampshire, despite living almost five miles away in upmarket Bramdean.

And in 2003, the father-of-four crashing his Mercedes into a hedge while three times the drink-driving limit.

He was fined £3,000 and agreed to go on a rehabilitation course for disqualified drivers.

He was also dropped from presenting Police Camera Action!, which he started on in 1994. 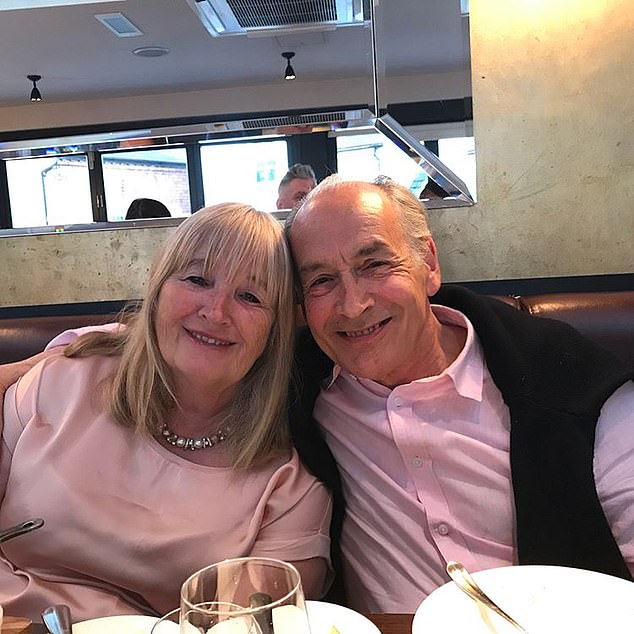 Mr Stewart, who was born in Gosport, Hampshire, attended the state Madras College in Fife, Scotland, before moving to the independent Salesian College in Hampshire, then St Augustine’s Abbey School in Ramsgate, Kent.

He studied economics and politics at University of Bristol before going on to work for the National Union Of Students between 1974 and 1976.

His very first journalism jobs came with ITV’s south of England company Southern Television in Southampton in 1976 as a reporter and industrial correspondent.

In 1980 he joined ITN and went on to work as a presenter and reporter with the organisation’s Channel 4 News.

In 1989 he moved to ITV’s News At Ten where he became the lead presenter on the flagship show’s major news bulletins.

Until his departure from the broadcaster Stewart’s portfolio of work saw him move between the lunchtime, evening and 10pm shows while presenting special programmes.

In 2003 he worked as a presenter for ITV’s Iraq War coverage and also became a regular face for the broadcaster’s national election coverage in 2005.

It was announced in August 2009 that Alistair would be the main co-presenter of the ITV Evening News.

A fan of rock music, Stewart won Celebrity Mastermind in December 2009 with The Rolling Stones as his specialist subject.

He briefly appeared in the West End in a 2015 production An Evening With Lucian Freud by Laura-Jane Foley.

He played a hapless interviewer appearing on video alongside Cressida Bonas, Russell Grant and Maureen Lipman.

Stewart famously kept his cool in August 2017 as a toddler took over his live news broadcast.

He was conducting a segment about milk allergies on the ITV Lunchtime News with a mother and her young son and daughter, when the little girl got up and ran around the desk.

She then climbed up on the desk in front of Stewart, often creeping into his shot, for the remainder of the piece.

As the toddler got up to run around, Stewart said that she ‘will do whatever she chooses to do for the next couple of minutes’, before continuing with the interview.

Having stifled laughter while continuing the broadcast, the veteran newscaster joked at the end of the segment: ‘Mary Nightingale, I think, will have a more peaceful time at 6.30.

‘From all of us, a very good afternoon to you.’