Scott Morrison’s latest election pitch to have first home buyers raid their superannuation to buy property has been slammed by Labor as irresponsible.

‘I’m going for a second term because I’m just warming up,’ he said.

Under the scheme homebuyers will be able to use up to $50,000, or a ‘responsible portion’, of their superannuation to invest in their first home. 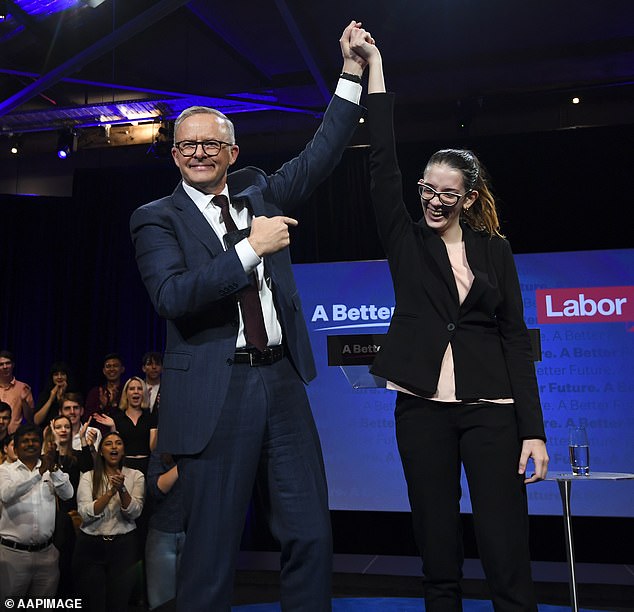 Just a week out from the federal election, Labor is arguing the move will only make the housing market more expensive.

‘You shouldn’t have to raid your super to buy your own home, and you won’t under Labor,’ Labor’s housing spokesman, Jason Clare, said.

He said the increased competition from buyers dipping into their super would only drive up house prices further.

‘This would be like adding kerosene to a fire… super will supercharge the property prices.’

He said rather than simply throwing more money into the market, a different approach was needed to bring prices down.

‘We’ve got to make it easier for Aussies to buy their own home,’ he said. 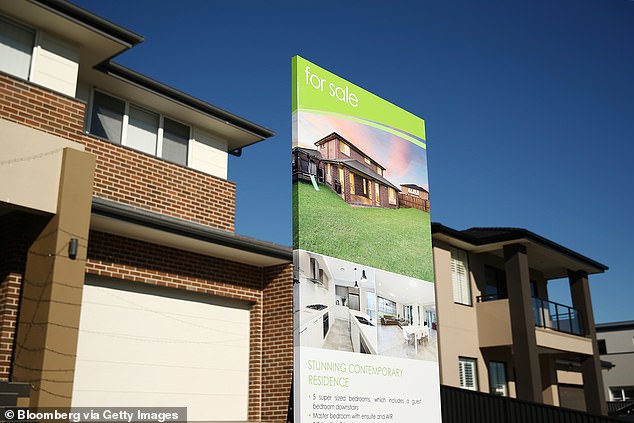 Under the Coalition’s plan $50,000 can be withdrawn from superannuation to put towards a home but critics said this would only drive up prices (stock image)

Labor leader Anthony Albanese speaking at his own campaign rally in Brisbane on Sunday, said soaring house prices weren’t the only issue affecting younger voters as he took aim at the Coalition’s inaction on climate change.

‘What does it take to give some of the numpties in this Government a wake-up call to tell that climate change is here right now?’ Mr Albanese told the crowd.

‘Young Australians perhaps know better than any of us we must get serious about acting on climate change.’

While both Labor and the Coalition have committed to reach net zero emissions by 2050, Labor’s short term goal is more ambitious.

Mr Albanese also took aim at Mr Morrison’s admission he can be a ‘bit of a bulldozer’ when considering alternate views as he pitched he would make a change if elected.

He added that a vote for him would be a ‘vote for change’ on climate action, Indigenous recognition and ‘unity over fear and division’. 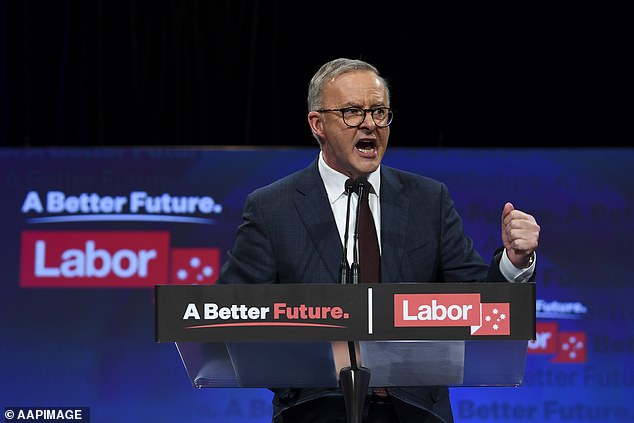 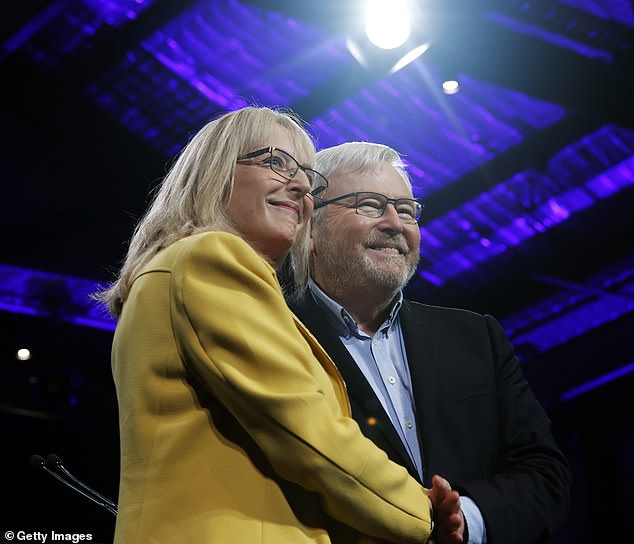 ‘The Liberals hate the superannuation system, they object to working Australians having wealth in retirement independent of the government,’ Mr Keating said.

The Keating government’s economic reforms in the 1980s and 1990s created many financial systems which are in place in Australia including modern superannuation.

‘The Libs believe ordinary bods should be happy with the age pension. Let them know their place.’ he said.

He urged Australians to vote out the ‘intellectually corrupt’ LNP and an ‘unprincipled’ Scott Morrison.

‘The FSC recognises there is a correlation between renting in retirement and poverty amongst older Australians, but Australians should not have to choose between a home and their retirement savings,’ CEO Blake Briggs said.

‘The government’s own majority report into housing affordability and supply in Australia concluded that superannuation should only ever be used for housing if there were commensurate measures to increase supply.’ 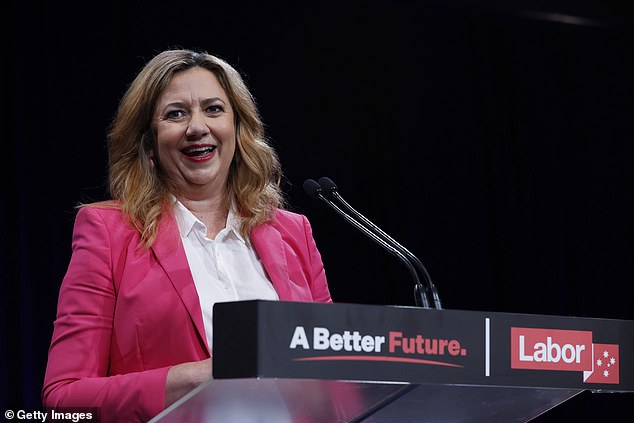 ‘The government’s supply measure only extends downsizing to 1.3 million households, whilst potentially allowing approximately 5.3 million under 35-year-old Australians access their superann,ation to buy a first home,’ he said.

‘The government has an obligation to do more to boost supply, otherwise unleashing superannuation savings on the housing market risks driving prices higher still.’

But Prime Minister Scott Morrison argued in announcing the scheme that ensuring Australians can buy a first home is the ‘best thing’ his government could do to ensure financial security in retirement.

‘We want to further help Australians get past what is the biggest hurdle on their path to home ownership [and] that is the difficulty of saving for a deposit. And being able to use their own money to do it,’ Mr Morrison said.

Scott Morrison’s last-ditch policy: Use your super to buy a house

First home buyers will be able to dip into their superannuation and use up to 40 per cent of their savings to buy a new house.

Prime Minister Scott Morrison announced on Sunday that a ‘responsible portion’, or up to $50,000, could be withdrawn from the account.

The money can be withdrawn to be used on exisiting or new homes.

If the house is sold, the money taken out to invest in the home will be returned into the superannuation account, including a share of any capital gain.

Mr Morrison claimed the scheme would slash the average time it took to save for a home by three years. 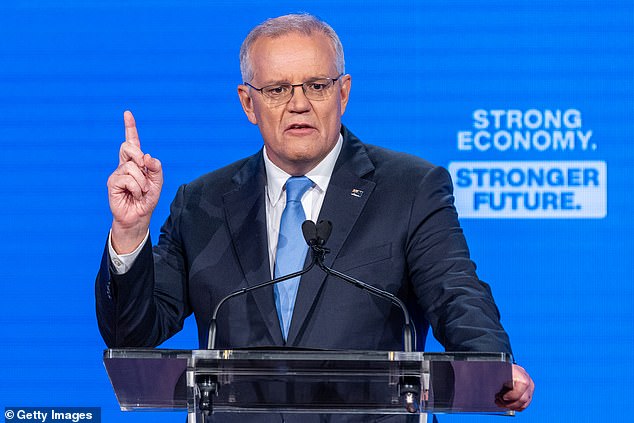 ‘The maximum amount able to be invested under this plan is the lower of $50,000 or 40 per cent of your total superannuation balance.

The money can be withdrawn from the superannuation account and used to buy an existing or new home.

If the house is sold, the money taken out to invest in the home will be returned into the superannuation account, including a share of any capital gain.

Mr Morrison claimed the scheme would slash the average time it took to save for a home by three years. 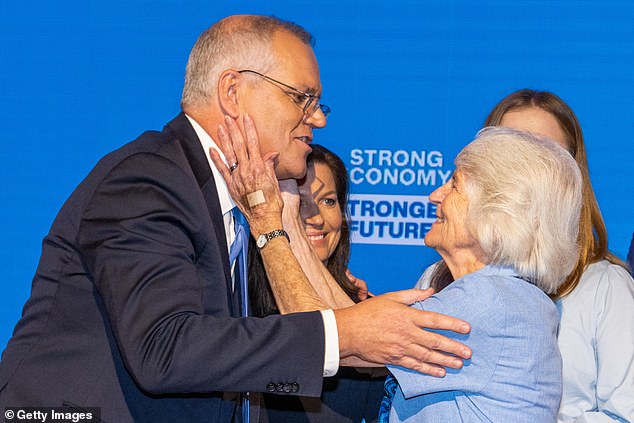 He said the plan would make it easier for homebuyers to own their first house and reduce the number of renters.

‘Our plan makes it easier for first home buyers to save for a deposit, reducing the time people need to pay rent, and also means a smaller mortgage with less debt and smaller repayments,’ he said.

‘It’s a plan that gets the balance right – it utilises money that’s currently locked away to transform a family’s life, with the money then responsibly returned to the super fund at the time of home’s sale.’

Under the coalition’s expanded housing policy, up to 1.3 million empty nesters and pensioners will also be able to access incentives to downsize their house, in a plan to help more families get a home.

Australians over the age of 55 will be able to downsize their property and invest up to $300,000, per person, in their superannuation fund outside of the existing contribution caps, from the proceeds of a sale. 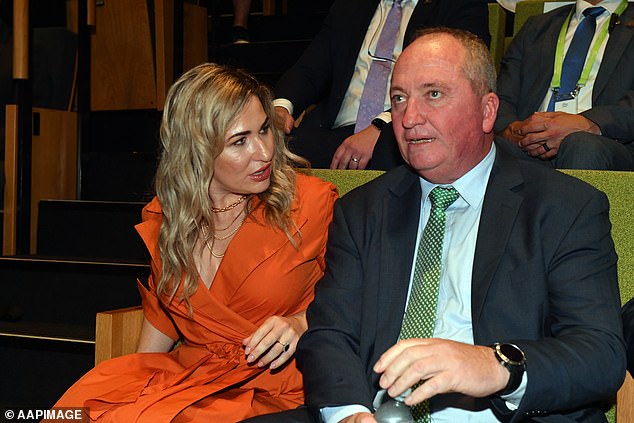 Pensioners who downsize their home will also have greater flexibility as the proceeds of the sale of the property will be exempt from the assets test for longer.

They will have two years to structure their assets after the sale of their home without hurting their pension.

Labor senator Murray Watt said his party would always back a good idea.

‘We will support this one. We think this is a good idea worth taking on,’ he told Sky News.

‘But the realty is that just one announcement from this government after nearly a decade in office is not going to fix the housing crisis we see in Australia.’

Mr Morrison also used the election campaign launch to claim his government ‘saved the country’ during the Covid pandemic.

‘We gave our fellow Australians that assurance in those very difficult times that tomorrow would be OK,’ he said at the Brisbane Convention Centre on Sunday. 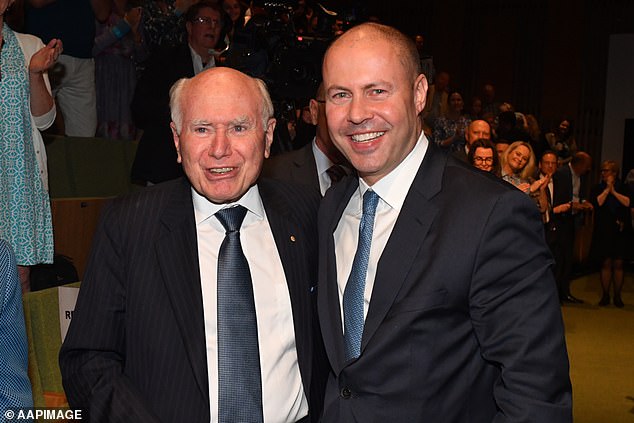 ‘So they could say the same thing to their children, to their employees, and I’m quite sure indeed to themselves.

‘As a leader, this was a time for strength, it was a time for pushing through. I had one focus, as your prime minister, save the country. And we did.’

Mr Morrison defended his record as leader and admitted his Coalition government faced a challenging couple of years.

‘It’s been one of the most challenging times we have ever known,’ he said.

‘But I’m here to tell you today that despite what we have faced, we have remained true to the promise of Australia. And Australia has prevailed.

‘We want to further help Australians get past what is the biggest hurdle on their path to home ownership [and] that is the difficulty of saving for a deposit. And being able to use their own money to do it.’