A new treatment for slipped discs involves injecting a blob of gel containing alcohol into the spine. Marine contractor and father-of-two Robert Parke, 49, from Dumfries, was one of the first people in the UK to have it done.

Robert Parke, 49, has suffered crippling back pain since his teens

When I was in my early teens, I began suffering occasional bouts of lower back pain. My GP insisted it was growing pains and gave me paracetamol.

The pain was intermittent for years — I may have it for a week or two and then not for several months, so I just kept relying on painkillers to manage it.

But when I started to feel back pain when driving at 21, I decided to see a chiropractor after a friend suggested it might help.

He said the symptoms sounded like I had a slipped disc, where the soft, gel-like substance inside a disc in the spine oozes out; it was pressing against my sciatic nerve [which runs from the spine to the lower legs], causing the pain.

The chiropractic treatment provided relief for a few months and then I’d have to go back for another one.

I also tried physiotherapy, which helped strengthen muscles around my back, as well as acupuncture; both gave me temporary relief for three to six months at a time.

I carried on like this — taking tablets and having regular treatment — but it gradually got so bad that some mornings I was in so much pain and so stiff I could not even bend to put my socks on and I’d have to ask my wife, Tracy, to do it for me. Once I got moving I would start to loosen up and the pain and stiffness would subside.

By now I was working as a marine contractor, which involves inspecting pipework and machinery, so plenty of bending and crawling under equipment — all of which put strain on my back.

I was beginning to wonder if I would be able to carry on working and began to research slipped discs on the internet. Last year I came across a new treatment called Discogel — where they put an alcohol-filled blob of gel into the damaged disc in the spine.

The idea is that water escaping from a damaged disc is a major source of pain as it aggravates nerves and causes inflammation. But I read that alcohol absorbs water easily, taking pressure off nerves and soothing the pain.

One of the big attractions for me was that the treatment did not involve major surgery, so I could be back at work within days rather than weeks. 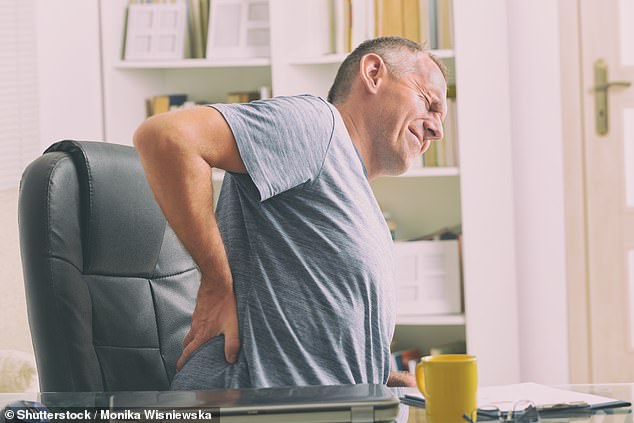 Mr Parke said that  after more than 30 years of suffering with back pain, the new treatment has given him his life back (file photo)

I found a private clinic in London that was offering the treatment and had it done in July 2018 under a local anaesthetic. The procedure took less than an hour and afterwards I felt no pain — I didn’t even need to take paracetamol — and was up and walking the same day. I had some pain in my right leg, which meant for the first few weeks I could not sleep on my right side, but this eventually wore off.

However, I had instant relief from the back pain. Now I can bend and squat more easily without seizing up, put my own socks on and I have not taken a single painkiller since.

I go for regular long walks, swim several times a week and have taken up DIY around the home. After more than 30 years of suffering, this has given me back my life.

Dan Plev is a consultant neurosurgeon at The London Clinic. He says:

Slipped discs affect around one in 20 people at some point in their lives. They can be triggered by bending awkwardly, lifting heavy items, sitting for long periods or being severely overweight.

The spine is made up of 24 individual bones called vertebrae, each stacked on top of each other.

In between each one is a circular pad of tissue — or disc. These discs have a tough outer case which surrounds a gel-like substance, called nucleus pulposus, and water to keep it moist and flexible.

Problems arise when the outer casing gets damaged.

This can occur through injury, such as a fall, causing sudden, intense pain, but is more commonly due to the ageing process as the older we get the less flexible discs become and the more likely they are to split.

Once they are damaged, the soft gel and water inside put pressure on nerves in the spine — usually the sciatic nerve which runs from the base of the spine to the knee, causing shooting pains down the leg. It’s a gradual process so fluid can still be leaking years later.

Current treatment involves a combination of physiotherapy to mobilise the spine and medication to relieve the pain.

Steroid jabs are often used to dampen inflammation, but the effects can wear off after a few months and the pain returns.

In around 80 per cent of cases, a slipped disc will eventually shrink back away from the nerve over a period of several months as the water naturally dries up, easing the pain.

But severe pain may require surgery to either release the compressed nerve or remove part of the disc so it stops pressing on the nerve. But this is a fairly major operation with a six-week recovery period.

The Discogel procedure takes less than an hour and aims to avoid major surgery and speed up the natural healing process by shortening the time it takes for a compressed disc to shrink.

It can do this because ethanol — the alcohol it contains — is hygroscopic, which means it absorbs water easily, soaking up the fluid that’s leaked from the disc, taking pressure off nerves and soothing the pain.

First, the patient has an MRI scan to assess the scale of the damage. Then they lie on their front and are given a local anaesthetic in the back.

The semi-solid liquid gel is slowly injected, a very small amount at a time, through a long needle into the damaged disc. I check on an X-ray screen to see exactly where the gel is travelling.

As well as alcohol, the gel contains cellulose — a fibrous material made from plants which is firm enough to provide structural support to reduce the risk of the disc collapsing any further.

Once the gel is in, the needle is withdrawn and the patient lies down for four hours to allow the gel to settle in place.

A 2018 study, published in the journal Pain Physician, looked at 33 patients with slipped discs who underwent Discogel treatment and found they had complete pain relief for at least a year after the procedure.

I have performed the Discogel procedure on 15 patients so far and only one saw no improvement in back pain. I believe it’s a good alternative to major surgery for many patients whose slipped discs do not gradually improve on their own with gentle exercise and over-the-counter painkillers.

The Discogel treatment is only available privately and costs around £5,000