Aldi’s VERY unique twist on an everyday kitchen buy sends thousands flocking to try it for themselves: ‘This is magic’

Home cooks are raving about Aldi’s latest ‘magic’ Special Buys item: a chopping board which helps defrost your food evenly.

The ‘game changing’ tool appeared in the July 20 Special Buys catalogue, alongside other kitchen appliances.

But it took a few weeks for people to realise how good the Crofton chopping board is – and now, almost two weeks later, people are searching for them.

Home cooks are raving about Aldi’s latest ‘magic’ Special Buys item; a chopping board which helps defrost your food evenly

The $16.99 chopping board has an aluminum plate which the retailer says assist with evenly defrosting food.

It also has a drip line which catches the moisture and  ‘reduces mess as it thaws’.

The backside of the chopping board has a knife sharpener and garlic grater – which pleased women in the Aldi Mums group.

‘I had a bit of a panic after the fresh whole turkey I ordered for Saturday’s Xmas (sic) in July was delivered frozen with the advice of allowing a minimum of two full days to defrost fully before cooking,’ one woman wrote.

Before adding: ‘Cue minor panic and the defrost board – result – a whole 6kg turkey defrosted in one afternoon, approx. five hours – turned each hour – this is a game changer.’

While another woman said she defrosted two slices of bread in five minutes using the board. 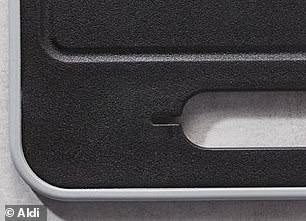 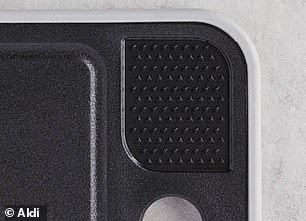 While others described the board as ‘magic’ and said they managed to find one in store after seeing ‘the hype’.

‘The FOMO was real for me this time, I had to race in and get one and it is actually amazing,’ another wrote.

The chopping boards are so effective because aluminum is a food conductor of ambient heat – which means things defrost quickly and safely without the need for power.