Saturday Night Live kicked off their 45th season taking a funny and poignant aim at the whistleblower scandal in the premier cold open sketch.

Alec Baldwin surprised audiences by reprising his role as President Donald Trump making a call from the Oval Office to Rudy Giulliani, played by Kate McKinnon, revealing he was being impeached.

SNL poked fun at the President straight away with Baldwin saying the impeachment was ‘ the greatest presidential harassment of all time — I’m like the president of harassment.’ 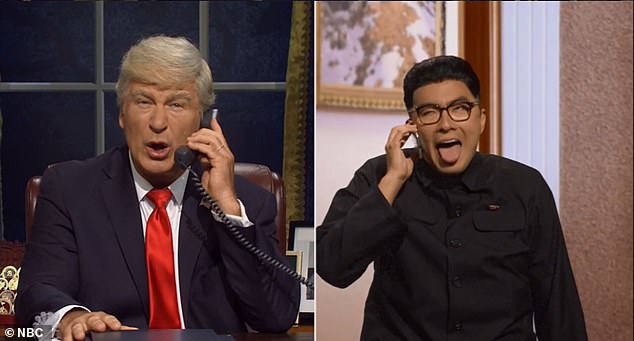 Kim Jong-Un, played by SNL newcomer Bowen Yang, makes an appearance as the next person on Trump-Baldwin’s call list 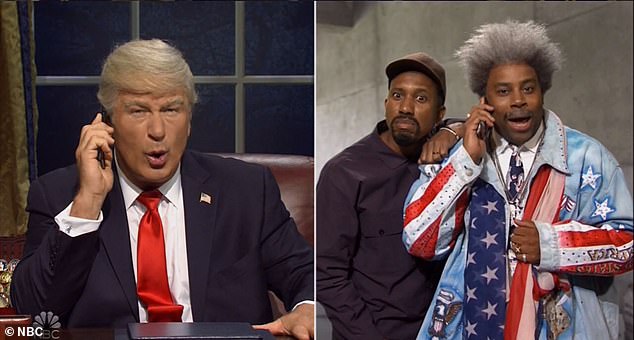 Baldwin-Trump (left) decides he needs to call his ‘urbans’, Chris Redd as Kanye West (right) and Kenan Thompson as Don King (far right), to see if they have any ideas 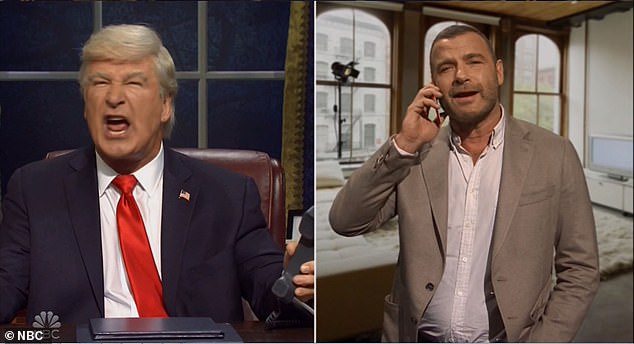 McKinnon-Giulliani urged the President to loosen up, telling the Baldwin-Trump that no one would be able to work out their ties with Ukraine – ‘or how we tried to cover up those side dealings. Or how we plan to cover up the cover-up.’

Interrupting the call was Aidy Bryant playing William Barr assuring Baldwin-Trump not to worry because he assigned his ‘top guy’ on the job, but when a three way phone call happened it was just McKinnon-Giulliani again.

Baldwin-Trump decided to call ‘the perfect stooge’ – non other than his Vice President Mike Pence played by Beck Bennet.

Bennet-Pence wants nothing to do with the scandal, saying: ‘But you’re the one who broke the law!’

‘Don’t drag me into your mess.’

The phone call switches again to bring in his sons Don Jr. played by Mikey Day and Eric played by Alex Moffat.

‘I can’t believe the lame-stream media is focused on you and not the corruption of Joe Biden’s so,’ Day as Don Jr. says in a bolstered voice. 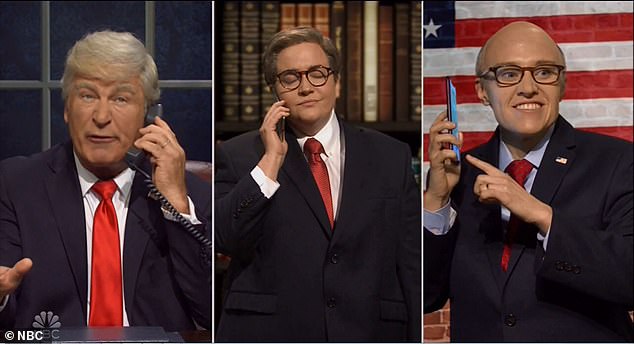 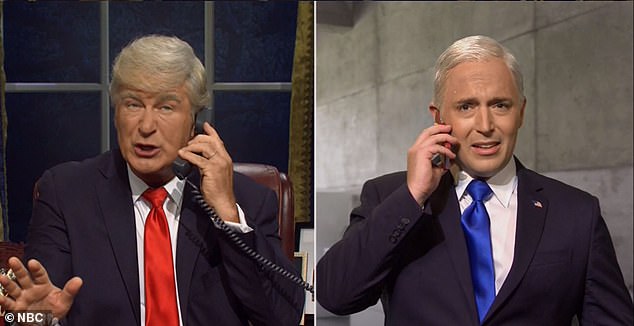 ‘Did you take care of that thing in Russia?’

‘The treason!’, Moffat-Eric shouts unable to contain himself.

Kim Jong-Un, played by SNL newcomer Bowen Yang, makes an appearance as the next person on Trump-Baldwin’s call list.

‘Do you have a big ocean in your country? OK, send whistleblower to the bottom of there Trump-Baldwin,’ was Yang- Jong Un’s solution.

Next, Baldwin-Trump decides he needs to check in on his ‘urbans’.

‘I need my urbans! ho do you need out of jail this time? that little girl terikyi 69?,’ he said.

Naturally, he calls Chris Redd who is reprising his role as Kanye West. 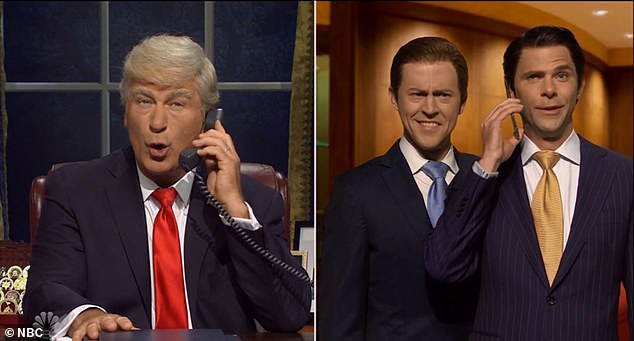 Unfortunately, Redd-Kanye and the President can’t be ‘fam’ anymore because ‘this whole impeachment thing is hurting our brand,’ Kenan Thompson says as Don King.

On his final whits, Baldwin-Trump makes a final call that turns out to be fictional character Ray Donovan played by Liev Schreiber, who Baldwin-Trump believes  ‘takes care of stuff.’

‘I told you Mr. president, Ray Donovan is a fictional character.’

Baldwin-Trump then asks to see Schreiber can connect him to movie character John Wick.

‘What about Liam Neeson,’ Baldwin-Trump asks.