Retreat from rates scare: There is a fashionable view that inflation may be at its peak – but Putin is the elephant in the room, says ALEX BRUMMER

Housing and the consumer spending that goes with it is a huge driver of the economy.

Everyone with a mortgage or seeking to join the home-owning democracy has to be concerned about the tantrum in the gilts market.

As most Britons have moved from standard variable rate and tracker mortgages to fixed rates since the financial crisis, it was thought they were buying stability. 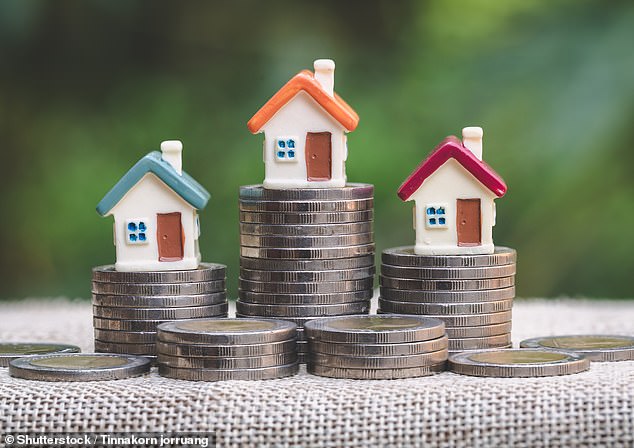 Rising rates: Everyone with a mortgage or seeking to join the home-owning democracy has to be concerned about the tantrum in the gilts market

Yet the speed with which hundreds of deals were removed from the market last week, leaving homeowners facing a daunting cliff edge, is frightening.

No one is going to be over-excited at the return of two-year fixes at the likes of NatWest, Virgin, and Nationwide at 5.75 percent.

There are questions as to whether lenders are over-egging things and taking an opportunity to strengthen interest rate margins and earnings.

Indicators suggest that bond markets have been outrunning central banks and that official interest rates may not rise as high or fast as forecast.

Elsewhere, US Treasury yields on the five-year, ten-year, and 30-year bonds are in retreat.

Strategists at Deutsche Bank and City Index among others speculate that central banks may be pivoting and peak rates will be less than previously thought. This view has permeated foreign exchanges where one-sided dollar positions – pushing the greenback ever upwards – are unwinding.

There is a fashionable view that inflation in the West may well be at, or near, its peak. The post-Covid-19 supply side bottlenecks have been relieved.

Oil prices have retreated, although Saudi Arabia and Russia are talking about reducing supplies.

And Europe is adapting to liquefied natural gas (LNG) faster than envisaged. The elephant in the room is Vladimir Putin and threats of the military, even nuclear, escalation in Ukraine, under which circumstances no one will be worrying about mortgage fixes.

Andrew Bailey and the Bank of England have been criticized, not least in this space, for not raising rates by 0.75 percent last month in the face of Liz Truss’s costly energy bail-out and the tumbling pound.

Maybe the Office for Budget Responsibility’s take on the fiscal event when released this month will end gilt markets jitters.

Robert Stheeman, who runs the UK’s Debt Management Office, is calm, telling Reuters that even though there has been high volatility in gilts, not dissimilar to the start of the pandemic, dealers have managed to keep trading.

He is confident that the market could absorb the extra debt, which may need to be issued following Kwasi Kwarteng’s tax reduction initiative.

Legal & General shares bounced 5.9 percent in the latest trading after the insurance and pensions behemoth reassured markets that it had the necessary cash to withstand the shock to the liability-driven investments (LDIs) which prompted the Bank of England to lead a temporary rescue.

Of the £65billion potential spent (up to £5billion a day), it turns out that £3.66bn was spent over the first four days.

Pensioners will be relieved by L&G’s statement and the so far modest bail-out.

None of this should detract from regulatory failure by the Bank and the Pensions Regulator which allowed the use of precarious LDIs to balloon in a market where safety ought to be the first order.

Talk of preventing cascading insolvencies could only be frightening. Since the great financial crisis of 2007-09, Financial Stability reports from official bodies have become all the rage.

The latest document released by the International Monetary Fund warns of the dangers posed by the $41 trillion of ‘open-ended’ investment funds, many of which allow daily redemptions.

The IMF makes proposals for rendering this asset class safer. But as we have learned from the LVI scare, regulators are hopelessly slow to protect investors.

Amid gloom about UKplc, our creative industries are doing fine. A competitive pound together with great production facilities is attracting ever more filmmakers to Britain.

Hollywood studios are expected to spend an extra £ 3 billion in the coming months in addition to £5.6billion earned last year. That must be worth a modest cheer.