Alex Dombrandt scored two tries as Harlequins made it two wins from two in the Heineken Champions Cup with a 43-17 victory over a depleted, yet gutsy Cardiff Rugby.

The scoreline at the Twickenham Stoop does not tell the full story, however, as the Welsh region produced a spirited performance that caused the Premiership champions to sweat for long periods of what was an absorbing encounter.

They were level at 17-17 at half-time, with youngsters Cameron Winnett and Theo Cabango both scoring, but Quins’ superior bench helped them eventually pull clear in the final 20 minutes.

Cardiff were still without 42 players due to Covid-19 isolation and injury and were forced into giving Winnett a debut at full-back.

He got his side, and his big day, off to the perfect start when he dived over in the right-hand corner after being picked out by Dan Fish in the fifth minute, with Tomos Williams converting from out wide.

It did not take long for Harlequins to hit back, however, as the ball quickly went through the hands of Marcus Smith and Jack Kenningham before Danny Care scampered through a gap to score.

Smith converted to level at 7-7 and the Blue and Blacks were also reduced to 14 men as Josh Adams was sin-binned for a dangerous tip-tackle on Tyrone Green in the build-up. 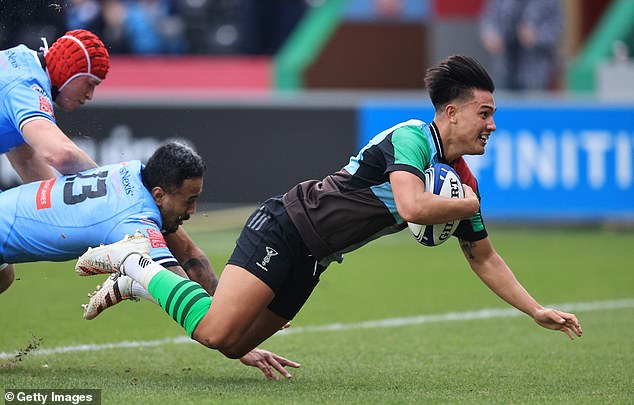 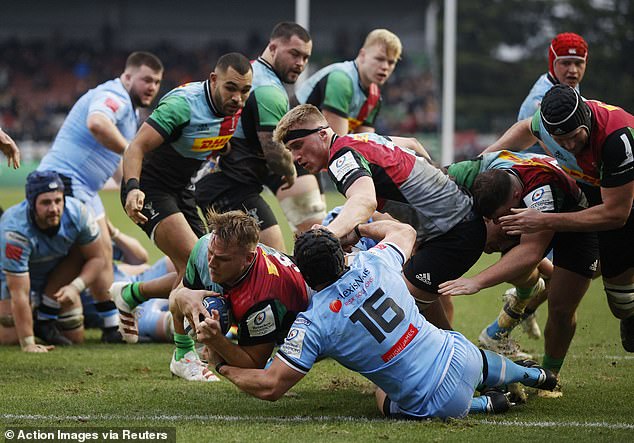 The depleted visitors were soon ahead again when James Botham plunged over, but this was quickly cancelled out by a brilliant score by Smith.

The England fly-half broke down the middle from 70 metres out and passed to Dombrandt before gathering the return ball to go clear. He converted for good measure.

Smith then slotted a penalty in front of the posts, but the match was level again when a turnover led to Seb Davies unleashing 19-year-old Cabango down the left wing for Cardiff’s third try.

There was still nothing to separate the teams at half-time and it just about remained that way nine minutes after the restart when Adams was held up over the line by some desperate Quins defence. 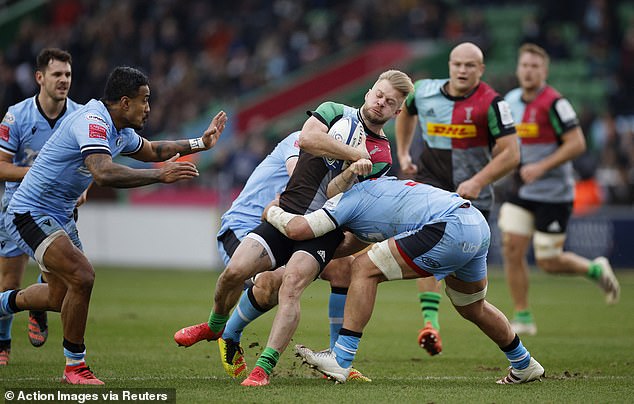 The hosts struggled to get out of their own half for some time, but they eventually hit the front for a second time after 58 minutes when Dombrandt was able to power himself over from Care’s pass.

Quins then sealed the try bonus point when a pinpoint chip to the left wing by Smith was gathered by Joe Marchant, who sped over to score in the corner, with Smith’s conversion opening up a 14-point gap.

Harlequins continued to pull away when Dombrandt grabbed his second, off a driving maul, before the scoring was rounded off by Andre Esterhuizen crashing over near the posts with two minutes to go.