Alex James sets sail to see the Northern Lights and decides…Norway? I could live here forever!

The Scandinavians were the first to fall in love with Britpop – way before anyone in the UK, so, as the bass player with Britpop band Blur, I’ve spent a lot of time in Nordic countries over the years.

I’ve had spectacular nights on the razzle-dazzle in Stockholm, Helsinki and Oslo, and the countryside – which I stumbled upon accidentally when playing at summer festivals – is like nowhere else on Earth.

But I’ve never seen the Northern Lights and I love deep winter, so I went on a 12-night, no-fly cruise from Southampton to Norway.

Tasting the air: Alex on deck of the Aurora, which goes from Southampton to Norway to see the Northern Lights

Cruising is like being on tour with a band. You turn up somewhere, take your pick of the best things on offer, then push off somewhere else.

When we stopped in Tromso, which looked like a cool Advent calendar with all its doors open.

Nordic chic is where it’s at right now and they really understand lighting, probably because it’s dark for such long periods. The sun sets in Tromso on November 21 and it doesn’t return until February.

By dinner it was snowing hard. Going somewhere that is colder than your deep freeze is not everyone’s idea of fun but one thing is for certain: food never tastes quite so good as it does when you’ve just been outside in a blizzard.

It’s a unique cuisine and they eat local, which makes a lot of sense in the Arctic. Transport is either expensive or impossible and it’s hard to grow anything in the winter months so they are big on preserved foods, many unusual. 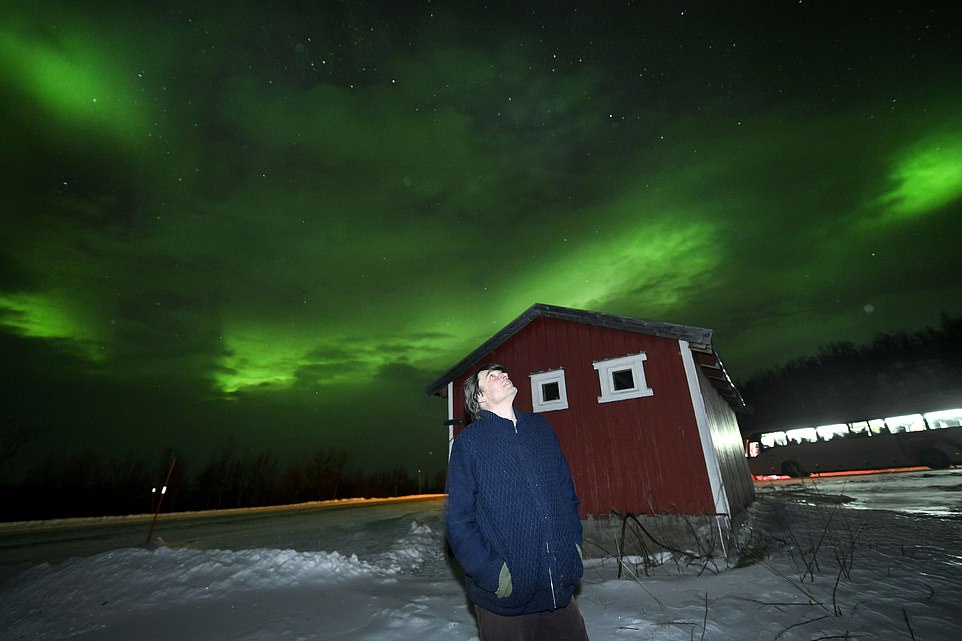 Magical display: Alex finally makes his dream come true as he watches the Northern Lights for the first time

Reindeer is as common as lamb in the UK – rich and livery tasting, but over the week I was served everything from the game bird ptarmigan to local parmesan. When the waiter told us the salmon was frozen, my heart sank a little before he explained that freezing is the natural way of preserving food up here and it was the best salmon I’ve ever had.

But that paled next to the fermented cod. It bore about as much resemblance to fish as milk does to cheese – a different class of mouthful.

It is traditionally eaten with aquavit – pure, weapons-grade alcohol, straight off the still. And a wonderful thing an ice-cold glass of aquavit is, too, but for all that, it’s the vegetables that steal the show.

Maybe because they are such a precious resource, they are cooked with love and attention to detail I’ve not seen anywhere else. Who thought swede could be delicious?

And I’ve never felt so hungry, perhaps because you get a lot of exercise in the Arctic. 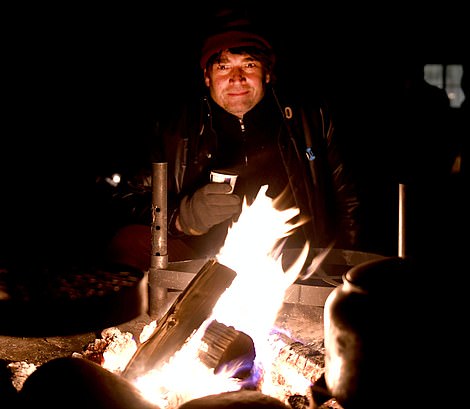 Even standing outside counts. You can taste the air. It’s also the world’s best hangover cure, which was fortunate because I’d stayed up late the night before dancing myself stupid with friends I’d made in The Crow’s Nest, one of the bars on board.

Any kind of pampering is enhanced by extreme conditions and I took advantage of the on-board spa. The sauna had a vast window and as we travelled further north, I spent a lot of time in there watching endless pristine frozen landscapes roll by.

After two days at sea we arrived at Alta, another modern marvel of a metropolis and it was from there that I took a trip to the top of a dark, distant mountain to get the best view of the Northern Lights, the Aurora Borealis.

Candles lit the way to a wigwam with a roaring fire at its heart. Shortly after my second cup of hot chocolate the first stars began to appear.

Ten minutes later I was able to spot the Plough, and then the sky lit up green in a phantasmagorical display so spectacular it produced gasps and cries. The Milky Way striped the sky from horizon to horizon, the veil of night, bottomlessly profound.

What has made the extreme north special for me is the feeling of scale it gives: the sense of being on an actual planet floating perfectly balanced in an unexplainable universe so vast and wonderful it makes you giddy.

That was the feeling I wanted and the reason I came to this great wilderness. And I’m very glad I did and I will definitely come back because after asking myself ‘Why would anyone want to live here?’ on the sailing out, I got a feeling I don’t get very often – that I could stay here for ever.

Even in these days of a shrinking world where things are more similar wherever we go, the far north remains another world altogether.

P&O Cruises (pocruises.com) has a 12-night cruise on Aurora from £999pp. Departing November 3, 2019, the price includes full-board and entertainment. Departing from and returning to Southampton, ports of call are Andalsnes, Tromso (overnight in port), Alta (overnight in port) and Stavanger.