Jurgen Klopp and Alex Oxlade-Chamberlain have not exchanged many cross words but the subject of the midfielder’s shooting used to exasperate Liverpool’s manager.

When Oxlade-Chamberlain arrived at Liverpool in August 2017, it took him a while to get out of the mentality he adopted at Arsenal. By his own admission, he was the one who wanted to help and assist others around him rather than look after himself.

During those early days, Klopp would watch the England international ping shots with unerring accuracy and power in sessions at Melwood but, come matchday, he would see a player who doubted his ability.

Arsene Wenger, his old manager, would understand Klopp’s observations. During a pre-season tour in Los Angeles in July 2016, Wenger had remarked in conversation with Sportsmail that Oxlade-Chamberlain “did not know how good he could be”, so Klopp made a decisive intervention.

Oxlade-Chamberlain told The Daily Telegraph earlier this year: ‘He always used to say to me: “What’s the difference between you and Mo (Salah)? Why does he score so many? I watch you both shoot in training and you’re just as good. It’s because Mo believes he can and you don’t. Simple”.’

The penny dropped with Oxlade-Chamberlain in a game against Manchester City in April 2018. It was no ordinary game, either, being the Champions League quarter-final first leg. As he powered towards goal, he unleashed a drive that was still gaining speed as it ripped into The Kop End net.

It was the second time within three months he had took a hammer to City. In a Premier League meeting that January, Oxlade-Chamberlain’s howitzer kick-started a fabulous contest that Liverpool eventually won 4-3. 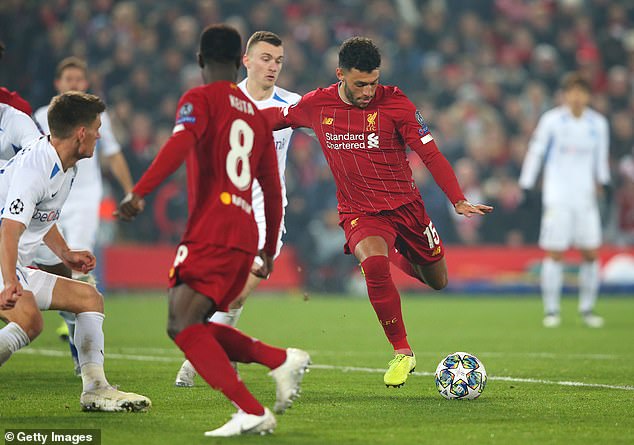 Watching the 26-year-old against Genk here, that story came to mind. Oxlade-Chamberlain scored another goal in front of The Kop, a crucial one to restore Liverpool’s advantage on scruffy night, but you wondered whether this was practice for a more significant contest on Sunday.

He has a habit of playing well against City. Those two matches at Anfield aside, he sparkled in the return leg of the quarter-final at the Etihad Stadium, while he was Man-of-the-Match for Arsenal in the 2017 FA Cup semi-final, setting up a goal for Nacho Monreal.

Perhaps this, then, was Klopp giving Oxlade-Chamberlain an audition for the biggest game of the campaign. If it was, he did his chances no harm. Liverpool’s No 15 has his eye in at the minute and the move he finished early in the second half was his fourth goal in the last three weeks.

Aside from scoring, Oxlade-Chamberlain has been influencing matches. He made a difference when he came on at Old Trafford, when Liverpool secured a crucial 1-1 draw, while his cameo at Villa Park last Saturday was crucial in helping his side win a game they threatened to lose. 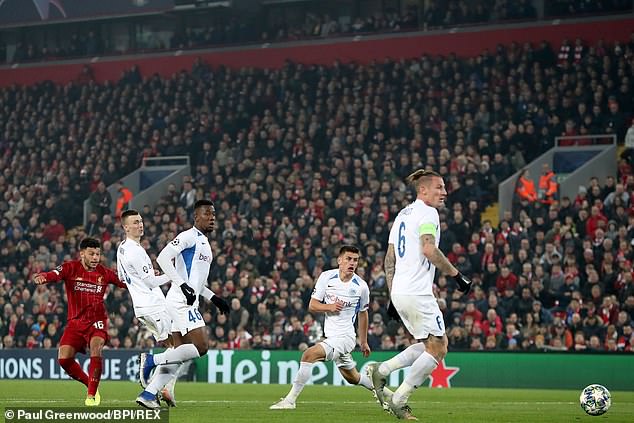 He has different creative qualities to Liverpool’s other midfielders, the ability to do something special from nothing. It has been no easy task to get back to this level of fitness, following knee reconstruction surgery, but the signs during autumn have been encouraging.

Assuming Jordan Henderson recovers from illness, he will start – as will Fabinho – in a game that will have ramifications on the title race but who else will be alongside them? Gini Wijnaldum would be the obvious answer and he provided plenty of dash – and a goal of his own – against Genk.

Yet if Oxlade-Chamberlain is fit for duty – it was worrying to see him with an ice pack on his right ankle at the final whistle – he has done his chances no harm. Belief is flooding through him once more. His favourite opponents will have taken note.