Alex Scott learned her ex Kelly Smith had a drinking problem at the start of their eight-year relationship.

The former couple enjoyed their first date together but Alex, 37, said Kelly drank heavily during their second outing when they went to see Mary Poppins in the West End.

She said: ‘Here I was, madly in love for the first time in my life, with an alcoholic. It didn’t bode well.’

Troubles: Alex Scott, 37, learned her ex Kelly Smith, 43, had a drinking problem at the start of their eight-year relationship

BBC sports host Alex was 19, and Kelly, 43, was nine years older at the time.

Kelly has spoken openly about her past battles with alcohol and depression – she she previously checked into rehab twice.

She previously told MailOnline: ‘Rehab was tough. Knowing that you’ve got a drink problem and all the issues and thought processes that I had in my head without talking to anybody about it.

‘I was just numbing myself with alcohol. I felt better for coming out the other side. It’s part of my history and I don’t really think about it too much any more. 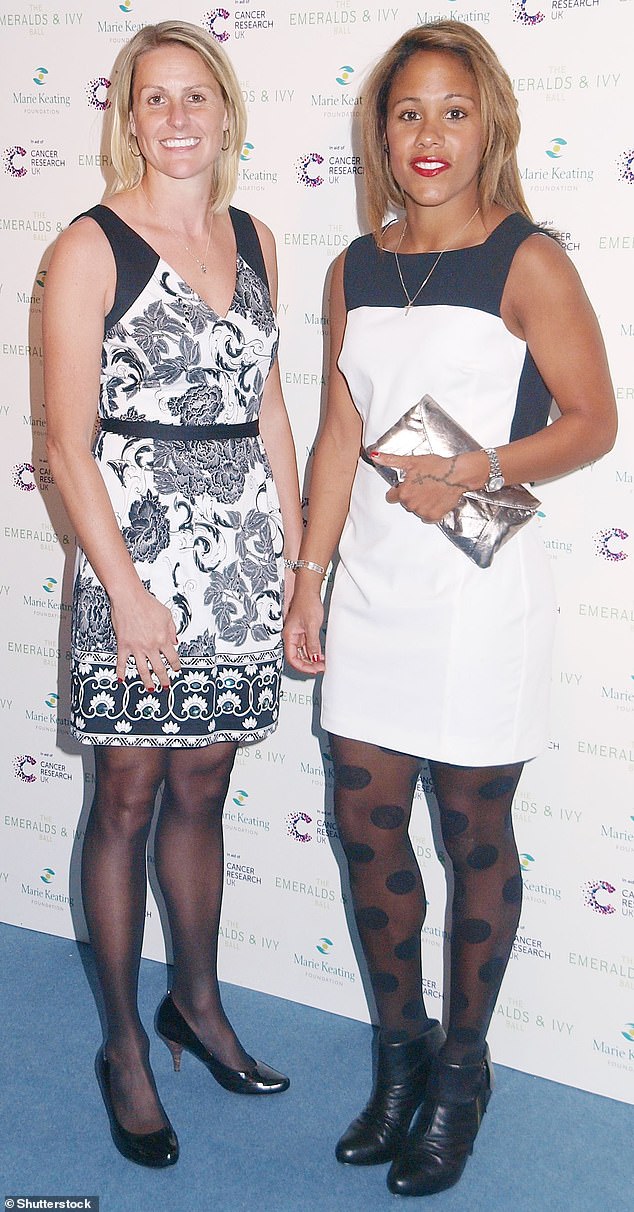 Former flames: The former couple enjoyed their first date together but Alex said Kelly drank heavily during their second outing (pictured in 2012)

‘Now, when I have an injury, I don’t hit the bottle. I still think about it, but I don’t go down that route. I speak to my friends, speak to family members if I’m feeling down and just get my feelings out rather than neck a bottle of vodka.’

The footballers were able to make their relationship work as they moved from Arsenal to US club Boston Breakers.

Sportswoman Kelly said the couple decided to split in 2013 in her newly released memoir How (Not) To Be Strong.

It comes after Kelly, whose father was an alcoholic, told how she was ‘madly and deeply in love’ with fellow former England footballer Kelly. 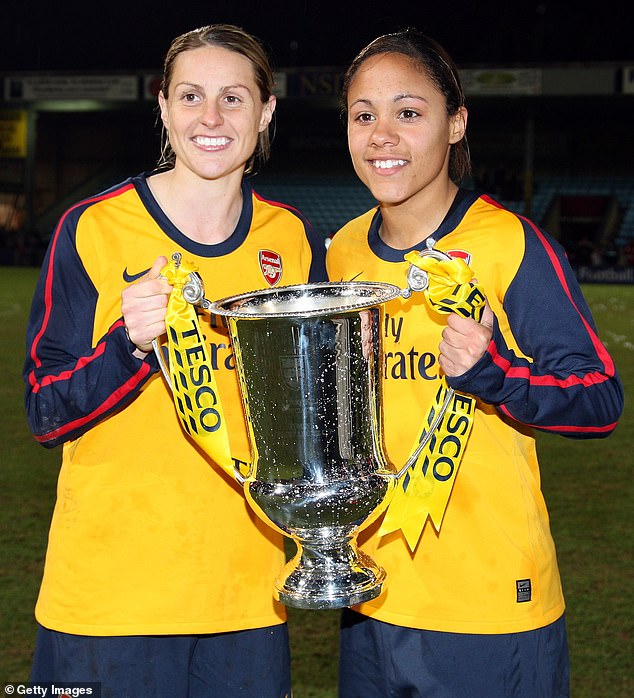 End of the road: Sportswoman Kelly said the couple decided to split in 2013 in her newly released memoir How (Not) To Be Strong (pictured in 2009)

Alex and Kelly – who now has two children with her wife, management consultant DeAnna Dobosz – both signed for Arsenal in 2005.

They went on to both join US team the Boston Breakers in 2009, before they re-joined the Arsenal team in 2012.

The Football Focus presenter admitted she was initially unsure about whether to pen a chapter about the relationship.

She said: ‘I went back and forth on whether I’d actually be writing the chapter.

‘But then it was one of those moments, I’m writing this book and I want to tell everything.’

Alex later realised she would be ‘cheating’ her fans if she didn’t include it in her book, insisting it ‘needed to be in there’.

She added to the Daily Mirror newspaper: ‘I thought I’d be cheating you all if I didn’t put that in there. And for me, it’s like that first love story, I fell madly and deeply in love. And yes, there’s that heartbreak and those things, but it’s a huge part of my life and I wouldn’t go back and change that.

‘Because that feeling of love and that excitement and what it gives you, it needed to be in there.’

Football pundit Alex has described her father Tony Scott as a ‘controlling violent drunk’ who was ‘stupidly cruel’ and that she and her brother would frequently hear him beating their mother – with one incident so violent that she believed that she had died. 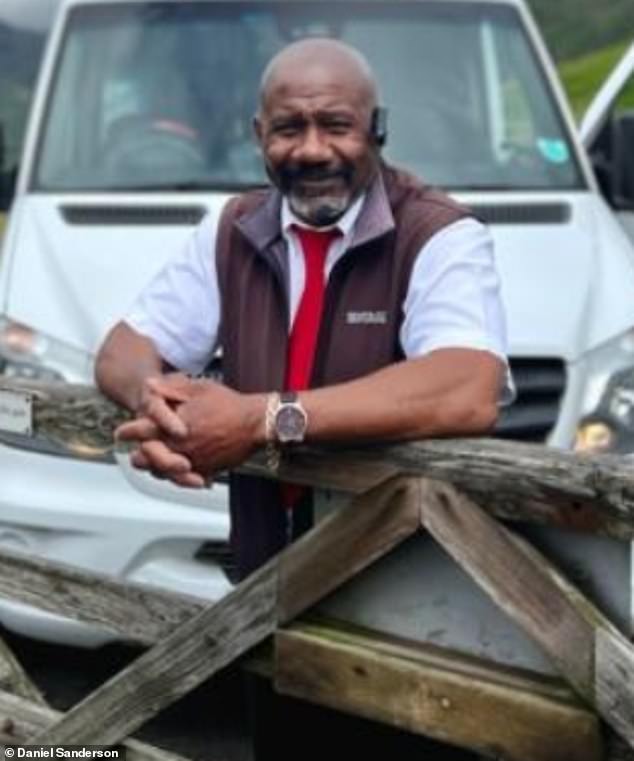 On one occasion she recalled how he beat them and made them throw their toys away insisting that life under him has left her so traumatised that to this day she is unable to hug her mother Carol or brother Ronnie.

Alex, 37, was comforted by Holly Willoughby after breaking down in tears on Monday’s This Morning as she spoke about life under her father prior to him walking out on her mother and leaving the family home in east London when she was seven.

Speaking exclusively to MailOnline, Mr Scott, 63 vehemently denied the allegations and said he could not understand why Alex is portraying him in this way.

He cried: ‘I have no idea why she’s saying all this stuff. I was raised in a strict but loving Jamaican family and Alex should know what they are like. I taught her discipline, I did a lot to help her. 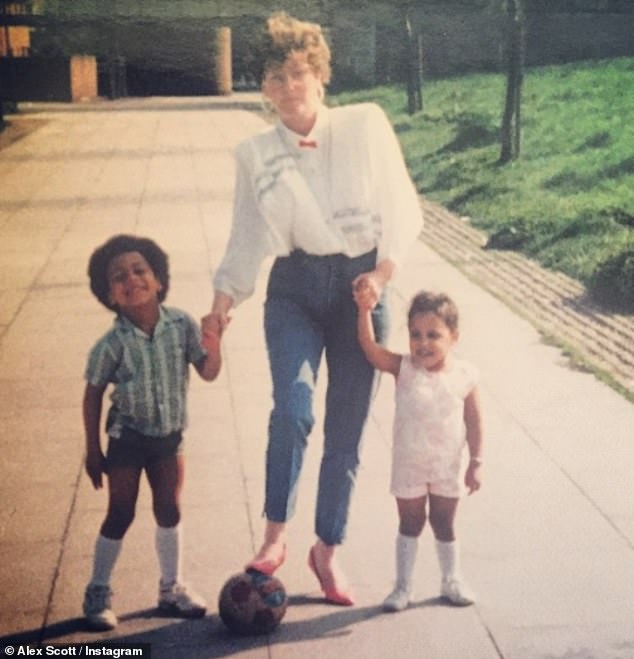 Family: Alex recalled when he beat them and made them throw their toys away. She said life under him has traumatised her so much that to this day she is unable to hug her mum Carol (pictured with her mother and brother Ronnie in an old photo)

‘Perhaps she is judging me by today’s standards, I don’t know. Parents were a lot tougher back then. But I was never violent, that’s just not me. I never beat Alex or anyone else in the family or did anything like that.’

Appearing on This Morning, the former Lioness who played for Arsenal, admitted that discussing her traumatic past in interviews to promote her memoir ‘How (Not) to Be Strong’ was the ‘hardest part.’

She revealed that, despite writing about her distressing formative years in the book, she claimed to not have spoken it out loud – and began crying when Phillip Schofield read a segment promoting his co-host Holly to rush over and give her a big cuddle.

Alex wrote: ‘When my dad was sober he was a charming guy, but the moment drink was involved that would change. Me, my mum and brother have never spoken about it.’

When Schofield asked Alex whether it was ‘difficult to write’, she took a moment to regain her composure while filling up with tears.

She said while bawling: ‘The hardest part is, I didn’t write that chapter to shame my dad. I wanted my mum to be free.’ 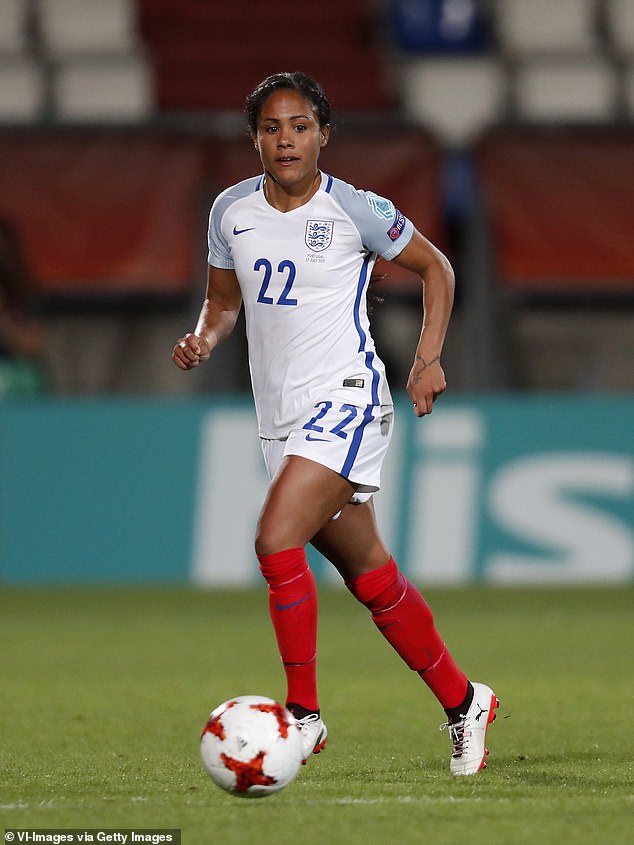 Dream: Alex and Kelly – who now has two children with her wife, management consultant DeAnna Dobosz – both signed for Arsenal in 2005 (Alex pictured in 2017)