The news comes just six months after the beloved presenter, 78, revealed he had been diagnosed with pancreatic cancer.

‘I’ve gone through a lot of chemotherapy. Thankfully, that is now over. I’m on the mend and that’s all I can hope for right now,’ Trebek said.

Trebek announced in March that he had been diagnosed with stage 4 pancreatic cancer.

Trebek said that early on in his treatment he suffered from excruciating pain both on and off camera while working on the quiz show but persevered with the treatment.

‘I was on the floor writhing in pain. It went from a 3 to an 11,’ Trebek said. ‘And it happened three or four times that day while we were taping. So, that was a little rough on me.’

Trebek credits his incredible progress with not just the help of medicine, but also the love of his fans.

‘I’ve got a couple million people out there who have expressed their good thoughts, their positive energy directed towards me and their prayers,’ he said.

‘I told the doctors, this has to be more than just the chemo, and they agreed it could very well be an important part of this.’

‘I’ve got a lot of love out there headed in my direction and a lot of prayer, and I will never ever minimize the value of that.’

Trebek revealed that he became emotional after hearing he was nearing remission in May. ‘But they were tears of joy,’ he said. ‘Not tears of depression.’ 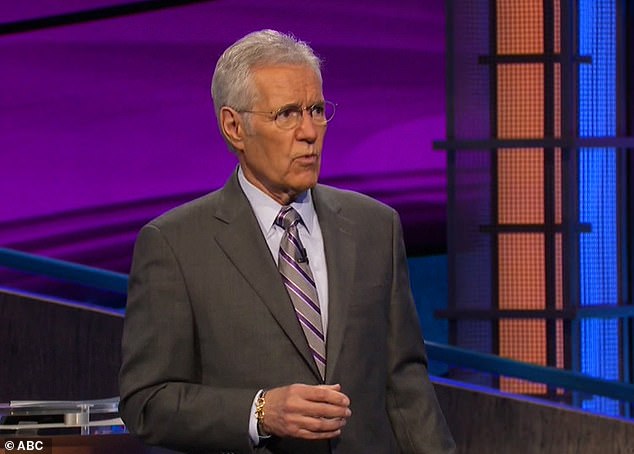 Trebek credits his incredible progress with not just the help of medicine, but also the love of his Jeopardy! fans

Trebek has been candid about the emotional and physical pain he has suffered throughout his cancer battle.

He revealed in April during a particularly grueling period of treatment that there would be days where he was hit with stomach cramps so excruciating they left him crying in pain in his dressing room.

‘This got really bad,’ he told CBS Sunday Morning’s Jane Pauley. ‘I was on the floor writhing in pain. It went from a three to an 11. And I just couldn’t believe it, I didn’t know what was happening.’

But Trebek said he would ask the crew for pain pills and soldier on, refusing to cancel any episodes.

In another interview with Good Morning America around the same time, Trebek revealed there were days when the cancer left him feeling a ‘deep, deep sadness’. 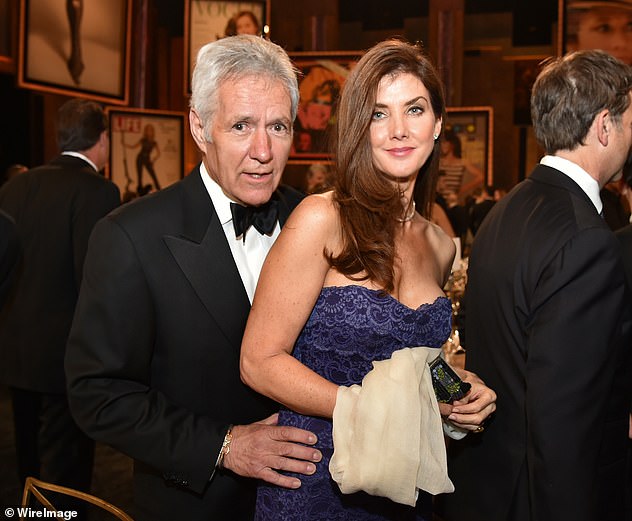 The beloved Jeopardy! host, pictured with his wife Jean in 2014, was diagnosed with stage 4 pancreatic cancer in March

Pancreatic cancer is usually diagnosed in its later stages, because symptoms are rare early on.

Alex Trebek, like most others, was diagnosed in stage 4.

But Trebek says, against the odds, his tumors have shrunk 50% since he started chemotherapy.

EARLIEST STAGES: Before it has spread, surgery is the preferred option, followed by chemo and/or radiation therapy.

BORDERLINE SPREADING: Some cancers have almost reached nearby blood vessels. In that case, doctors use radiation therapy and/or chemo in a bid to shrink the tumor to then remove it surgically.

LOCALLY ADVANCED: If the cancer has spread slightly, chemo and radiation therapy are used together.

ADVANCED: For metastatic pancreatic cancer (i.e. cancer that has spread far from the original site, like Trebek’s), chemotherapy is the first-line option.

Radiation therapy is often used in late stages of other types of cancers, but it has been ineffective with painful side effects in some pancreatic cancer trials.

‘I’ve discovered in this whole episode, ladies and gentleman, that I’m a bit of a wuss,’ he continued with his famous good-natured humor. ‘But I’m fighting through it.’

Trebek joked that he got ‘lucky’ because his diagnosis came at the end of the Jeopardy! season.

‘We wrapped up the season and now I have the summer months to recuperate and get strong again,’ he continued. ‘I just have to get strong because, as you know, the chemo takes it out of you. I mean, I feel so weak all the time and that’s not a good place to be.’

‘Chemo affects people in different ways and people have to understand that,’ he added. ‘There’s nothing wrong with saying, “Hey, I’m really depressed today and I have no idea why, why am I crying today?’

Roberts, herself a fellow cancer survivor, noted that the host was ‘quintessential Alex Trebek’ when he walked into the studio that morning and cracked jokes with everyone.

‘I just take it as it comes,’ Trebek said as he discussed his chemotherapy. ‘I go in, I sit down, I joke with the nurses and I’m there for an hour-and-a-half while they inject all this stuff into me and then I go home and have a good day.’

‘Then the next day, for no reason that I can fathom, it turns south on me – but that’s okay. You have to deal with it. What am I gonna do? It’s something I’m afflicted with, we are dealing with it chemically and spiritually and those are positives.’

‘Hopefully everything is going to turn out well and I’ll be back on the air with original programming this September.’

Trebek announced his devastating diagnosis in a YouTube video to Jeopardy! fans in March, joking that he had to beat the cancer because he was contracted to host the show for the next three years. 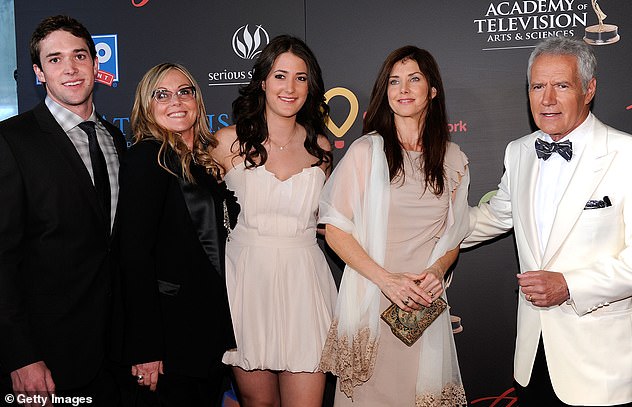 ‘I’m going to fight this, and I’m going to keep working,’ he bravely declared. ‘Keep the faith, and we’ll win, we’ll get it done.’

At the end of the day, Trebek said his entire battle with cancer has made him realize he’s an ‘extremely lucky individual’.

‘In spite of the fact that this diagnosis is not a good one, I have managed to receive so much love from so many people,’ he said.

‘Quite often, you don’t get that during your lifetime. After you’re passed, after you’re dead, people say, “Oh, he was such a good guy we really liked him”, but I’m getting that all before that event. So it makes me feel really, really good.’