Alexander Volkanovski is planning to create history on home soil, when he takes on rising superstar Islam Makhachev for the lightweight championship in Australia early next year.

Makhachev claimed the vacant lightweight belt with a impressive second round submission victory over Charles Oliveira at UFC 280 on Sunday morning.

The Dagestani looked dominant both on his feet and the ground against Oliveira, whom he controlled easily in the opening round. 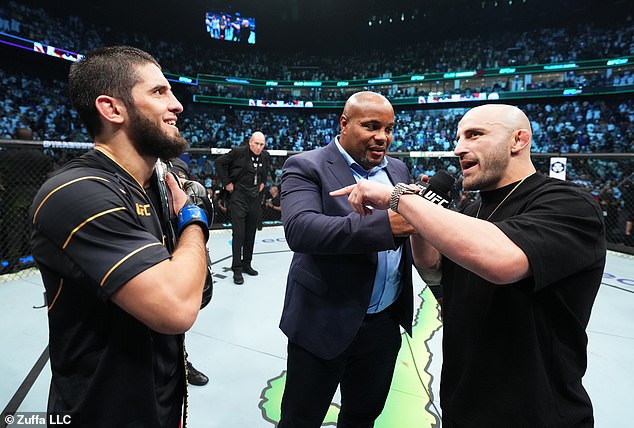 Australia’s Alex Volkanovski (pictured left) accepted the challenge to take on the new lightweight champion in Australia early next year. If Volkanovski wins he will become a two-division champion

Makhachev then dropped the former champion in the second and submitted him with a head-and-arm choke to take the lightweight title and cement his status as one of the most dangerous fighters in the organisation.

‘Now is our plan, fly all the way to Australia and fight in the pound-for-pound king’s back yard, Volkanovski,’ Nurmagomedov said.

Makhachev then added: ‘Where is the short guy?’. 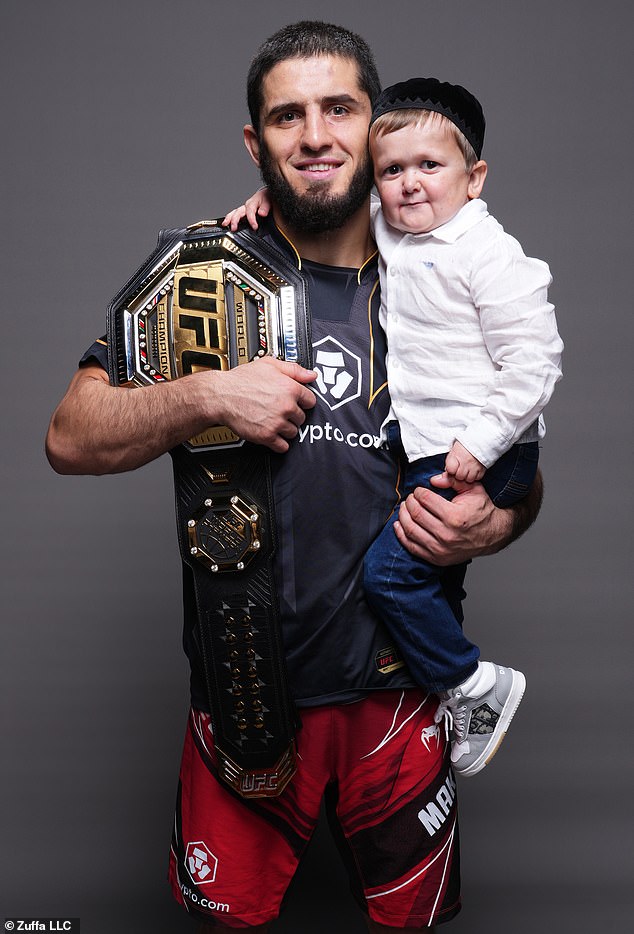 Volkanovski was of course in attendance at the event – and was videoed earlier in the show spitting into a shoey that countrymen Tai Tuivasa then proceeded to drink.

The Aussie responded to Makhachev’s taunt by stepping into the Octagon and squaring up to the new champion.

‘The lightweight belt on the line, the pound-for-pound No. 1 on the line. Let’s do it,’ he said before shaking hands with Makhachev.

The 34-year-old already holds the featherweight title and now wants to emulate what only Conor McGregor, Amanda Nunes, Daniel Cormier and Henry Cejudo have done by holding two belts from two divisions simultaneously.

Volkanovski is on a 22-fight winning streak and hasn’t lost since 2013, but a move up in weight against Makhachev is a tall order.

Commentator, and former champion, Daniel Cormier sees him having a real chance. But also admits he thought the same thing about Oliveira.

‘That is where Alexander Volkanovski could present some problems. He builds a gameplan and the team at City Kickboxing and Freestyle Fighting Gym build gameplans that allow for him to be so spectacular.

‘I believe his footwork, his ability to follow said gameplan, could cause Makhachev some problems. Do I anticipate that? I don’t know because Charles Oliveira is as good as anyone and as good on the ground as anyone and on the feet as anyone.’ 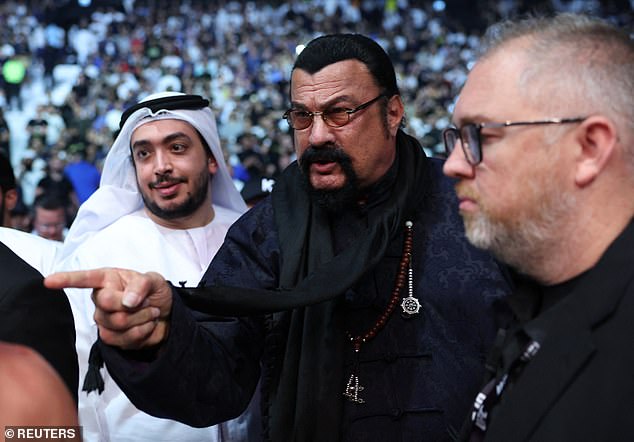 Volkanovski was interviewed after the event about the planned showdown with Makhachev and the Aussie seemed confident as ever.

‘It’s all worked out perfectly,’ he said. ‘Trust me, I’m one hard man to hold down. I guarantee I’m back on the feet and it’ll be a standup fight.’

The pair will square off at Perth’s RAC Arena on February 12 as top-level MMA returns to Australia for the first time since 2019. A host of other top Aussie fighters are expected to feature, including Rob Whittaker, Jack Della Maddalena and Tai Tuivasa.