Alexander Zverev has vowed to donate his Australian Open prize money worth $4million to the bushfire appeal if he wins the tournament.

The 22-year-old seventh seed has not been in the best of form, however, so his further pledge of $10,000 for every match he wins in the tournament might work out to be a more realistic donation.

The German conceded that he was not the favourite to raise the trophy on February 2 but, if he did, the $4.12million first prize would be by far the largest individual donation to the Aces for Bushfires appeal.

‘If I win the Australian Open, I will be the happiest person on the planet. I think that the (money) will be in much better use in the hands that know what to do with it, and know how to help others.’

Zverev, who has never won a Grand Slam, reached the second round of the Australian Open with a 6-4, 7-6 (4), 6-3 victory over Marco Cecchinato on Tuesday.

He made heavy work at times of his first-round victory over world number 77 Cecchinato but was just pleased to be back in the winners’ circle after losing his first three matches of the season at the ATP Cup.

In those contests, his faltering serve had undermined his confidence and only four double faults combined with a first serve completion rate of 84% was another big plus from his baseline battle with the big Italian. 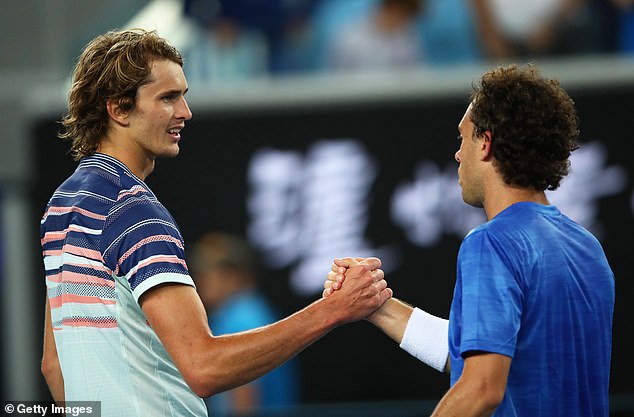 ‘This is a positive for me. Obviously there’s a lot still to build. I think this is already getting better. So hopefully I can still get better in the next few days, maybe weeks.’

Zverev found himself in a bit of a hole at 4-2 down in the first set, but he dug himself out with consecutive breaks of the Italian’s serve and wrapped up the first set after 40 minutes.

The second set was an hour-long battle which the German won on a tiebreaker, and an early break of serve in the third set sent him on his way to victory and a meeting with Egor Gerasimov of Belarus.

Swiss player Belinda Bencic last week pledged a donation to the bushfire appeal for every double fault at the Australian Open and suggested Zverev did the same after his problems at the ATP Cup.

But the suggestion got short shrift from the German.

‘Yeah, no,’ he said. ‘It was fun and all that, but I think it should be a positive thing, not double-faulting.’ 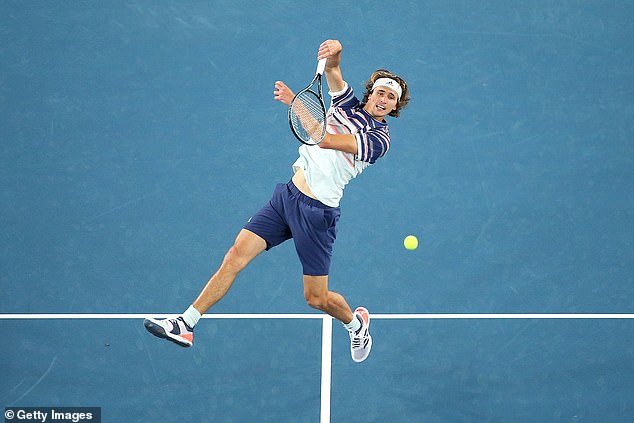