Matthew Cobden, 39, arrives at Winchester Crown Court today ahead of his sentencing

A businessmen who killed a 13-year-old while ‘showing off’ his £1.2million supercar without making the schoolboy wear a seatbelt has been jailed for 18 months today.

Alexander Worth was thrown from the F50 supercar after Matthew Cobden, 39, from Walton-on-Thames in Surrey, lost control on August 22, 2016.

The schoolboy had jumped into the supercar ‘in a flash’ when Cobden offered to take him for a short drive instead of having a photograph taken.

But minutes later the Ferrari ‘accelerated uncontrollably’ in a farm lane, causing it to flip and throw the pair, who were not wearing seatbelts, from the car.

Cobden, of Walton-on-Thames, Surrey, was found guilty at Winchester Crown Court of causing the death by careless driving of Alexander Worth.

He was also banned from driving for two years and ordered to take an extended retest. 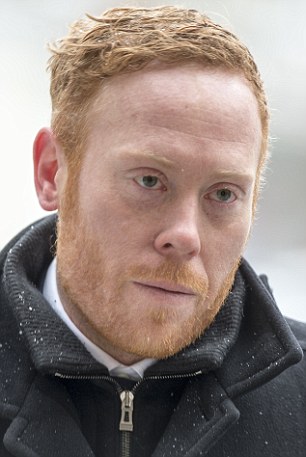 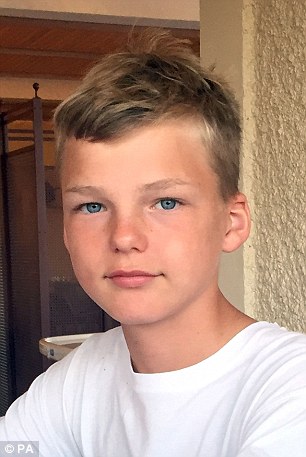 Matthew Cobden, 39, from Walton-on-Thames in Surrey, lost control of the Ferrari F50 on August 22, 2016, while taking Alexander Worth for a drive 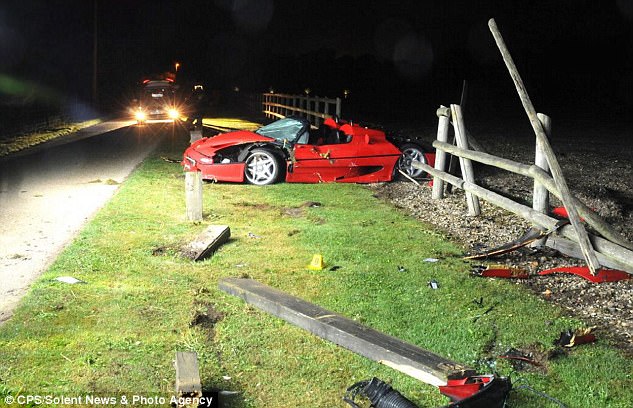 This is the crumpled heap that remained of the Ferrari following the crash. Cobden wept in front of jurors when he told them he was sorry he had not asked the child to wear a seatbelt

Sentencing Cobden, Judge Keith Cutler said: ‘You decided to to put your foot down, the Ferrari was unnecessarily in second gear, it could have been in first gear, and you put your foot down in order to cause a thrill for Alexander, you were showing off, that is the explanation for the accident and its consequences.

‘In accelerating such a powerful vehicle, you lost control of it.

‘Your evidence was that while you were experienced in driving such cars, the surge of power took you by surprise.’

He added: ‘Nothing that this court can do can bring Alexander back to his mother and father and his family. Nothing that I can do can properly reflect or compensate that loss of his life.’

CCTV of Alexander’s final moments was released. The schoolboy, in a white T-shirt, can be seen approaching the red Ferrari

Alexander initially climbed in to have his photograph taken. However, businessman Matthew Cobden, 39, instead said he would take the teenager on a drive 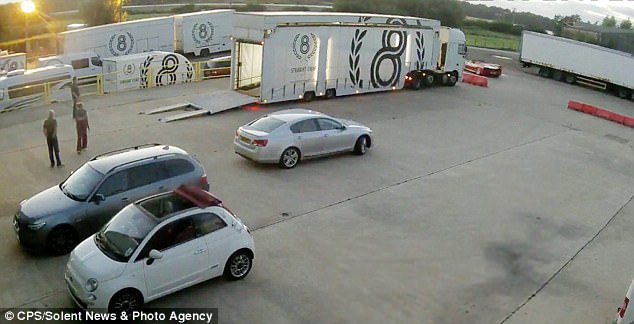 Moments after disappearing from shot, Cobden lost control, causing the vehicle to smash into a wooden post and fly through the air 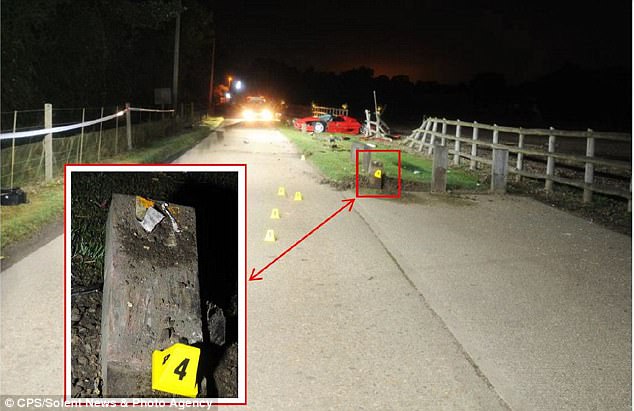 The teenager’s ‘distraught’ mother Arabella had rushed to the scene after hearing a ‘bang’ and found her motionless son dying, as Cobden said: ‘I’m so sorry, I’m so sorry.’

The supercar, capable of reaching 60mph in under four seconds, hit a wooden post travelling ‘at least 40mph’ when Cobden pressed the accelerator.

Cobden denied causing death by careless driving, saying the car had a mechanical defect, but was convicted after trial at Winchester Crown Court.

As the 10-2 majority guilty verdict was delivered, Cobden took a deep breath and bowed his head. He left the dock with tears in his eyes.

After the verdict Alexander’s family issued a statement saying: ‘The outcome of this trial will not bring Alexander back.

‘But we hope the media coverage has in some way increased awareness of the fragility of life and the danger of driving powerful cars for however short a journey and the necessity of adhering to all sensible safety measures.

‘We ask for the family’s privacy to be respected whilst we continue to come to terms with the tragic loss of our very special boy.’