Alexandria Ocasio-Cortez led a grilling of a pharmaceutical CEO over the $2,000 price tag on an HIV-prevention drug which costs less than $10 in other markets.

Experts say that the US could end HIV transmissions by 2030 if 1million more Americans were taking the drug, known colloquially as PrEP (pre-exposure prophylaxis).

But the price has made it inaccessible to many, leading to thousands more HIV diagnoses in the past four years alone – as Gilead rakes in $3 billion a year in revenue.

At a committee hearing on Thursday, Rep Ocasio-Cortez demanded Gilead CEO Daniel O’Day to explain why they would not lower the price.

‘There’s no reason this should be $2,000 a month. People are dying because of it and there’s no enforceable reason for it,’ Ocasio-Cortez said.

O’Day responded that Truvada is patent-protected in the US, unlike in the rest of the world.

Generics will be available when the drug comes off-patent in September 2020, at which point Gilead has allowed an Israeli company, Teva, permission to make a competitive drug.

However, activists say one competitor is not enough to reduce the price significantly.

What’s more, in recent months it emerged the US Centers for Disease Control and Prevention (CDC) does hold patents on PrEP, a drug which was developed by US taxpayer-funded research, to the tune of roughly $50 million. 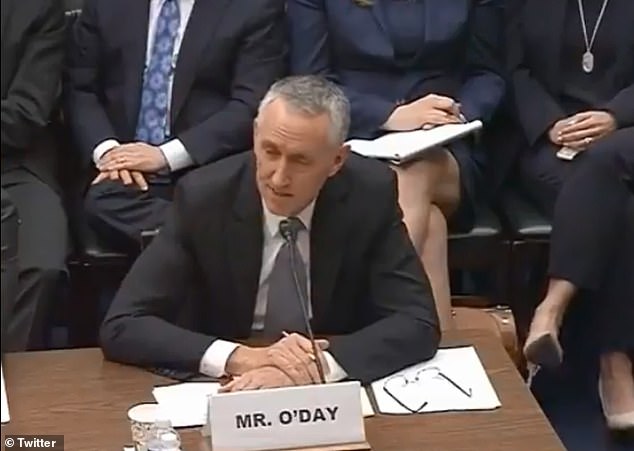 Gilead CEO Daniel O’Day said that Truvada is patent-protected in the US, unlike in the rest of the world

James Krellenstein, an AIDS activist and co-founder of PrEP4All Collaboration, was the first to be informed about the patent last year, after he wrote an op-ed in the New York Times calling for cheaper PrEP.

He received a call from a scientist at the CDC, who informed him the government agency has held patents since 2015, and since then 150,000 more Americans have contracted HIV.

A review of the patents, conducted independently by Yale University School of Law confirmed their validity.

Now, as senators interrogate Big Pharma, Krellenstein and other activists are demanding answers from the CDC, including holding a protest at a speech given by CDC director Dr Robert Redfield.

‘The US government routinely sues companies for patent infringement, they routinely sue generic companies to enforce their patents. And yet, they have never sued over Truvada,’ Krellenstein told DailyMail.com.

‘The CDC has given zero reasons for how they could be so negligent.’