Even at the age of six, Alfie Barbeary stood out from the crowd.

English rugby’s latest sensation first picked up a ball at Banbury Rugby Club and those who worked closely with him as a small child immediately marked him out as a supreme young talent.

Mark Horrocks first cast his eye on Barbeary – who was named in Eddie Jones’ Six Nations squad on Tuesday after a stellar season for Wasps – at Banbury. 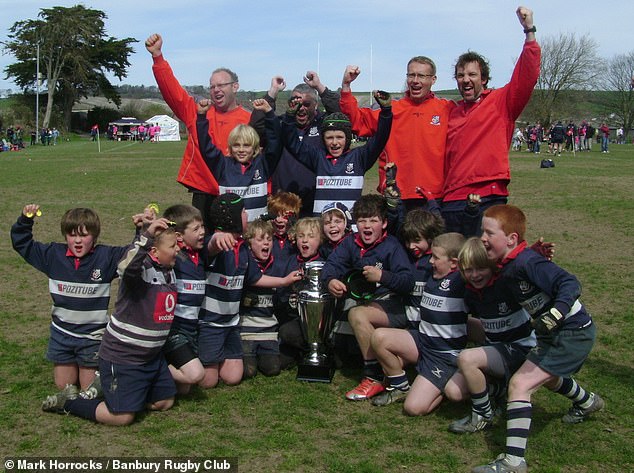 Barbeary (bottom row, fifth right) has come a long way from a six-year-old prodigy at Banbury

Horrocks coached Barbeary from six until 14 and the new England back-row credits him as his biggest early influence. ‘He was an extraordinary kid,’ Horrocks told Sportsmail.

‘One memory we always talk about is when we played Chinnor. Alfie would have been 13.

‘His trademark then was to pick the ball up and run straight through the middle of a ruck. He still does that in the Premiership now and he did it that Sunday morning at Chinnor.

‘One of the opposition jumped on him to try and bring him down, but Alfie ran for a good 30 metres with the kid on his shoulder. The kid eventually slid off like a blancmange off a plate. 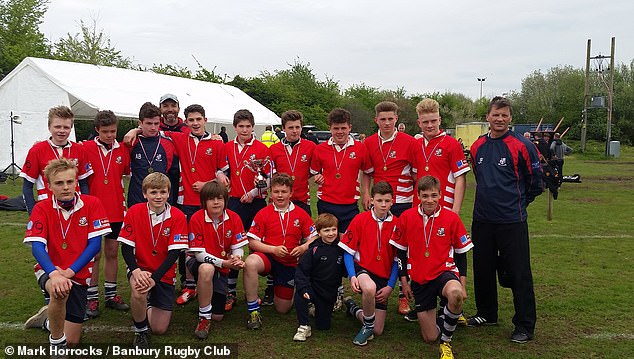 The Wasps star (back rom, fourth right) has barely changed his style of play since Banbury

‘It was extraordinary and very much like when George North and Israel Folau collided in 2013. The only difference was Alfie went further than North!’

Born in Banbury and raised in the Oxfordshire village of Deddington by parents Nick and Denise, three things were immediately obvious about a young Barbeary.

His talent, size and competitive instinct all stood out as Banbury and Bloxham School – where Barbeary was educated – swept all before them.

Horrocks said: ‘It was tag rugby when we first started with Alfie, but he played it like proper rugby! ‘He did stand out, initially because of his size, but he was always pretty direct. Alfie became more of a force as we started to do contact rugby because he just kept growing. He was very strong. 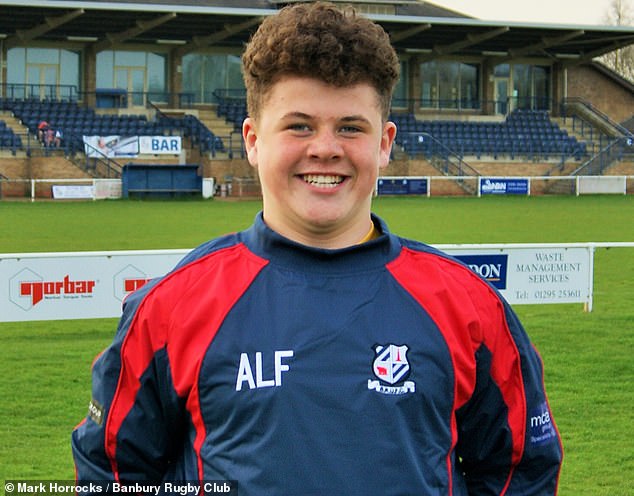 Barbeary’s talent, size and competitive instinct all stood out during his early years of playing

‘We always worked really hard on skills, but because he was so strong, we had a few problems with disciplinary things even though Alfie was never a dirty player. He was so competitive.

‘There were lots of tears when he lost. When we got to 15-a-side, we had a choice over whether to keep him in the scrum or put him in the backs.

‘We moved him to centre which Andy Goldsmith, who coached him at Bloxham, did too. That definitely helped him because it gave him awareness of running and support lines which are now innate in his game. We joke Alfie was our third-choice hooker, but he really was!’

Where best to utilise Barbeary’s natural ability is a question that has posed his coaches throughout the now 21-year-old’s career. He was a back at school and, after making a rapid progression at Wasps soon after moving from Bloxham, Jones was initially keen on him to settle down as a hooker. Now, the back-row is his domain. 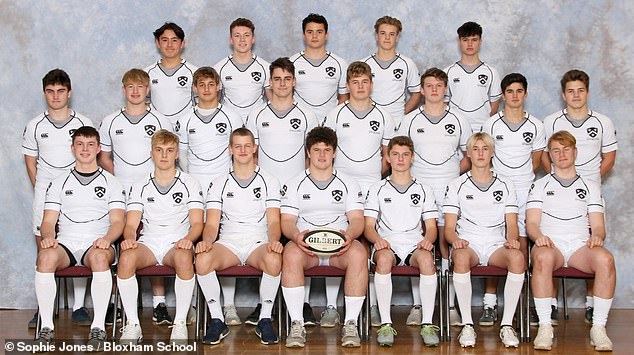 It was at Bloxham where Barbeary honed the basic skills he learned at Banbury and took his game to the next level. At 16, he was soon into the school’s first XV two years ahead of schedule and his 24 tries in one season broke Bloxham’s previous scoring record which had stood for 32 years.

‘He’s definitely the best we’ve seen,’ said Simon Batten, Bloxham’s assistant coach who has worked at the school for the last 37 years and dovetailed with Goldsmith to help Barbeary thrive.

‘He was doing in schoolboy games what he’s doing in Premiership games now. He was unstoppable, really. We fast-tracked Alfie into the team when he was in fifth form.

‘We played him at No 8 and centre, but to be honest the number on his back was meaningless. Alfie always played with a smile on his face and he was always positive. 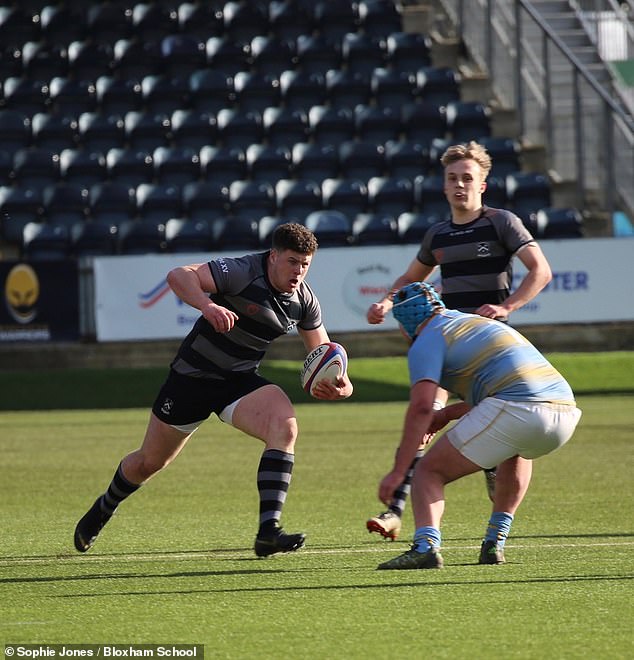 The teenager was described as ‘unstoppable’ at Bloxham, where he played No 8 and centre

‘There was nothing major he did wrong, but I’d say he was a bit of a loveable rogue. We’ve seen Alfie play for England at age group level, but to see him in the senior side for the Six Nations would be tremendous. Personally, as a Welshman, I just hope he doesn’t play too well against Wales!’

Just 23 days after turning 18 and barely out of school, Barbeary scored his first senior Wasps try. He had joined the now Coventry-based club at 16.

‘It was obvious he was very good straight away, but the first time I realised how good was when we played Yorkshire Carnegie Under-18’s,’ said Matt Everard, who was Wasps academy coach when Barbeary first joined. The pair still work together now at senior level.

Everard continued: ‘I remember saying to Alfie before that game “What’s your goal this weekend?” ‘He said “I don’t want to get tackled” which I thought was a ridiculous thing to say! 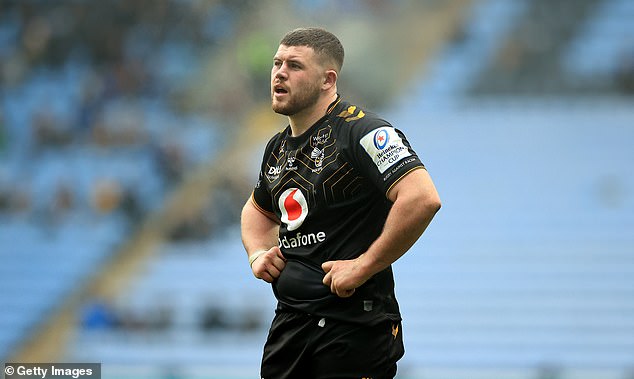 ‘He scored a hat-trick and was just phenomenal. It left me thinking ‘Oh my God’ and when I watched the game back, he didn’t get tackled once!

‘The mindset and intent to his ball carrying was amazing. He’s strong, powerful and fast, but he’s fiercely competitive. His mindset makes him as good as he is.’

The only thing to derail Barbeary’s rugby career so far has been injury. Syndesmosis and hamstring problems hindered him in 2021, but to see Barbeary in action in the past fortnight has been to witness a young man at the peak of his powers. Leicester and Toulouse will attest to that.

Barbeary’s superb, match-winning turnover helped Wasps end Tigers’ unbeaten Premiership run and then just six days later, he was man of the match in a famous win over the European champions. Jones has not been able to ignore such performances. 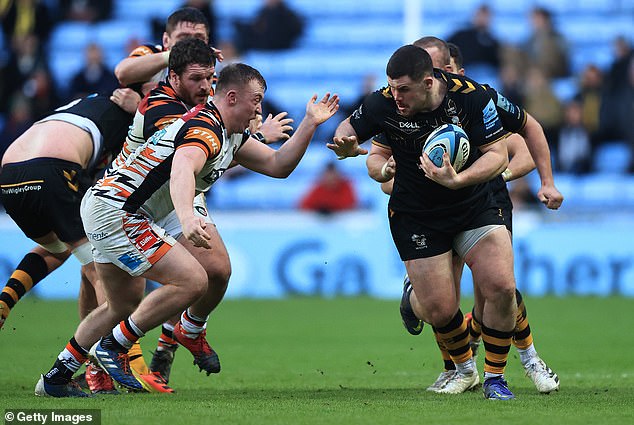 Barbeary – who enjoys a curry and a pint with his father – has been part of the Australian’s squad before purely as a learning experience, but now he is there on merit.

‘Alfie was always a big moment player when he was coming through and he still has that now. He has a point of difference around his ball carrying that is very special,’ said Everard.

‘What he is doing extremely well now is all the other little bits international back-rows are world class at. He’s got an exciting future and I love him to bits. When you’ve known someone since they were 15, you can’t help but have an emotional attachment. I’ve definitely got that.’

Kept grounded by his parents and older brother George, Barbeary lives in Leamington Spa with his friend Henry Hopkins, another former Bloxham pupil. He makes regular trips back to both his old school and Banbury. 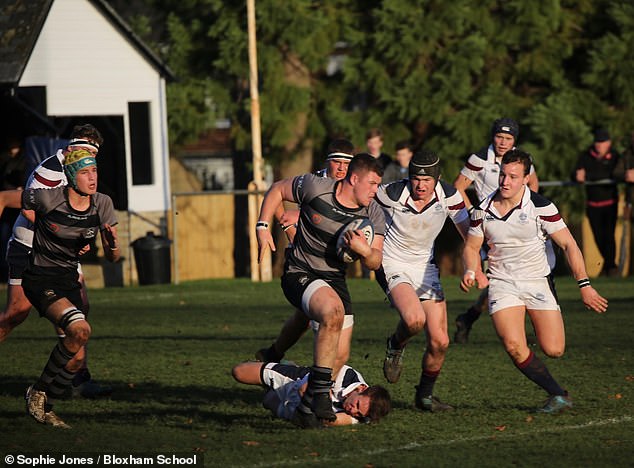 ‘Whatever Alfie achieves, I’m sure he’ll never forget Banbury and Bloxham and what they did for him,’ said Horrocks. ‘He always goes back to the club do trophy presentations and the kids look at him like he’s just stepped off a spaceship. Their eyes are like saucers.

‘To us, he’s just Alfie. He jokes to the lads about having a nice car, but his feet are definitely on the ground and even though Alfie is going from strength to strength, he still has the same mates who take the p*** and say how fat he is and how stupid his haircut is.

‘The influence he had on some games as a child was like a man playing against boys and he’s a bit like an old-school Gary Lineker in that he always wants to score.

‘If he does play in the Six Nations, I think he’ll do well because he has always risen to every challenge.’