Alfie Evans should have been at home to die, say his army of mourners

May 9: Alfie is born in Liverpool to parents Tom Evans and Kate James, now aged 21 and 20 respectively.

December: Alfie is taken to Alder Hey Children’s Hospital after suffering seizures. He will spend the next 12 months there.

December 11: Hospital bosses say they are ‘liaising directly’ with the family after disagreements over his treatment. Alfie’s parents said the hospital has applied to the High Court to remove parental rights and withdraw ventilation.

December 19: A High Court judge, Mr Justice Hayden, begins overseeing the case at a public hearing in the Family Division of the High Court in London. The hospital says continuing life-support treatment would not be in Alfie’s best interests, but his parents disagree and say they want permission to fly him to Italy for treatment. The judge says he will make a decision on what is best for Alfie.

February 1: A hearing begins at the High Court in Liverpool in which lawyers acting for the hospital claim further treatment for Alfie is unkind and inhumane.

February 2: One of Alfie’s doctors tells the judge there is ‘no hope’ for the youngster, who is in a semi-vegetative state from a degenerative neurological condition doctors have not been able to definitively identify.

February 5: Mr Evans tells the court Alfie ‘looks me in the eye’ and wants his help.

March 1: Three Court of Appeal judges begin analysing the case after Alfie’s parents mount a challenge to the High Court ruling. The family ask for the appeal hearing to be adjourned for a few weeks so they can discuss the ruling with lawyers, but the judges refuse. 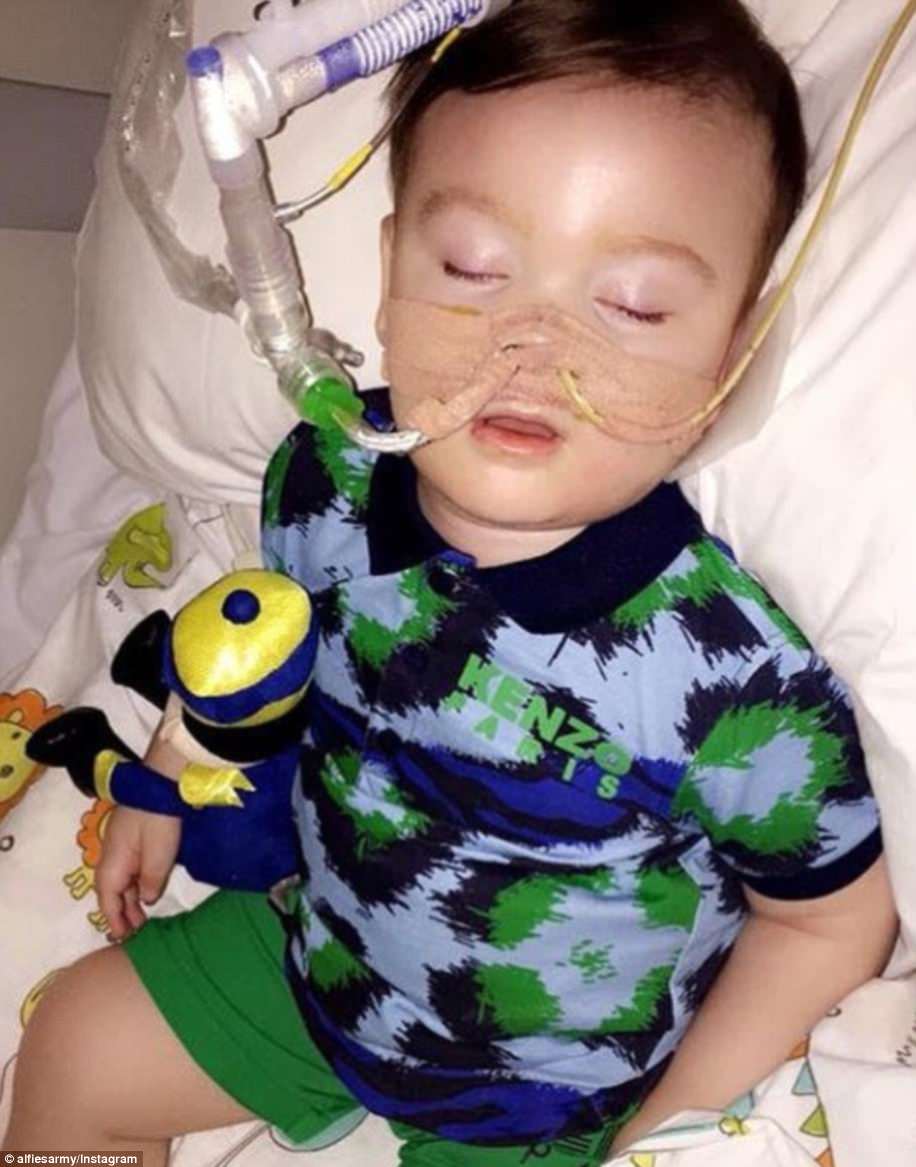 March 18 2018: As the family wait to hear back from the Supreme Court about their case, they share this photograph of the youngster being weaned of drug clobazam

March 8: Alfie’s parents ask for the case to be considered by Supreme Court justices.

March 20: Supreme Court justices decide the case is not worth arguing and refuse to give the couple permission to mount another appeal.

March 28: Judges at the European Court of Human Rights reject a bid from Mr Evans and Ms James for them to examine issues relating to Alfie’s future, saying they found no appearance of any human rights violation.

April 12: Protesters gather outside Alder Hey hospital as Alfie’s father insists he has the right to take him home. 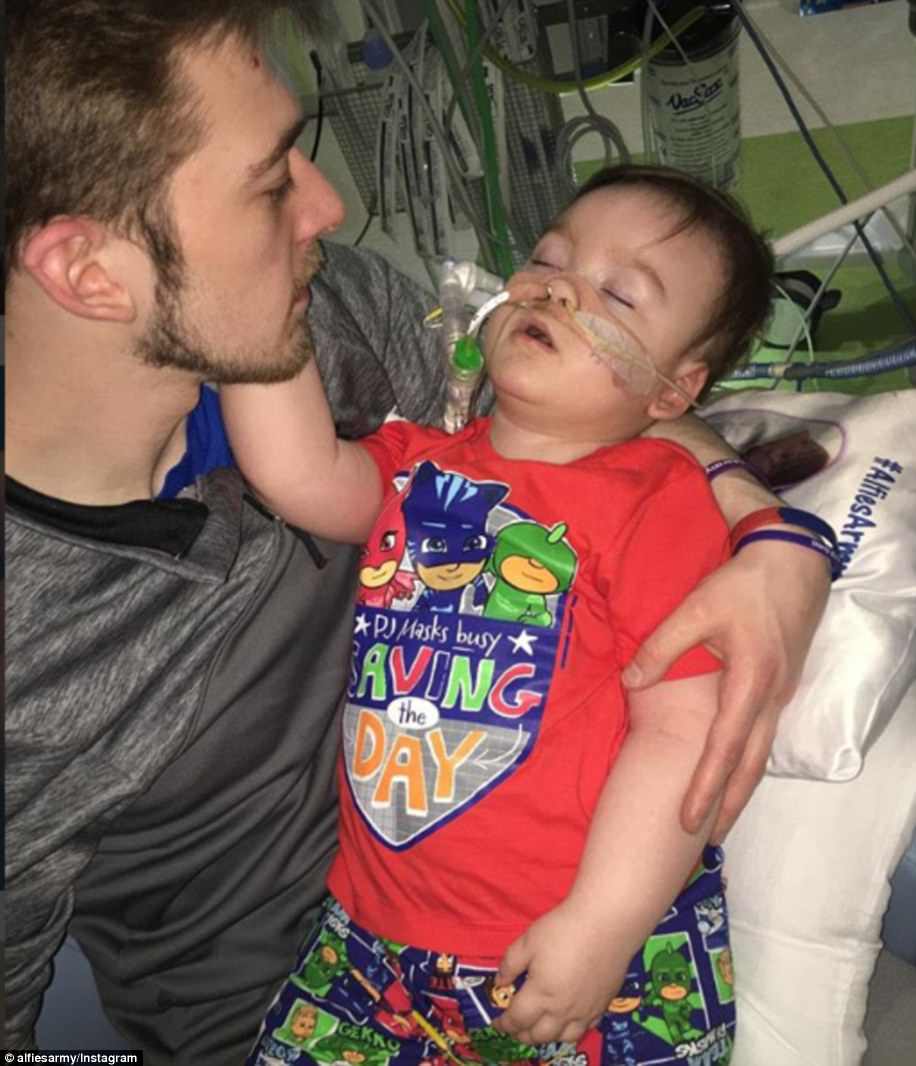 April 18 2018: This picture is shared as Alfie’s father flies to meet the Pope, with the caption, ‘I’d travel as many miles as needed, I’d climb the highest mountain’

April 16: Alfie’s parents argue he is being wrongly ‘detained’ at Alder Hey and make a habeas corpus application. Judges at the Court of Appeal in London rule against them and again uphold the decisions of Mr Justice Hayden. The couple’s lawyer said they might make a further appeal to the Supreme Court.

Merseyside Police launch an investigation into ‘instances of verbal abuse and acts of intimidation’ among protesters outside the hospital. Judges raise concerns about reports that ambulances and staff were unable to enter the hospital and that patients and their families had been frightened. Alfie’s parents apologise, saying they did not intend to ‘harm or cause conflict or upset’.

April 18: Mr Evans flies to Rome and meets with Pope Francis. He kissed the Pope’s hand and begged the leader of the Catholic church to save Alfie’s life.

April 20: The Supreme Court rules against Alfie’s parents for a second time, refusing them permission to appeal against the decision. Mr and Mrs Evans had been trying to persuade the court that Alfie was being unlawfully detained at Alder Hey hospital.

The parents make an application to the European Court of Human Rights in Strasbourg to take Alfie to Rome for treatment, instead of letting him come off life support.

A group of about 200 protesters tries to storm Alder Hey hospital, where Alfie has been receiving treatment. Police officers blocked the entrance as dozens of people charged at the doors.

Alfie Evans is granted Italian citizenship. In a bid to facilitate moving Alfie to Italy to receive treatment, the Italian Ministry of Foreign Affairs said: ‘Foreign minister Angelino Alfano and interior minister Marco Minniti have granted citizenship to little Alfie. The Italian government hopes that in this way, being an Italian citizen will enable the immediate transfer of the child to Italy.’

On Monday evening, a High Court Judge dismisses new submissions made in private by the lawyers for Alfie’s parents via telephone.

At around 9pm, life support is withdrawn by doctors at Alder Hey hospital, according to Mr Evans. He said in a Facebook post that his son had been breathing for himself since 9.17pm.

April 25: Alfie’s parents fail in an 11th-hour attempt to persuade judges to let them move the terminally-ill youngster to a foreign hospital.

April 26: Alfie’s parents pledge to work alongside doctors to give the boy ‘the dignity and comfort he needs’.

April 28: The 23-month-old – who was being treated at Alder Hey – died at 2.30am, Ms James and Mr Evans say on Facebook. ‘Our baby boy grew his wings tonight at 2:30 am. We are heart broken. Thankyou everyone for all your support,’ the post said.