CCTV footage of the day Alfie Lamb was crushed under a car seat shows the three-year-old struggling to keep up with his mother and her boyfriend, prosecutors say.

Alfie’s mother Adrian Hoare and her boyfriend Stephen Waterson are on trial for child cruelty and manslaughter over Alfie’s death, which came after he was crushed beneath an Audi’s electric car seat on the way home from a shopping trip.

Waterson had allegedly said: ‘I will not be told what to do by a three-year-old,’ before crushing the boy, a court has heard.

Afterwards, Hoare did not initially blame Waterson because her relationship with the 25-year-old was ‘just too important’, prosecutor Duncan Atkinson QC claimed today.

CCTV images show Alfie Lamb struggling to keep up with his mother (left), her boyfriend and their friends after a shopping trip in Croydon. He later died after being crushed by a car seat. His mother, Adrian Hoare, and her boyfriend, Stephen Waterson, are accused of manslaughter 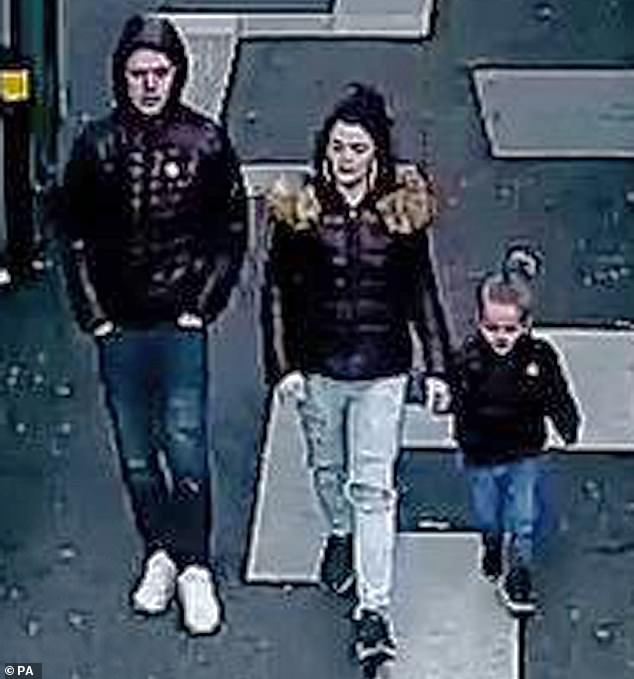 Prosecutors questioned Alfie’s mother, Hoare, on why the youngster was having to run 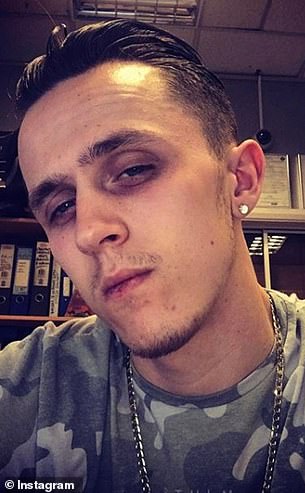 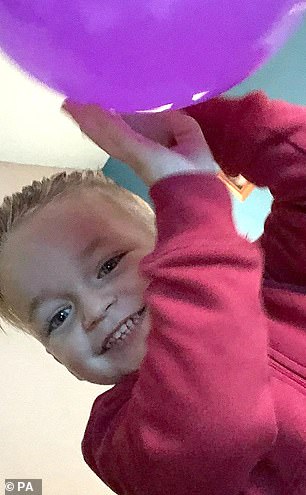 Stephen Waterson is accused of deliberately pushing an Audi’s seat back against Alfie Lamb, who later died from his injuries

Alfie collapsed in Waterson’s Audi convertible on the way home to Croydon from a shopping trip to Sutton, south London, on February 1 last year.

There were four adults in the car as well as two children who were forced to sit in the footwell.

Jurors were shown CCTV of 3ft tall Alfie appearing to run to keep up as the group set out from Halfords car park and later returned with their shopping.

Cross-examining Hoare, Mr Atkinson asked: ‘Whose pace are you walking at? What allowances were you making for Alfie’s little legs? Why is Alfie having to run?’

The defendant replied: ‘It’s just the way I walk even if it’s just me and Alfie. Alfie always runs.’

Mr Atkinson went on: ‘Until he got into that car on the way back from Sutton, he was fine wasn’t he?

‘And by the time that the car reached Adams Way he was very far from fine, wasn’t he? Something had to have happened in that journey?

‘So when doctors and police start saying something happened to Alfie, you knew it had to have happened in the car. Were you not thinking it must have been Stephen?’ 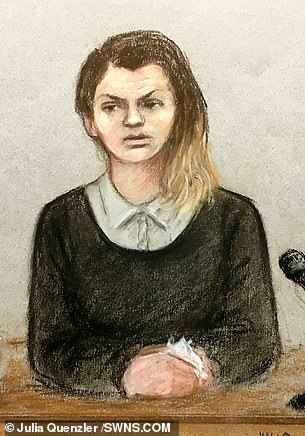 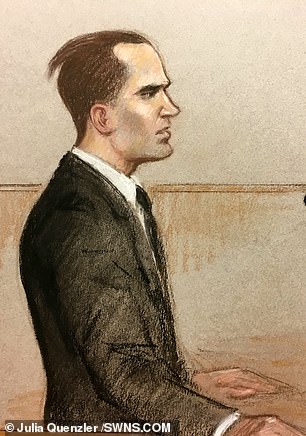 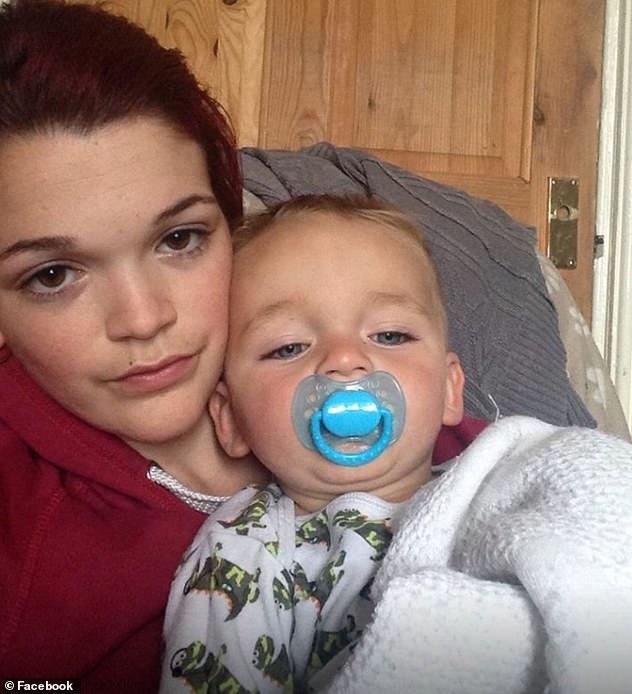 Hoare, 23, allegedly put Alfie in the footwell and did nothing to help him as he screamed out

Hoare replied: ‘Not straight away.’

The prosecutor asserted: ‘What Stephen had done with his seat he had done deliberately. He was annoyed the second time he moved his chair back?’

Hoare agreed, but added: ‘To begin with I did not blame anyone for what happened.’

Mr Atkinson said: ‘Was it your relationship with Stephen was just too important?

‘Wasn’t the reality you just put what Stephen wanted first?’

The defendant denied it.

Earlier, Waterson’s lawyer Tana Adkin QC suggested Waterson’s chair had nothing to do with Alfie’s injuries, saying Hoare must have ‘done something’. 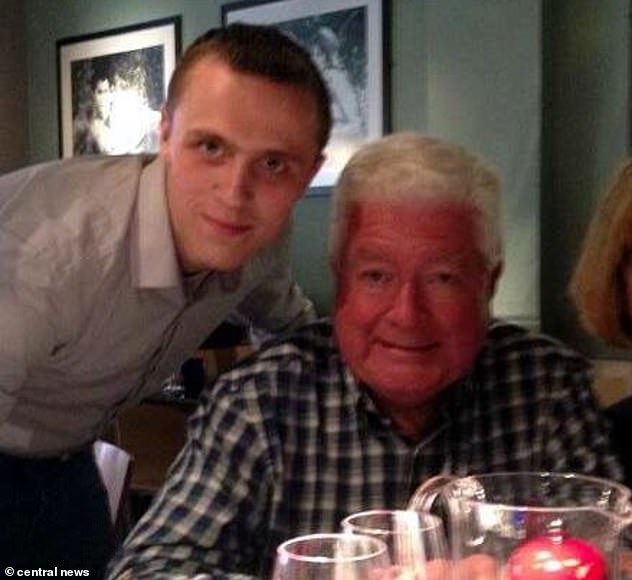 Waterson is the adoptive son of former Tory minister Nigel Waterson (pictured together). He is claimed to have told people he had ‘powerful parents’ 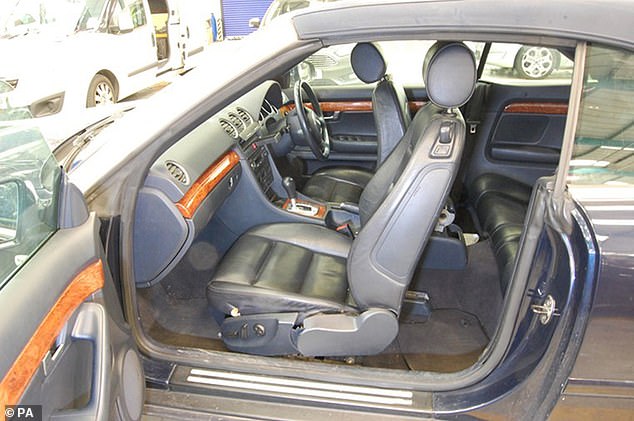 Waterson is accused of ramming his seat into Alfie, crushing him and causing fatal injuries

She asked Hoare: ‘Are you trying to cover up something you did in the back of the car, and now trying to say it was Stephen that moved the seat and you knew what happened?’

The defendant replied: ‘No.’

Hoare, who is originally from Gravesend in Kent, denies manslaughter, child cruelty and common assault on Emilie Williams, who was in the car.

Waterson has pleaded not guilty to manslaughter and intimidation of the driver Marcus Lamb.

The couple and Williams have pleaded guilty to conspiring to pervert the course of justice by making false statements to police.