Algerian pervert, 41, who molested female bus passengers is jailed for his fake passport

Abdi Wahab Ikken, 41, of Dartford, received a 25-week prison sentence for unemployment fraud and bogus passport charges. He is seen in an undated photo outside Camberwell Green Magistrates Court

A pervert who molested two female bus passengers has been jailed for using a forged French passport to land a cleaning job at a London council.

Abdi Wahab Ikken, 41, of Dartford, even used a stolen Oyster card to make the journeys in south-east London, where he worked for Southwark Council.

He was found guilty of sexually assaulting a 17 year-old on a number 96 bus in Woolwich on August 28 last year and a second young woman on number 53 on September 25.

But the Algerian received his 25-week prison sentence for unemployment fraud and passport charges, having received probation for the sexual assaults.

He also admitted to fraud by false representation to dishonestly make a gain, namely employment with the council between October 1 and December 24, last year.

He was also convicted at Croydon Magistrates Court of stealing an Oyster card with £55 credit between July 1 and July 31 last year.

During that earlier court hearing Ikken was sentenced to a two-year Community Order, which includes ten days of sex offenders’ rehabilitation.

He was also ordered to sign the Sex Offenders Register for five years and was ordered to pay an £85 victim surcharge.

That Community Order has now been revoked because of the prison sentence.

A police appeal for the sexual assault offences led investigators to Ikken’s address.

When officers from the Roads and Transport Policing Command raided his home they seized the distinctive shorts Ikken was wearing during the first assault and the Oyster card he used to tap-in both times.

He boarded the 96 bus outside Dartford Magistrates Court at 6.30pm and the teenager, who had been shopping in Bluewater, told the trial: ‘He was squished up against me and his leg was touching mine.

‘I could feel the hairs of his leg on me. It just carried on until his leg stopped and he then used his hands,’ said the teenager, who was wearing a summer dress.

‘He put his elbow on my hip and pushed down really hard. It hurt, I felt he was trying to hurt me.’

The teenager, who Ikken sat next to despite other seats being available added: ‘It then started with his fingers feeling my leg at the side of my thigh on my skin. I wasn’t wearing any tights.

‘I was in disbelief at first. As I looked down he moved his hand around my thigh. I said: ‘You’re disgusting. Why are you trying to touch me on the bus?’ 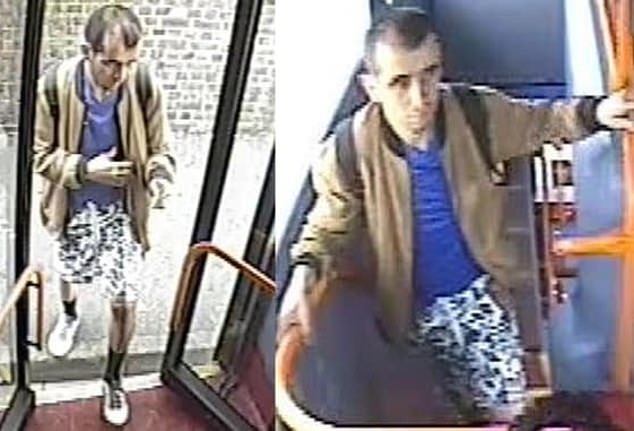 A second woman, in her twenties, was travelling towards Whitehall at 1.30pm when Ikken deliberately plonked himself next to her despite others seats being available.

‘He immediately spread his legs so his right leg was touching my left leg. It felt uncomfortable.

‘I felt it next to my thigh and the rest of my leg. He apologised, but then spread his legs again and I asked him to move.

‘He spread his legs a third time and I felt his ankle move against mine very slowly. I felt it was deliberate rubbing against my skin.’

The woman said she told Ikken to keep his legs to himself.

‘He said he did not want to because I was so beautiful and I told him: “That’s really creepy, get away from me”, she said.

‘He was grinning in what I’d say was a lecherous way.

‘This was a person who knew how to sexually assault someone without it being shown on camera and it made me think he’d probably done it before.

‘He spoke like he was very pleased with what he had done. I’ve been sexually assaulted before and this brought it back to me.’

When questioned by police Southwark Council Ikken, who needed an Arabic interpreter throughout the trial, simply said: ‘It wasn’t me,’ and refused to answer any other questions.