Alicia Keys enjoyed the fruits of her labor as she chilled out on a superyacht with husband Swizz Beatz in the South of France on Monday.

The 40-year-old singer donned a very colorful wetsuit for a day of water sports which included a few trips down the luxury vessel’s inflatable slide and some jet skiing.

She and her hunky husband of 11 years, 42, were seen letting loose with their kids and sharing a sweet smooch on the deck off the coast of Cote D’Azur.

All aboard! Alicia Keys, 40, enjoys a day on a luxury superyacht in the South of France with husband Swizz Beatz

The New York crooner was aptly dressed for the day as she wore an intergalactic wetsuit that hugged her curves in all the right places.

She later was seen slipping it down to her waist to reveal an orange sports bra as she snapped some photos on the deck.

Her producer husband was shirtless in pink swim trunks and shielded his face with a bucket hat while unwinding with a cocktail in hand.

Eager to get in the water, the R&B singer was seen traversing across a floating walkway to get to a jet ski. 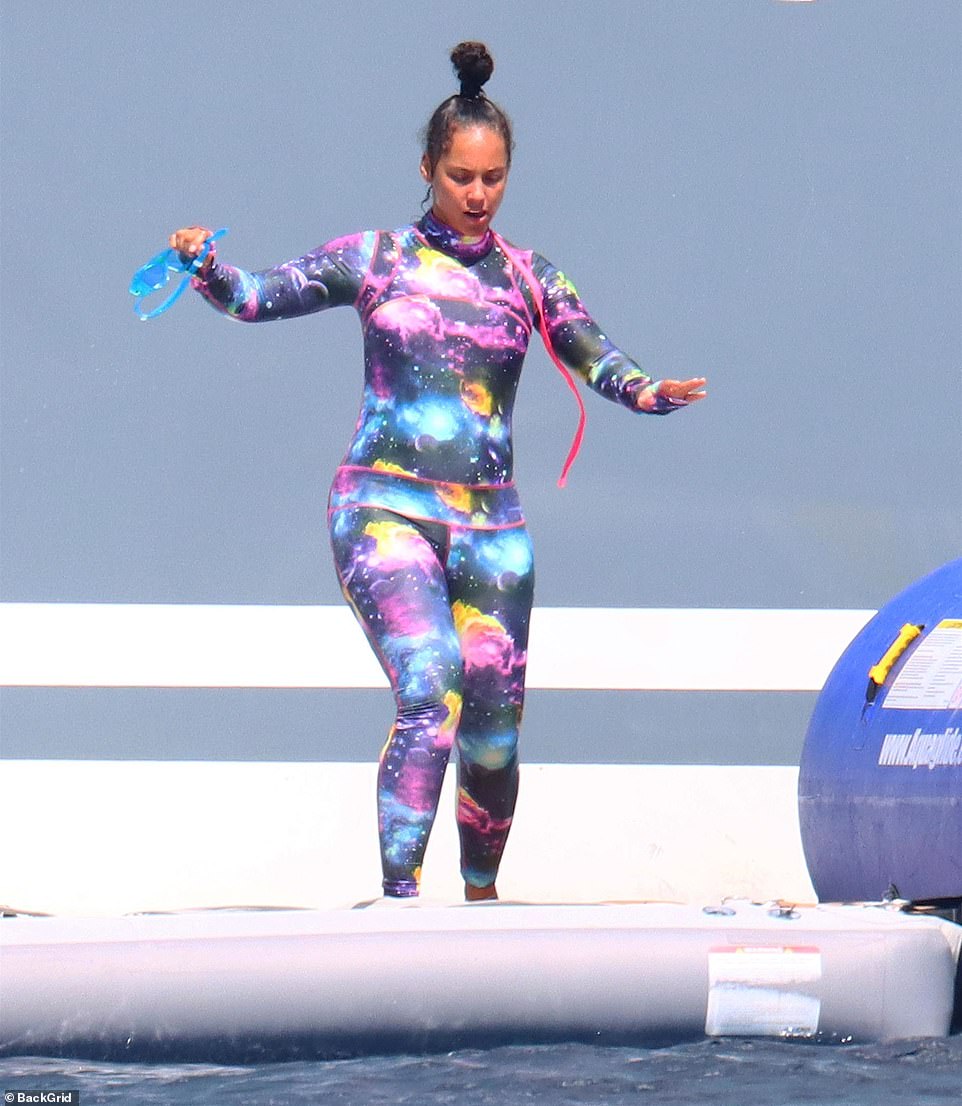 Out of this world: The R&B singer wore an intergalactic wetsuit as she enjoyed a day of water sports in Cote D’Azur

Balancing act: She was seen trying to get her balance as she traversed across a floating walkway 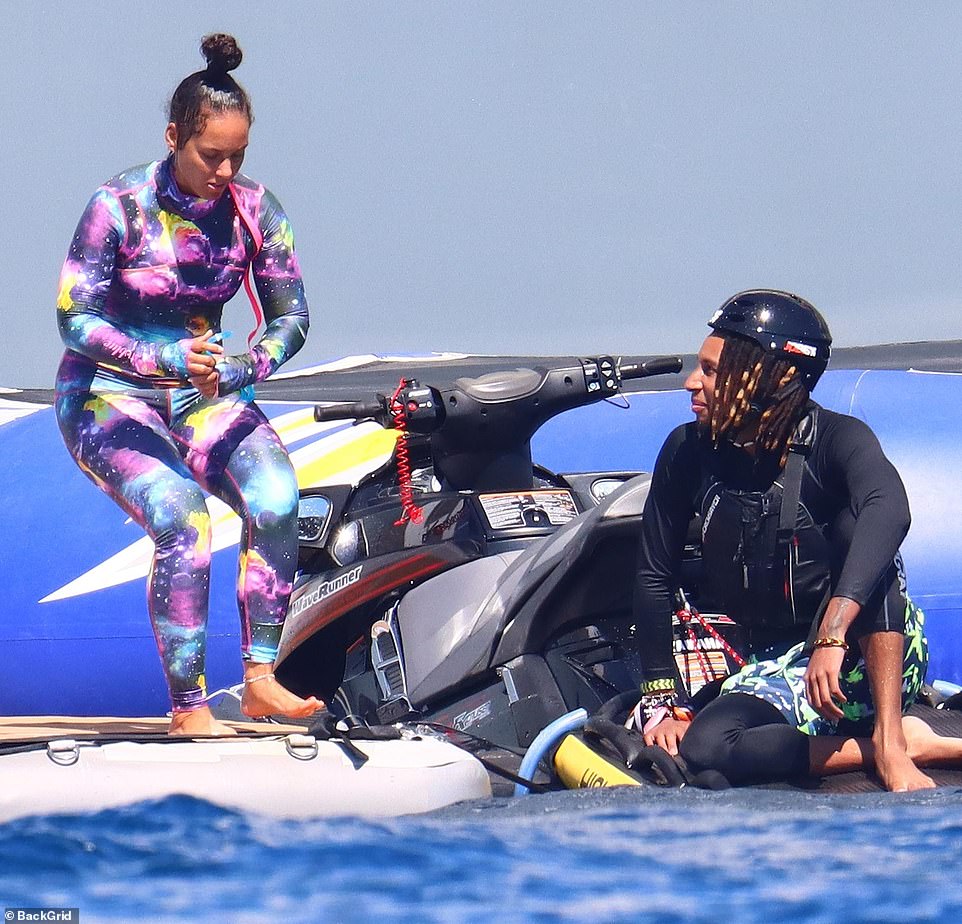 Easing in: She gently plunged into the water while affixing goggles over her eyes 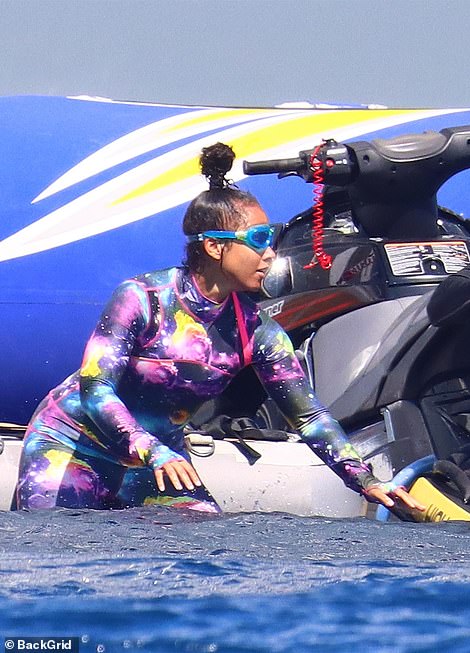 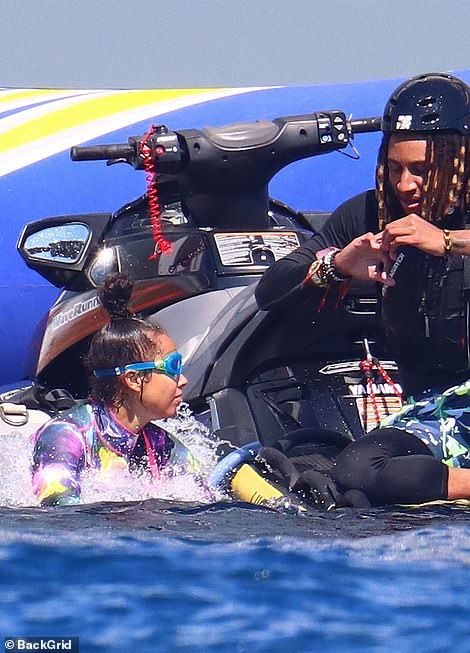 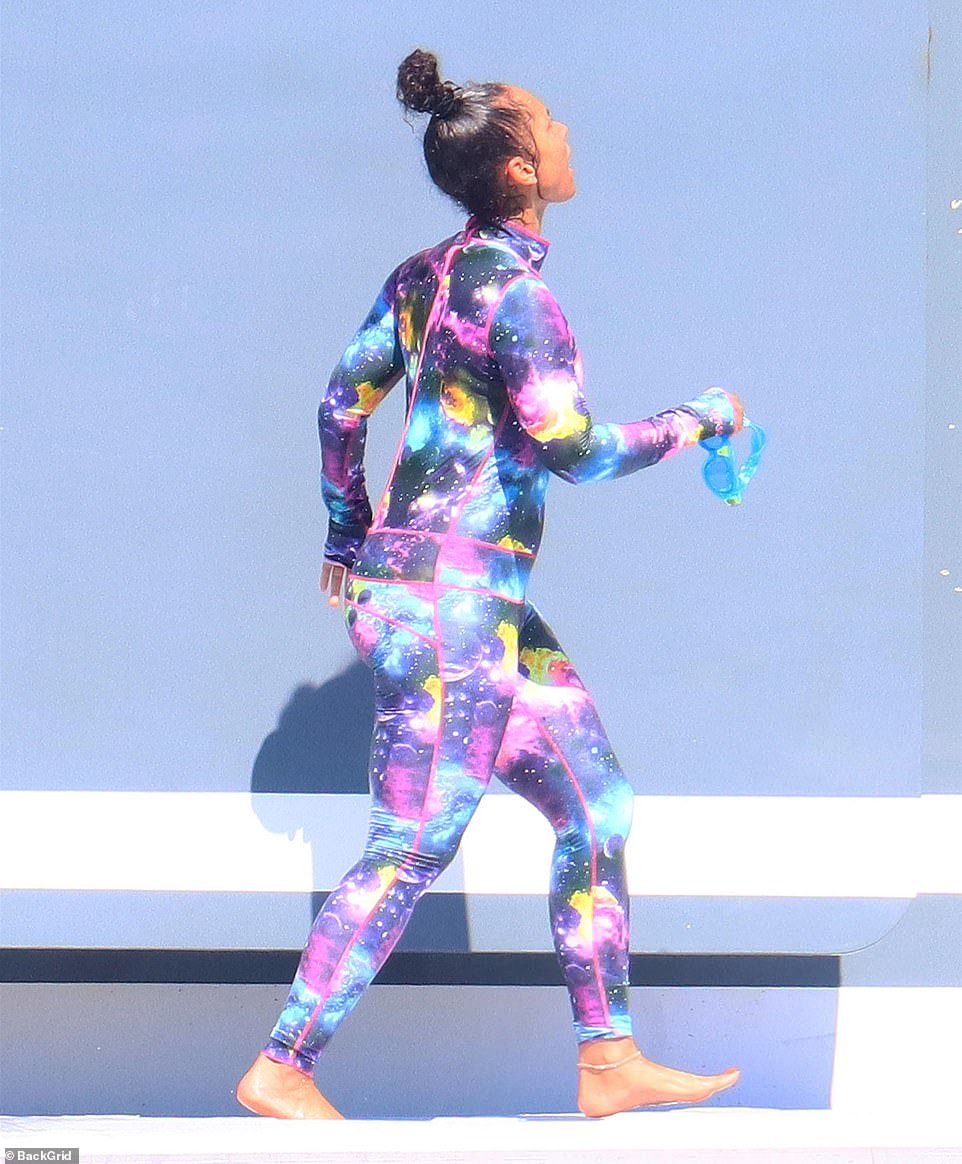 Easy to spot: The colorful wetsuit was a fun and fashionable look for the water

Her brown hair was tied up in a top knot to minimize any fuss and she clasped a pair of goggles in hand.

She eased herself into the ocean before chatting to what looked to be Swizz’ son Prince, 20,  who was stationed by the electric water cruiser.

And after a bit she was then seen heading back up to the enormous deck where she and Swizz shared a kiss and chilled out for a bit.

They made sure to document every inch of their luxurious vacation as Alicia snapped away on her phone. 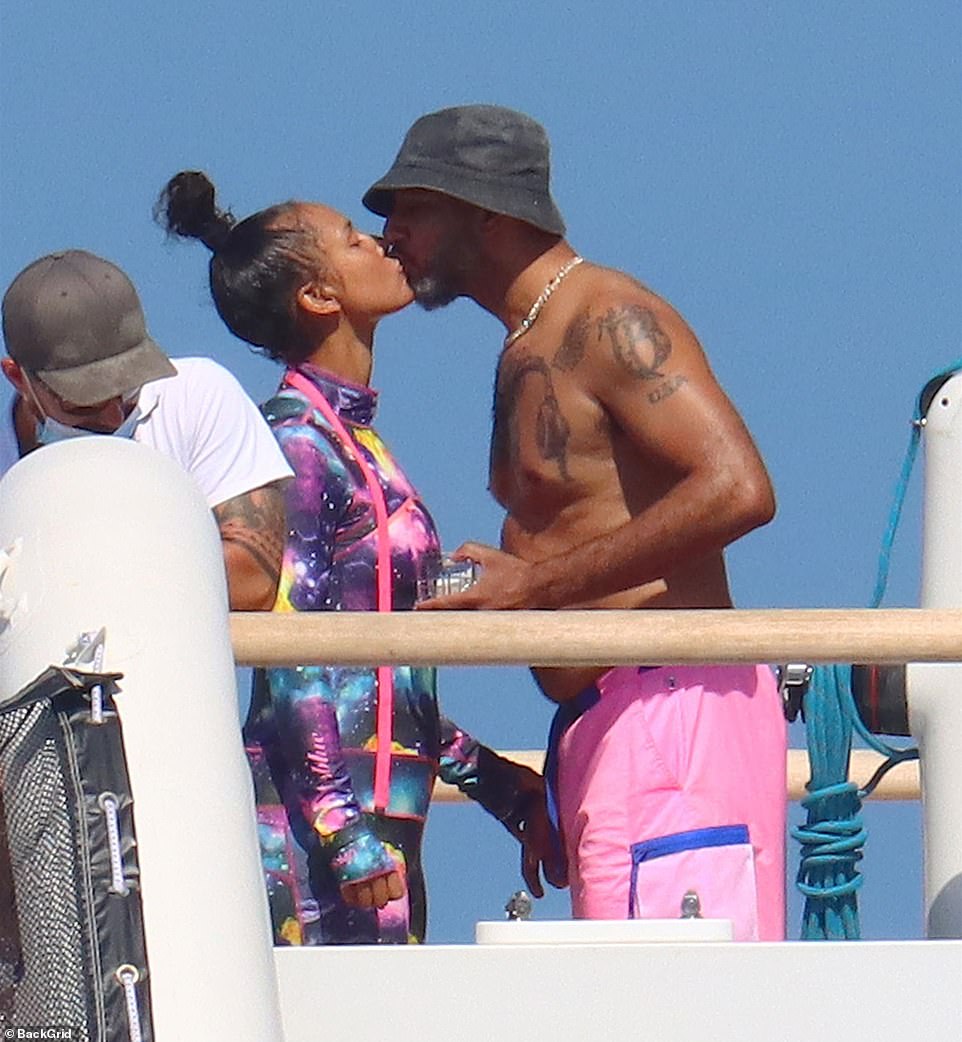 Smooches: The couple of 11 years shared a smooch on the deck 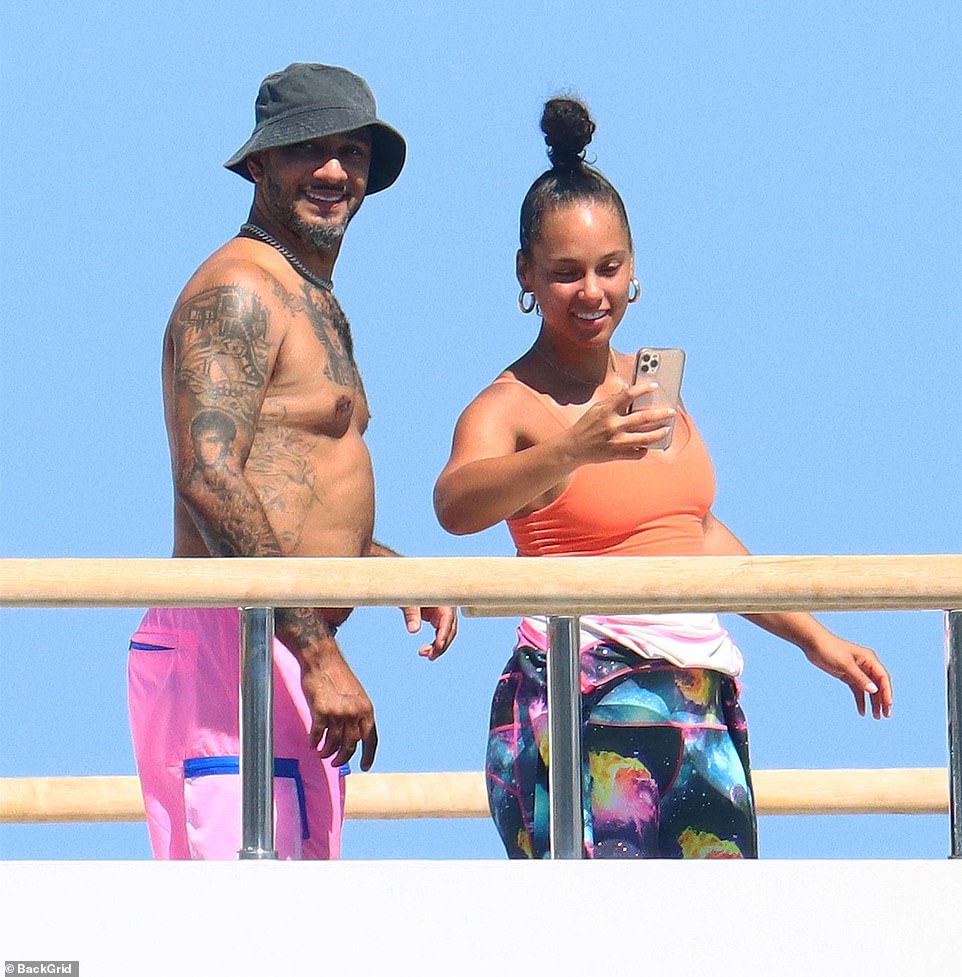 Blissful: The musical couple made sure to take footage of their picturesque getaway 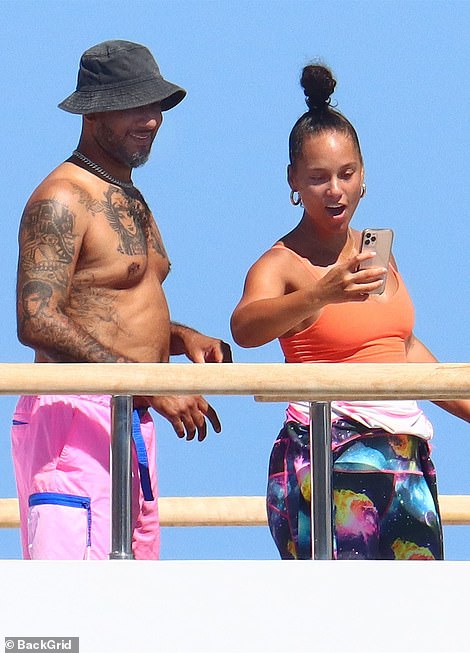 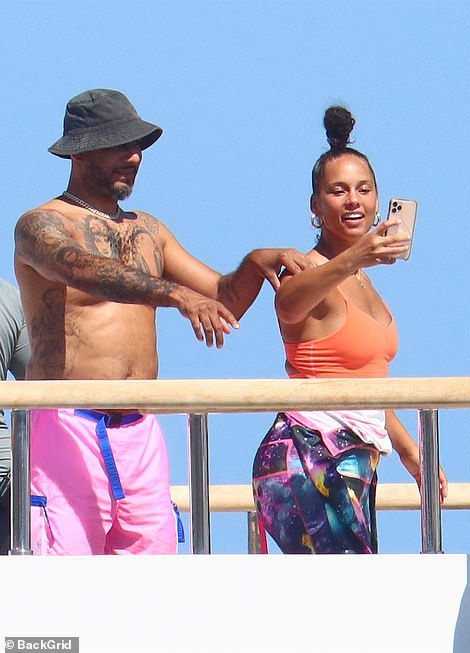 Getting the shot: Swizz was seen motioning to his wife as she snapped away 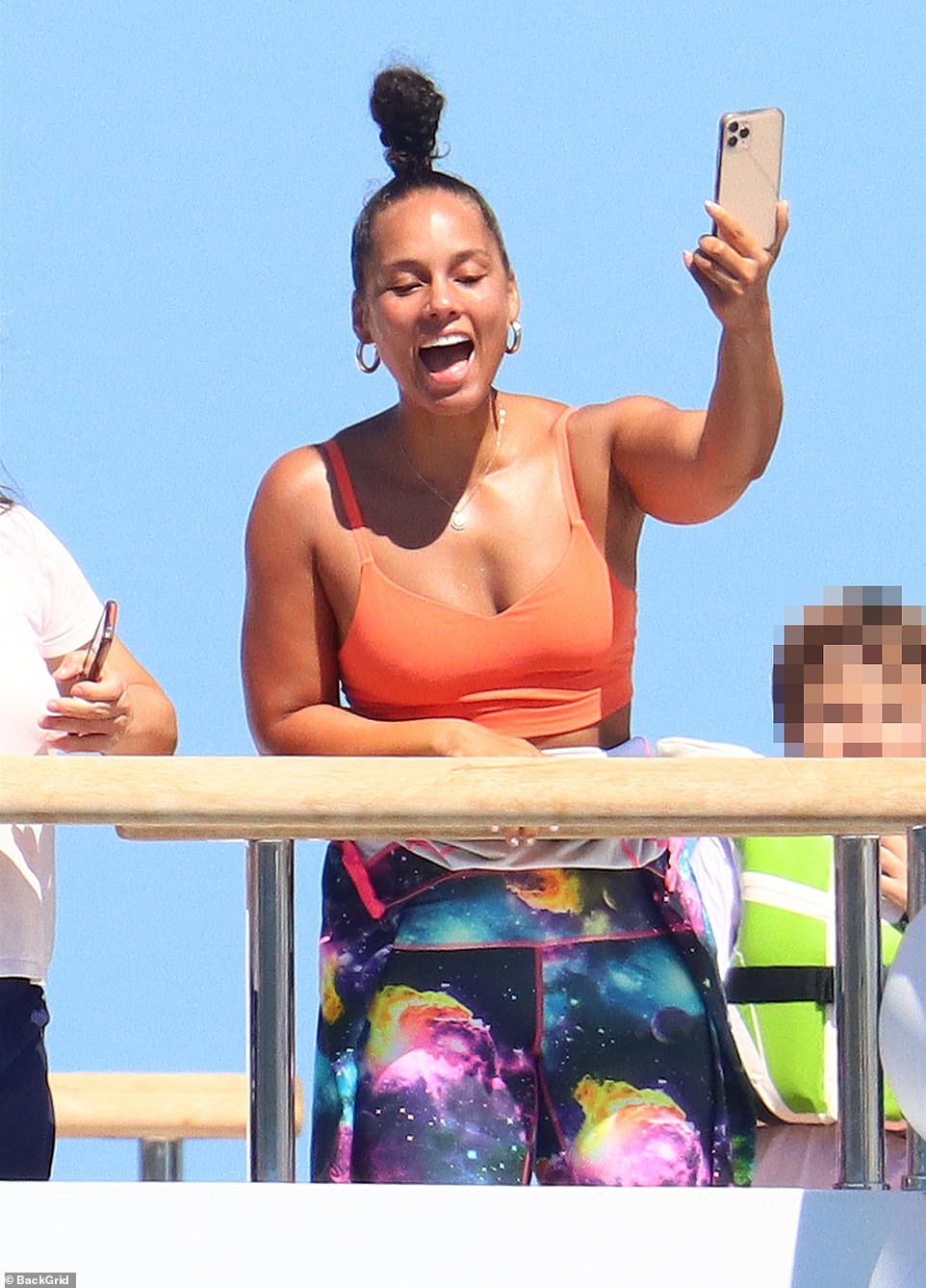 Glowing: Her face was free of makeup and she sported hoop earrings while grinning big 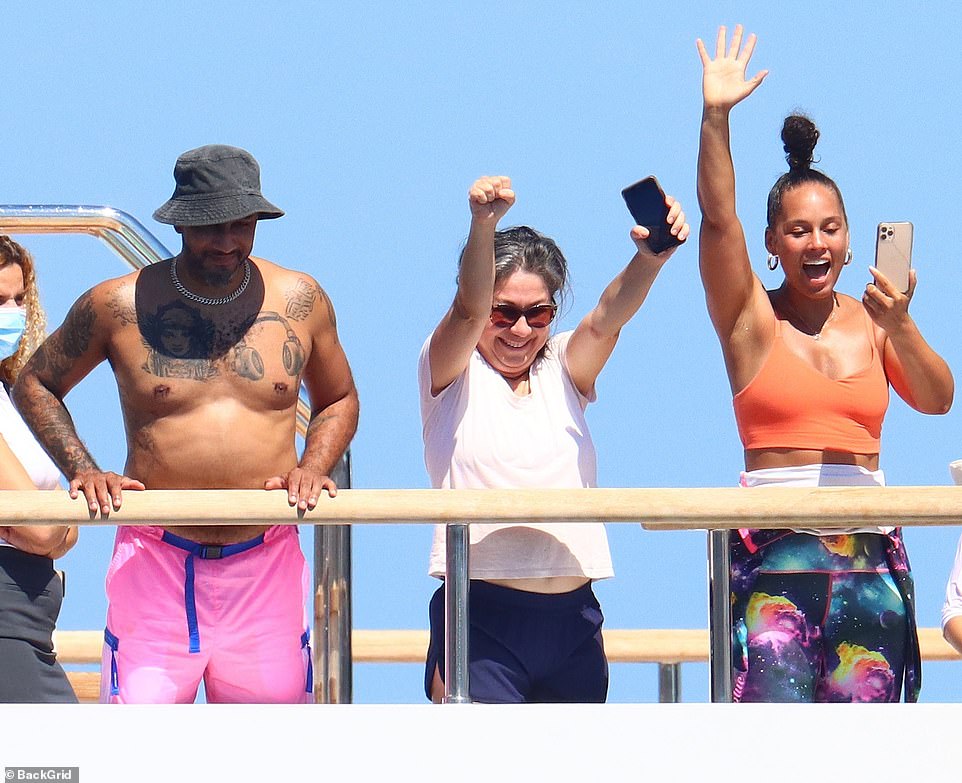 Stadium cheers: Alicia looked to be cheering on one of her kids in the water 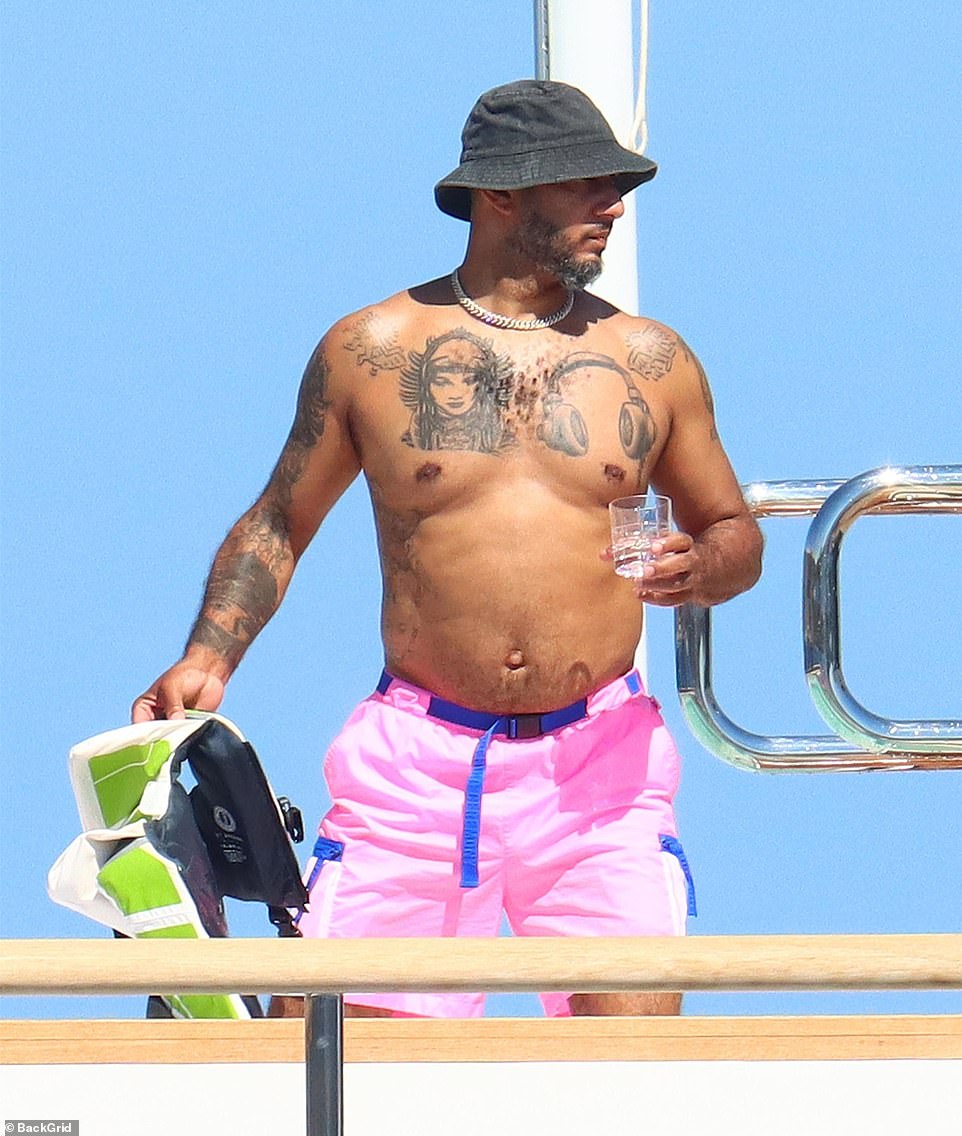 Vacation mode: The producer showed off his buff physique in pink swim trunks and clutched a cocktail

The pair looked relaxed as they showed off bronzed physiques from the European sun.

Later Swizz was seen getting into the water to do a little jetskiing of his own while Alicia slid down a water slide with a big grin plastered on her face.

Bracing for impact she kept her hands at her chest while gritting her teeth before plummeting into the water.

She got a bit of air as she stretched her body out before hitting the ocean and holding her breath as to not get water in her mouth. 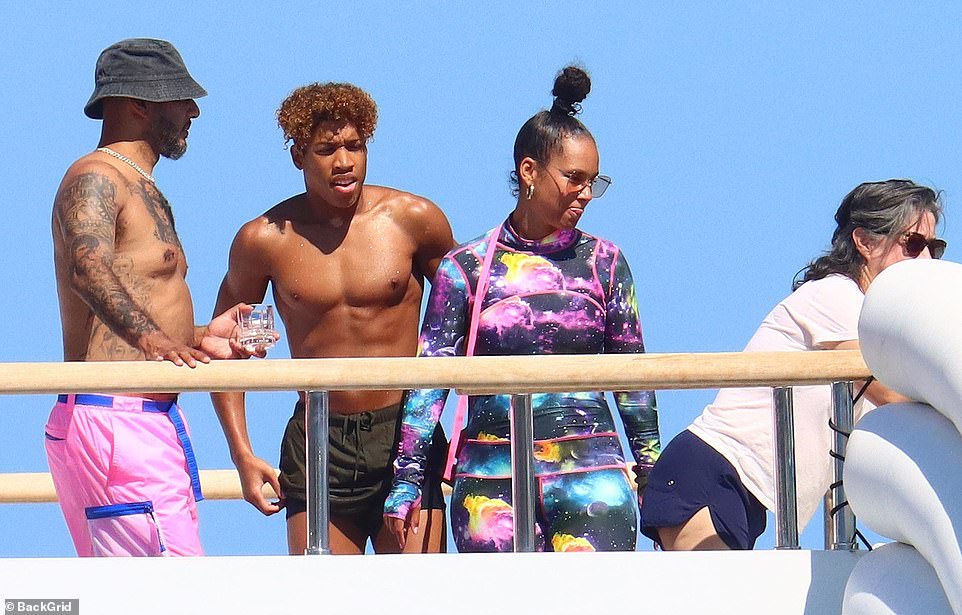 Getting ready: The couple were seen with what looked to be Swizz’ 14-year-old son 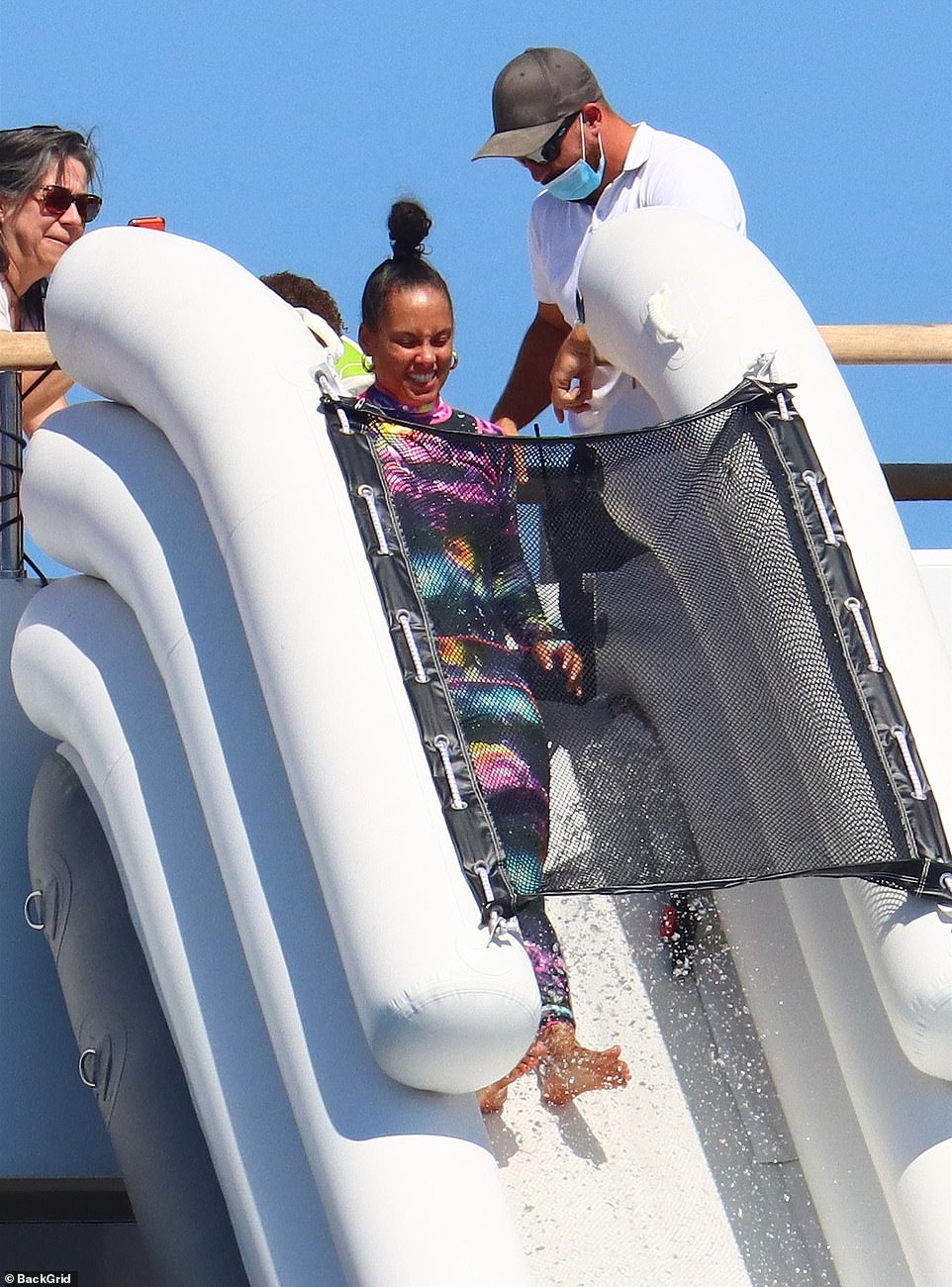 Going in: The singer braved a large inflatable water slide

Tucked in: She was seen resting her hands on her chest while bracing for impact 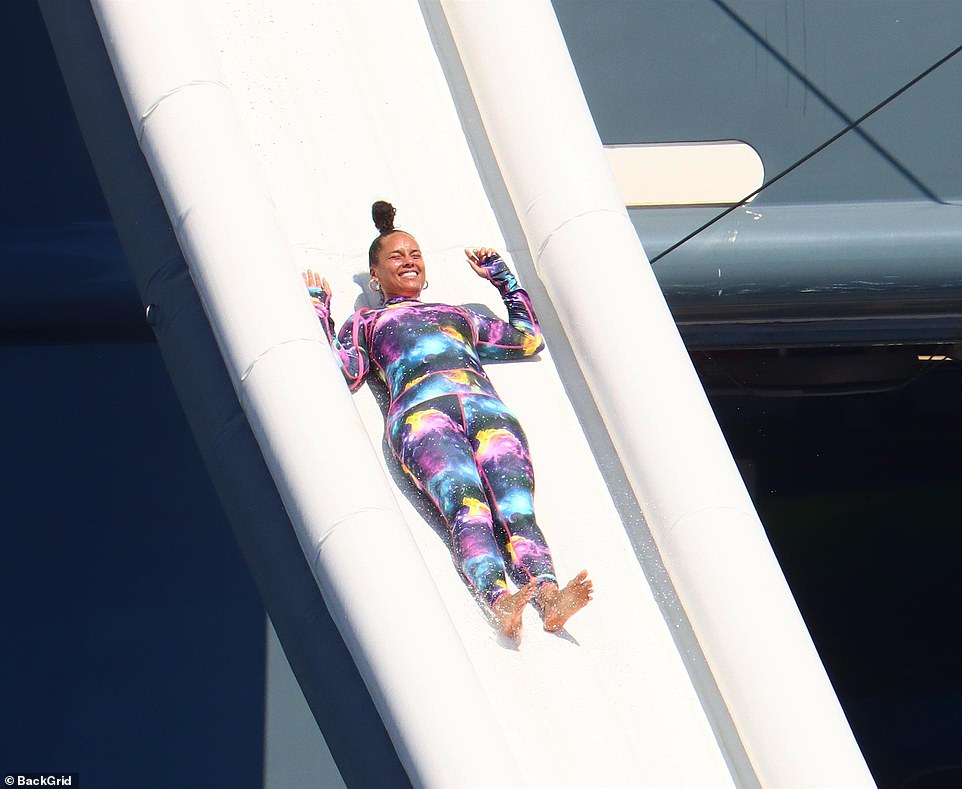 Amenities: Naturally the superyacht came complete with every water-related amenity 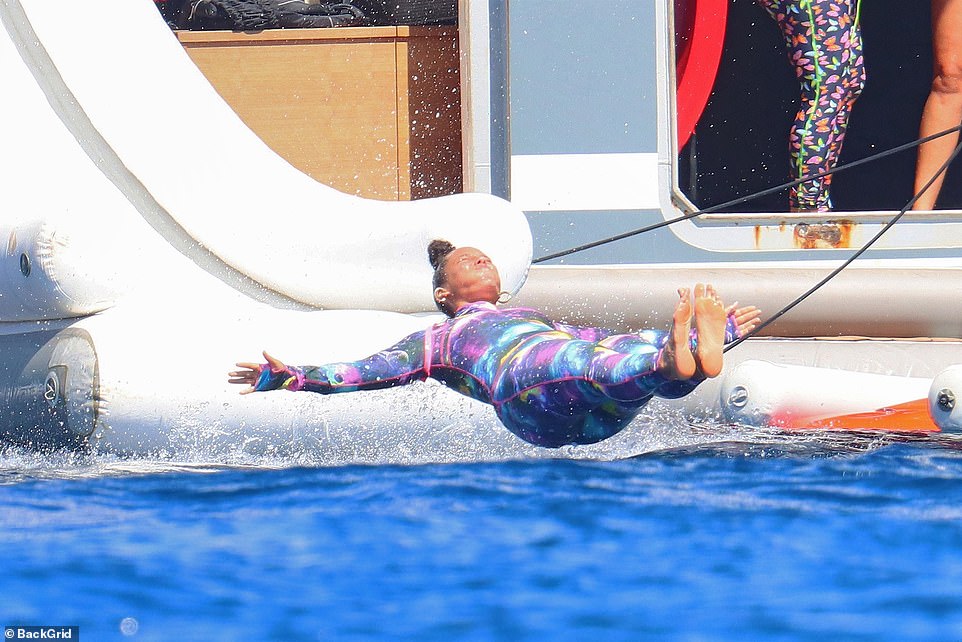 There she goes! For a moment she levitated in the air before hitting the ocean

The Grammy-winning songwriter looked every bit the child at heart as she enjoyed the incredible experience.

The couple also were joined by Swizz’ eldest sons Prince Nasir, 20, and Kasseem, 14 from his exes Mashonda and Nicole Levy.

It could be assumed that his daughter Nicole, 13, he and Keys’ two sons: son Egypt, 10, and Genesis, six, were also present.

The couple took a trip to Europe for both vacation and to mark their 11th anniversary. 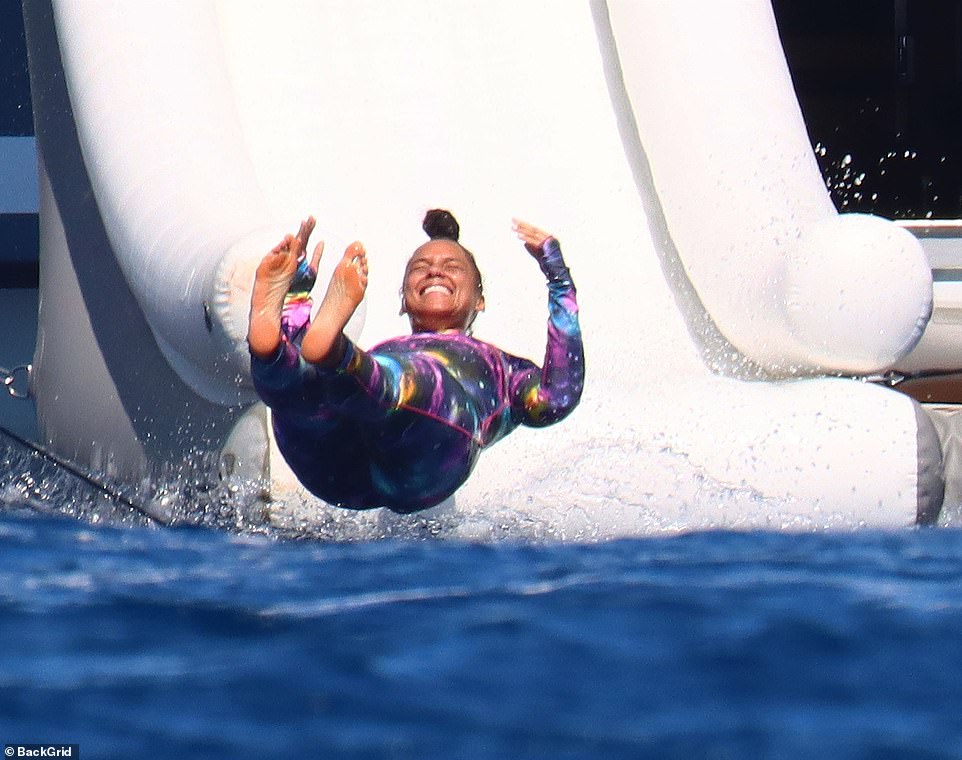 Getting air: After holding her breath to ensure no water in her mouth or nose she relaxed with a smile 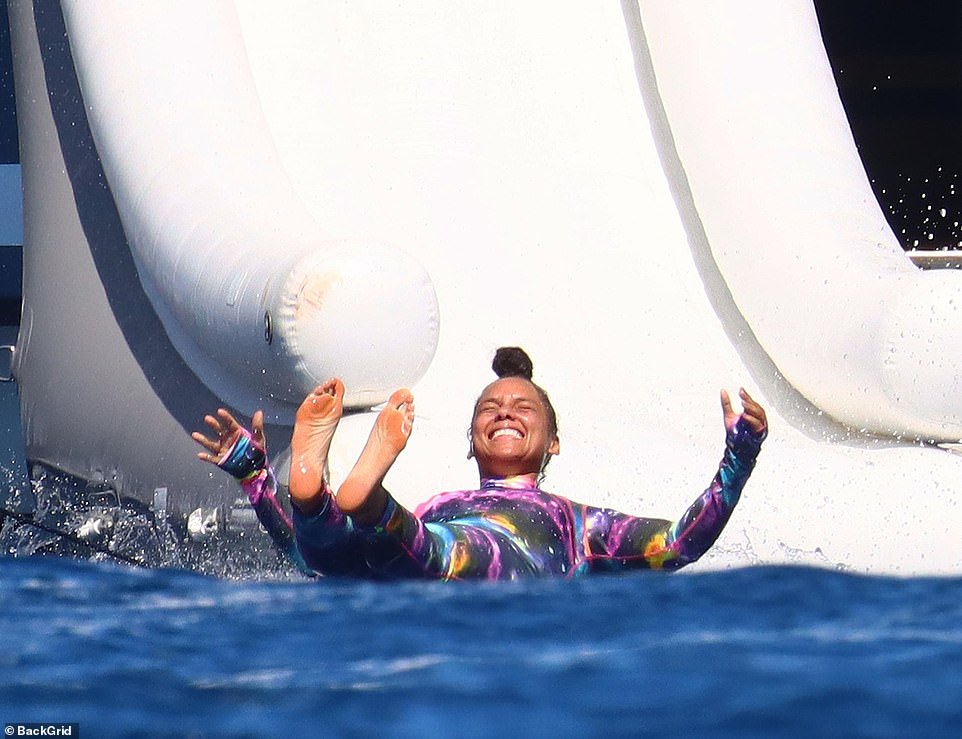 Having a blast: Alicia could not contain her smile 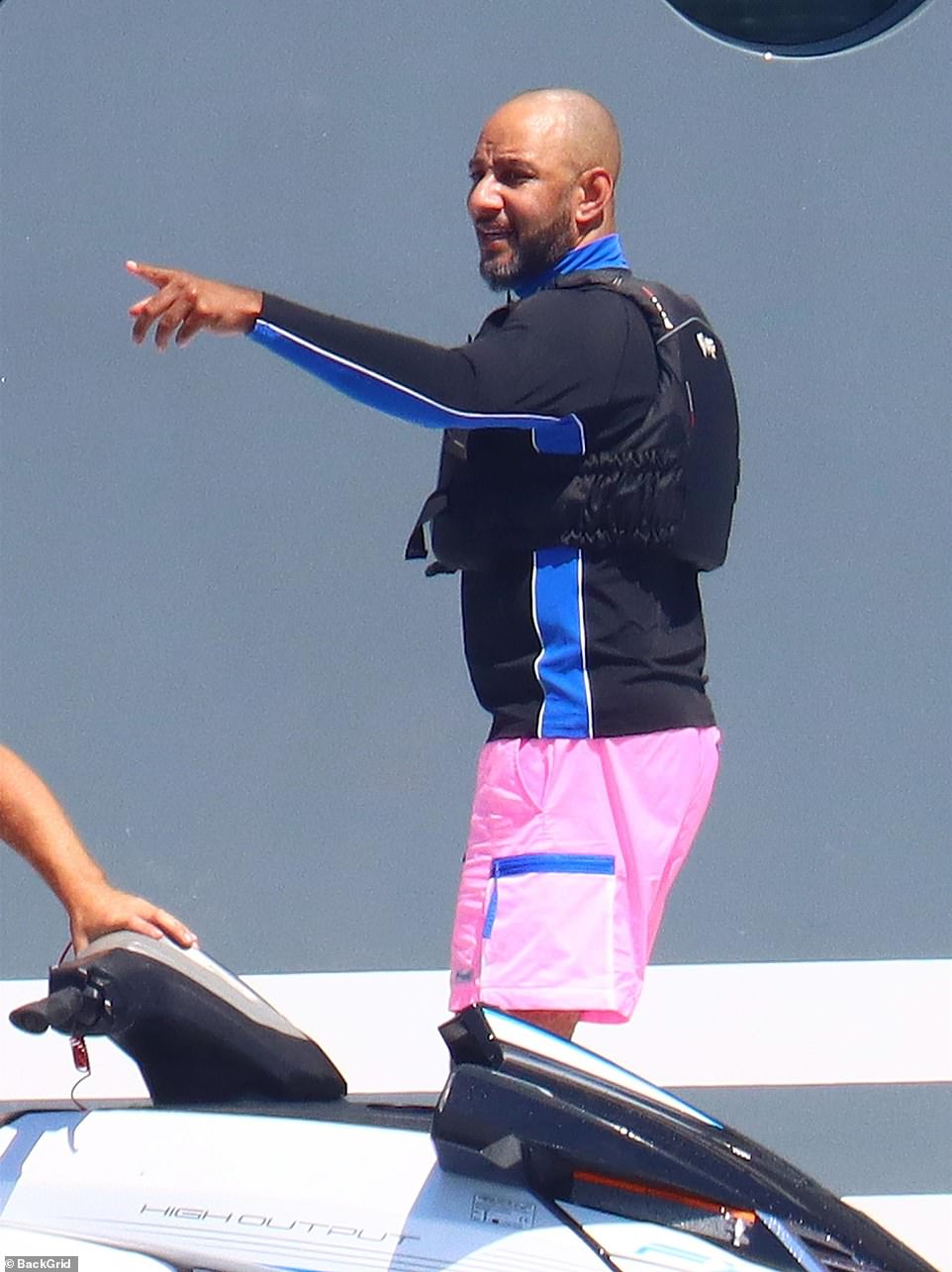 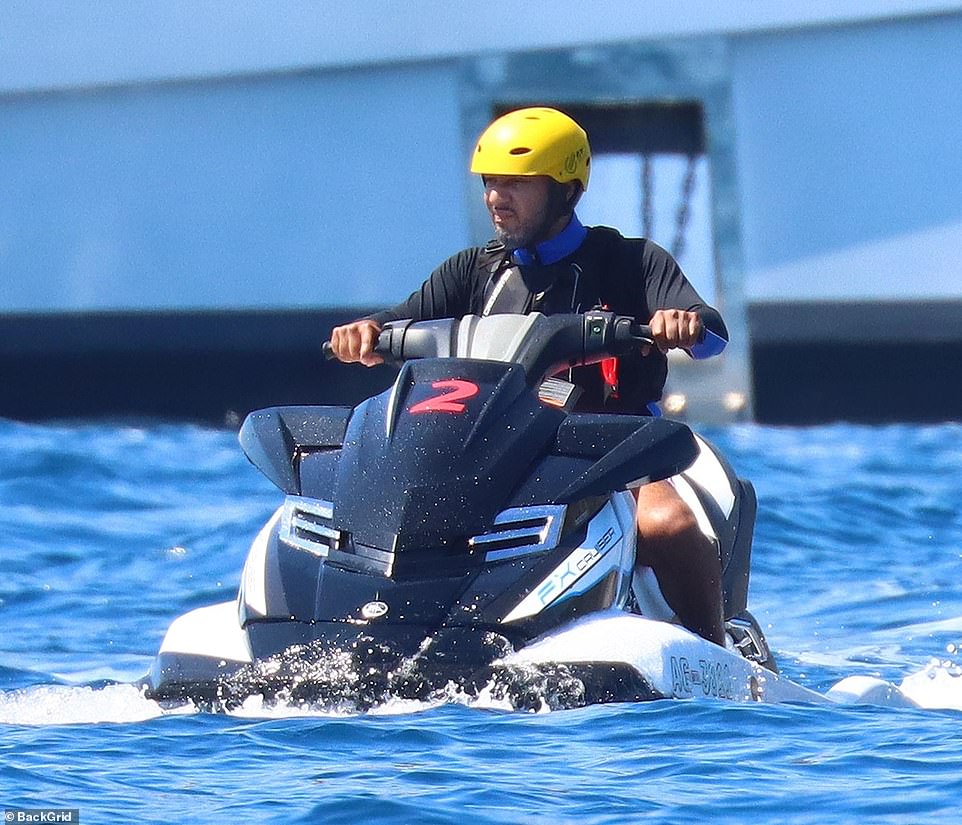 Speed demon: He was suited up in a life jacket and helmet 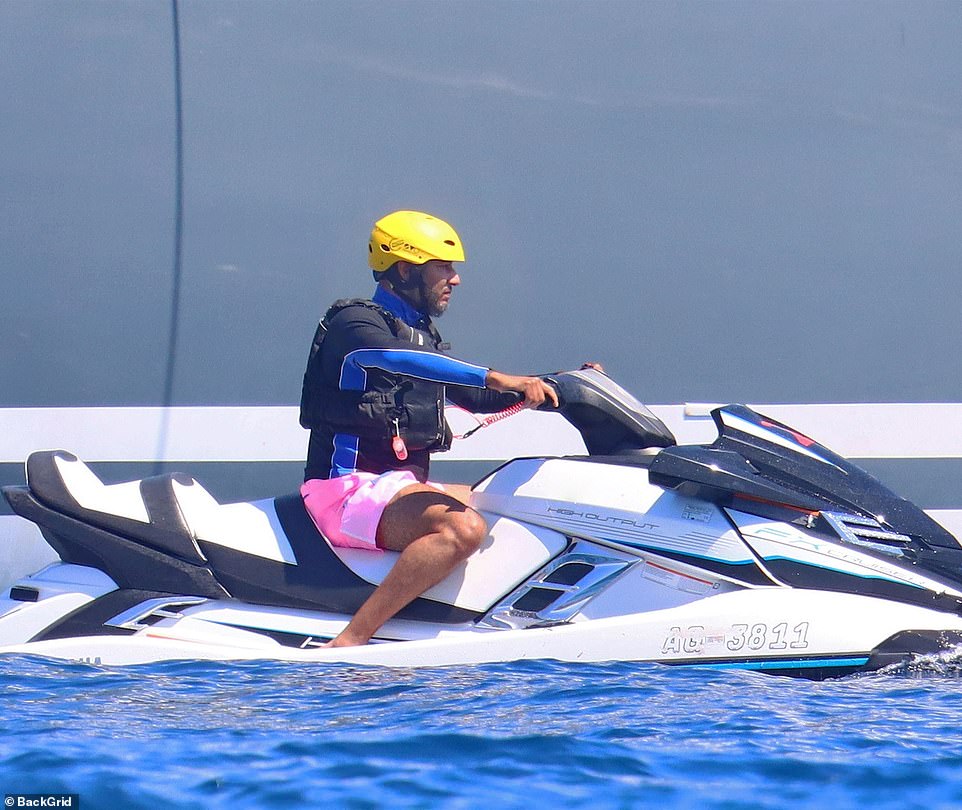 There he goes: Beatz looked a natural on the jet ski

On July 31, the soulful singer penned a gushing tribute to Swizz where she called him her ‘twin flame.’

‘Soulmates, Deeper then soulmates, Twin flames, An existential earthquake, My souls mirror, All these are good but still not strong enough to describe our precious, precious love!! Happy anniversary my love! Woooooooowwwwwwww it’s just getting better!! I celebrate, honor and deeply respect us!! Here’s to many many many many more!!!!!’

The pair first met as teenagers in the nineties but she was not into him romantically at first and her career was just taking off.

In her autobiography More Me she wrote about her thoughts on him before they began a relationship. 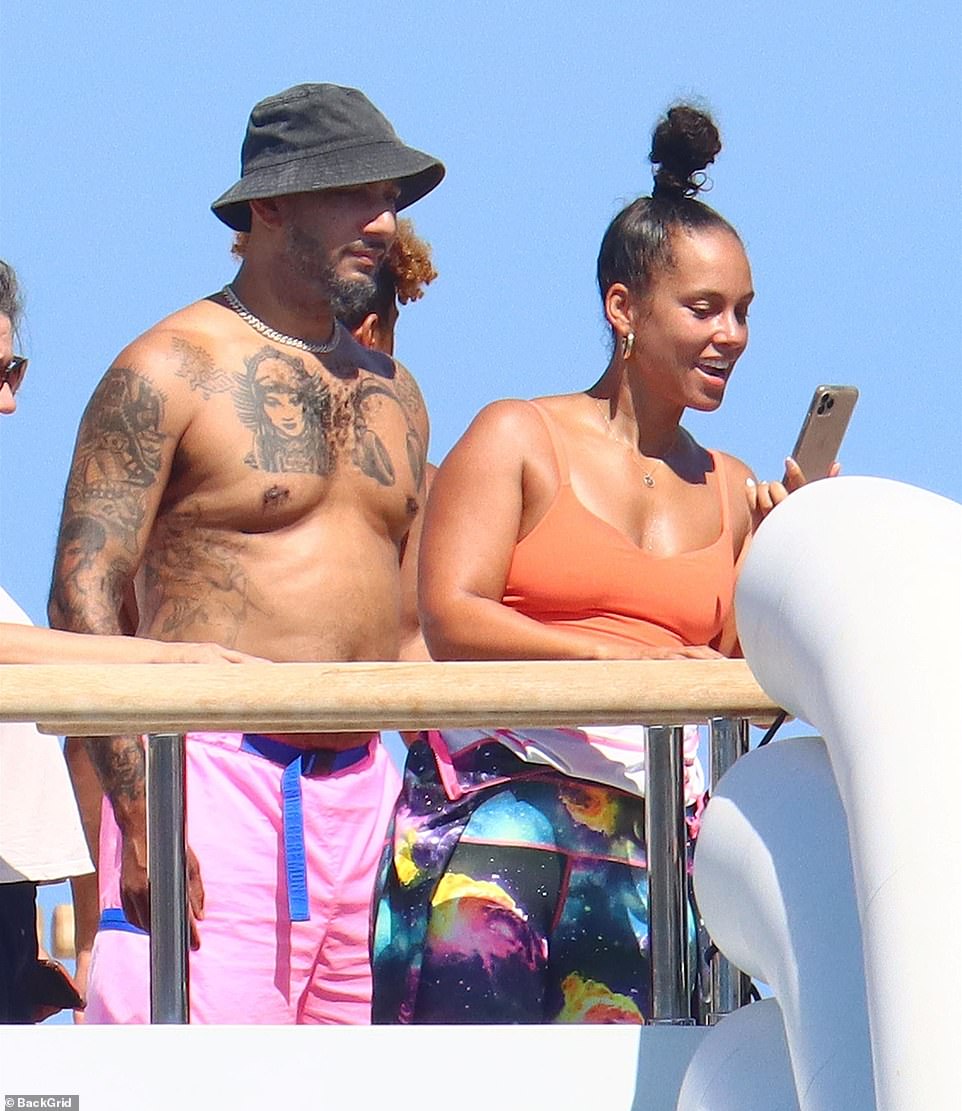 Making memories: The vacation was both for summer and also to celebrate their 11th wedding anniversary 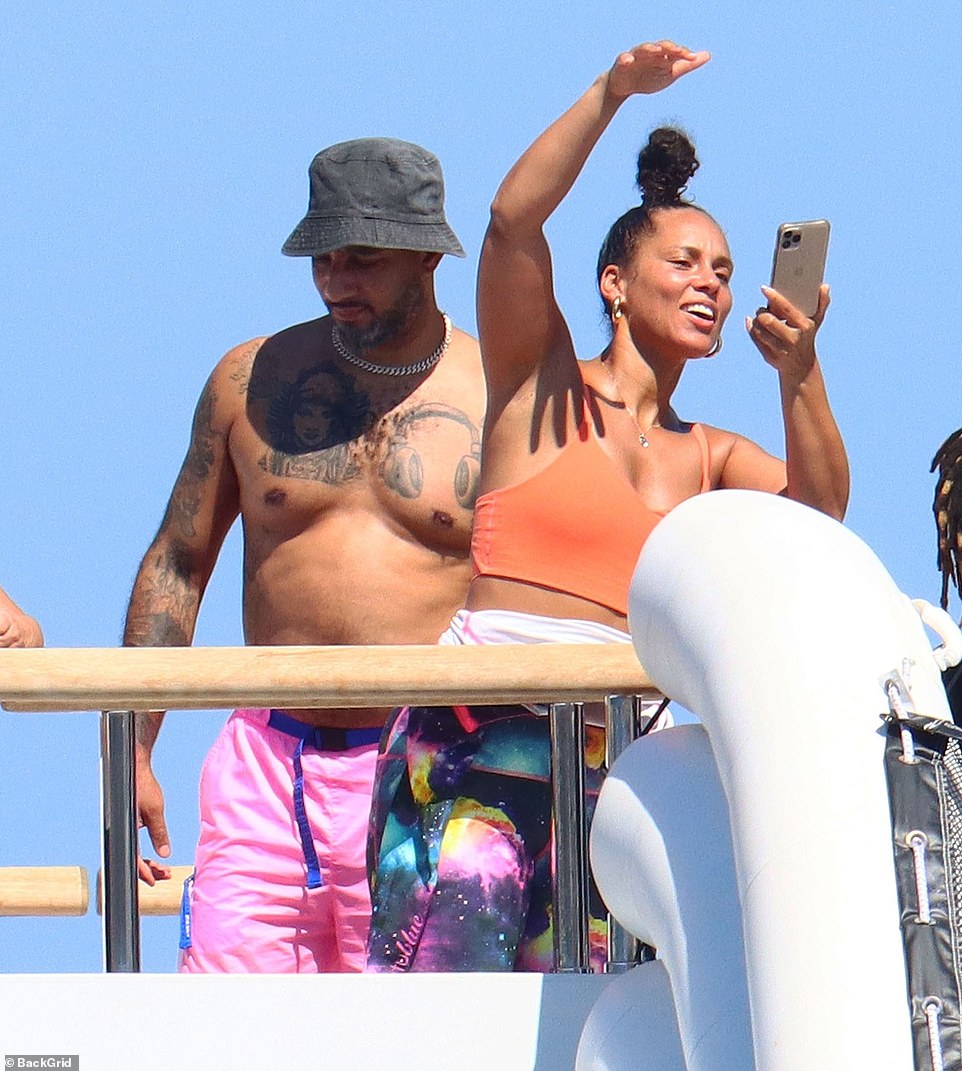 Hyped up: She looked every bit the proud parent 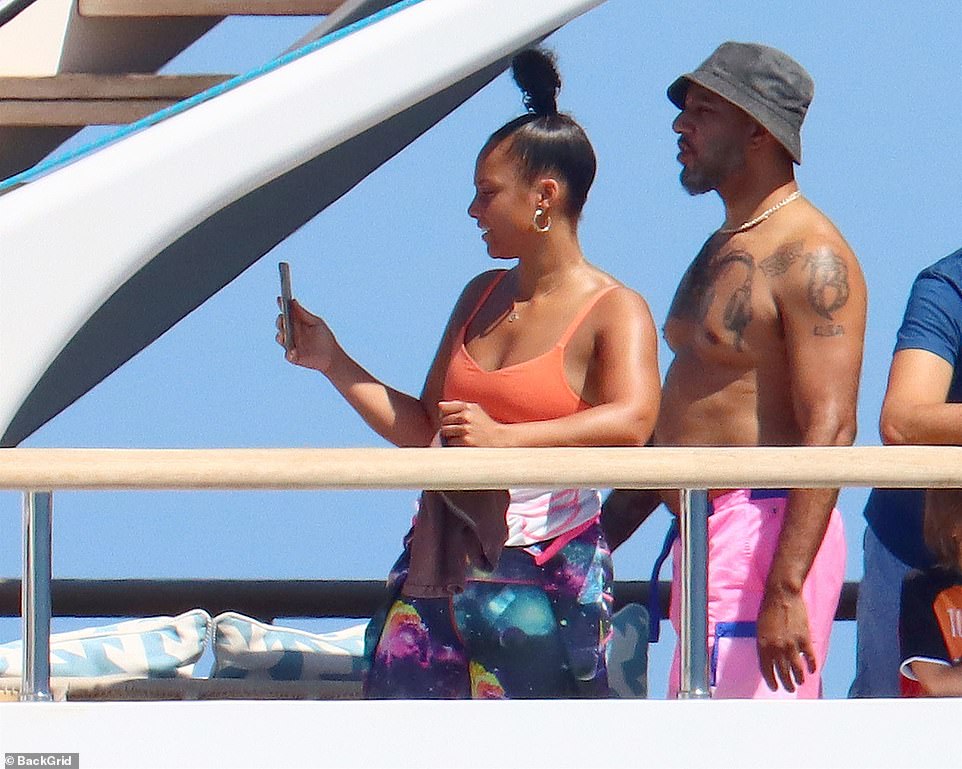 Twin flame: ‘Soulmates, Deeper then soulmates, Twin flames, An existential earthquake, My souls mirror, All these are good but still not strong enough to describe our precious, precious love!!,’ she wrote on their anniversary

‘We ended up in the same circles at various awards shows and industry events. ‘He’d usually pull up in some fancy car, rolling deep with his Bronx crew and shining with diamonds. I wanted nothing to do with that scene or with Swizz.’

As they continued to work together musically their bond grew stronger.  ‘The more we talked the more I noticed how his mind worked. Beyond the baggy jeans and arm tats there was depth. He was so aware of what was happening around the world.’

They made plans to have a lunch date and though he arrived 20 minutes late, which irked her, she revealed ‘he lifted the mood with a steady stream of humor and fascinating conversation.’

The couple began dating in 2008 and he proposed to her in 2010. He whisked her away on a trip to Hawaii where she got pregnant with their son Egypt and they married that summer in Corsica. 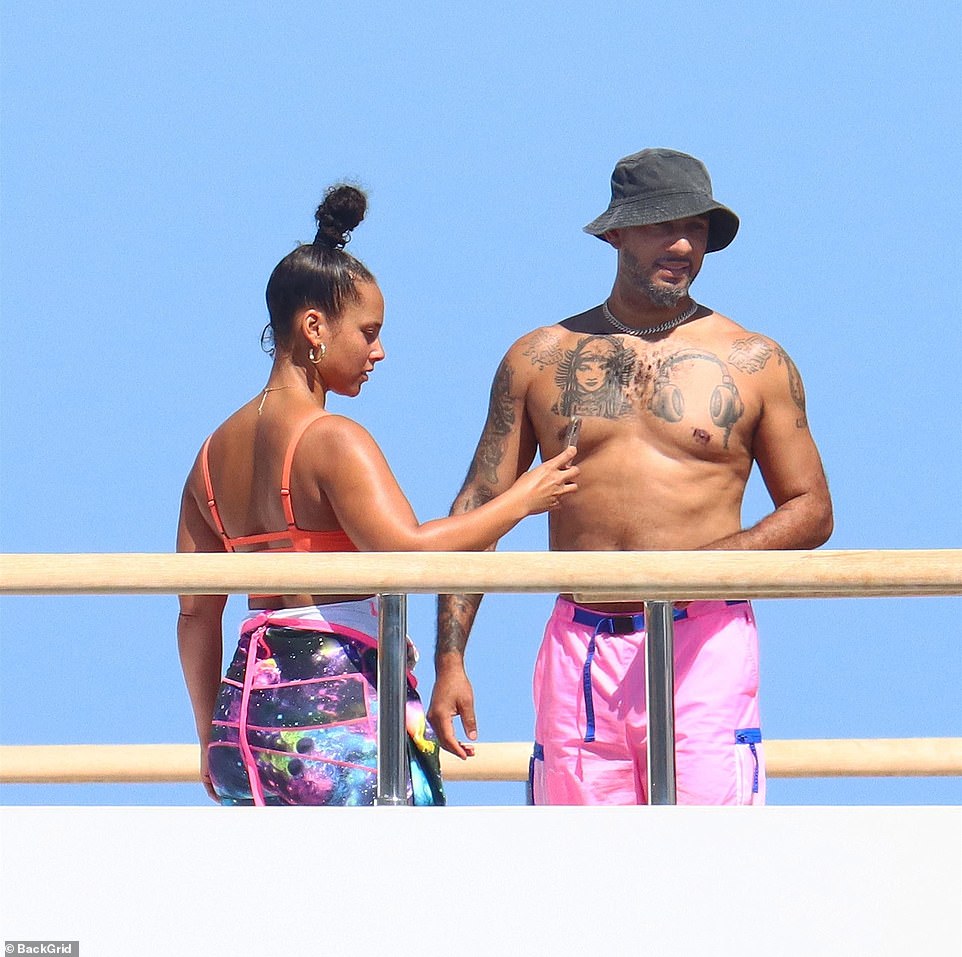 Not interested: ‘He’d usually pull up in some fancy car, rolling deep with his Bronx crew and shining with diamonds. I wanted nothing to do with that scene or with Swizz,’ she wrote of her first impression 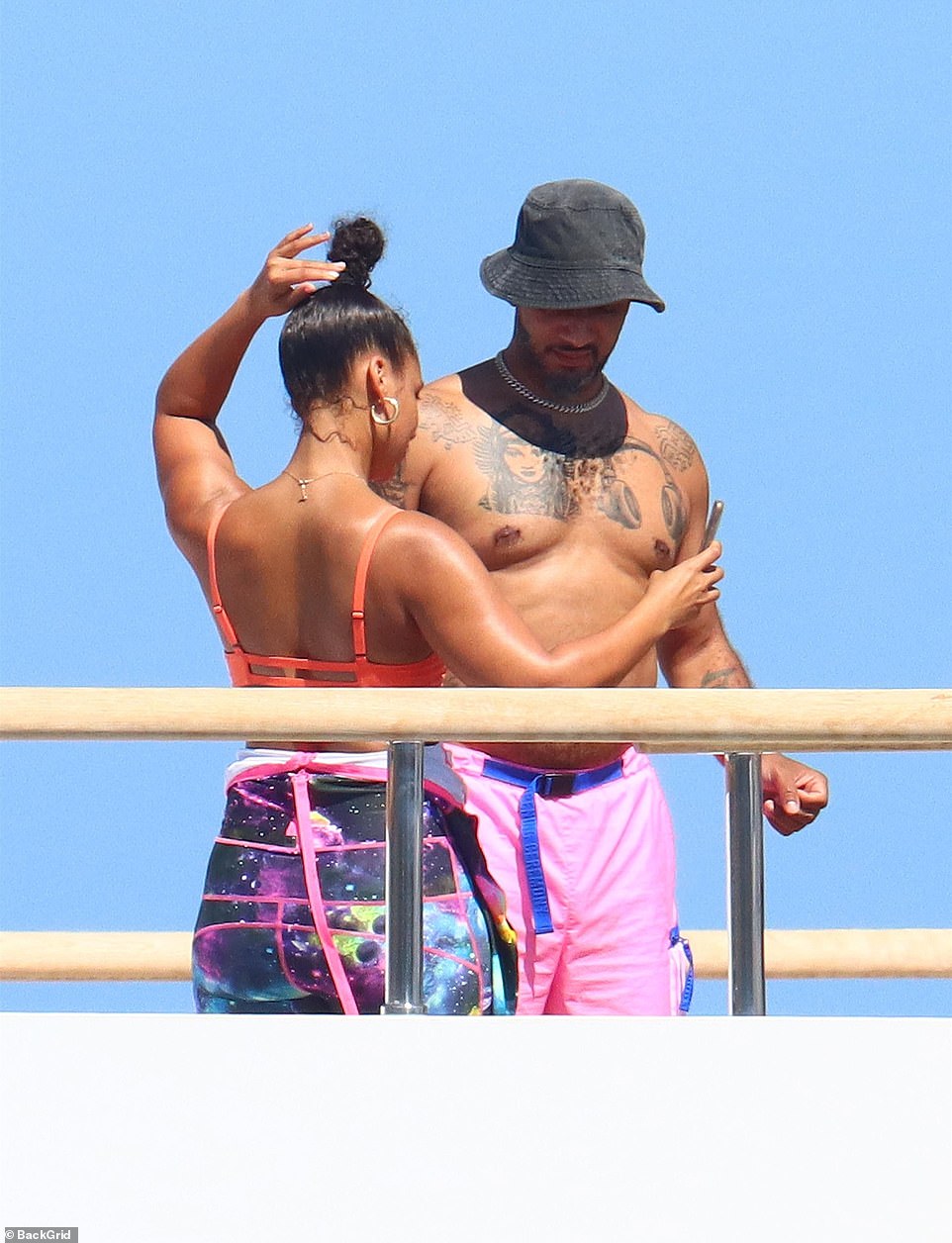 Parents: The couple share two children together Genesis, six, and Egypt, ten and married in Corsica in 2010