Alien crystals ‘unlike anything found on Earth’ may line the shorelines of Saturn’s moon Titan, NASA says

Exotic crystals — entirely unlike anything found naturally on Earth — might encrust the shorelines of lakes on Saturn’s frozen moon, Titan.

NASA researchers recreated the chilly conditions of Titan’s surface in the laboratory and found they could form strange new mineral compounds.

These included so-called co-crystals made up of solid acetylene and butane, which are used as liquid fuels on Earth.

It is possible that these crystals may make up the ring-like deposits spotted around evaporating lakes on Titan by the famed kamikaze Cassini–Huygens mission.

Exotic crystals — entirely unlike anything found naturally on Earth — might encrust the shorelines of lakes on Saturn’s frozen moon, Titan (pictured, is an artist’s impression)

Titan is the only place on Earth where liquid lakes are known to exist as vast bodies of hydrocarbons survive on the moon’s surface.

Data gathered by the Cassini–Huygens mission in 2004/5 revealed that lakes in the moon’s drier equatorial regions were encircled by deposits of mystery materials left behind as the liquids evaporated, much like soap scum around a bath.

‘We don’t know yet if we have these bathtub rings,’ said Dr Morgan Cable, planetary scientist of the NASA Jet Propulsion Laboratory in California.

To find out what these materials might be made of, Dr Cable of the NASA researchers set about recreating Titan’s alien environment in the laboratory.

It is believed that the atmosphere of Titan is a chilly -291.1°F (-179.5°C), so the researchers first filled a custom-built cold chamber, or cryostat, with liquid nitrogen.

Warming the cryostat slightly caused the liquid nitrogen to turn into gas, in the same way it would on Titan.

Finally, they added to the gas other chemical compounds that are expected to appear on the Saturnian moon — including ethane, methane and other carbon-containing molecules.

The first solids to form out of their cold hydrocarbon soup were crystals of benzene which behaved surprisingly as it incorporated ethane molecules inside itself.

This formed what scientists call a ‘co-crystal’ of the two components and they went on to find that these bizarre mergers also happened for various other chemicals.,

Researchers detected that similar co-crystals composed of acetylene and butane had also formed.

Although the cold environment of Titan allows these compounds to form solid crystals, on Earth they exist as gases and are commonly used as fuel for welding and cooking.

It is thought these acetylene–butane co-crystals are likely to be more common than their benzene counterparts, Dr Cable said. 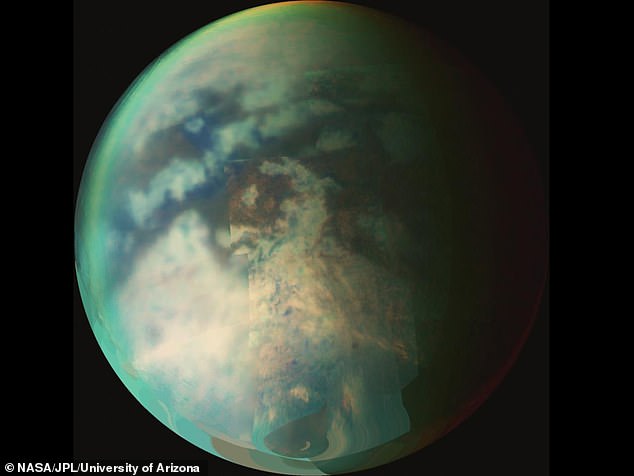 Recreating the chilly conditions of Titan’s surface in the laboratory, NASA researchers found that they could form strange new mineral compounds 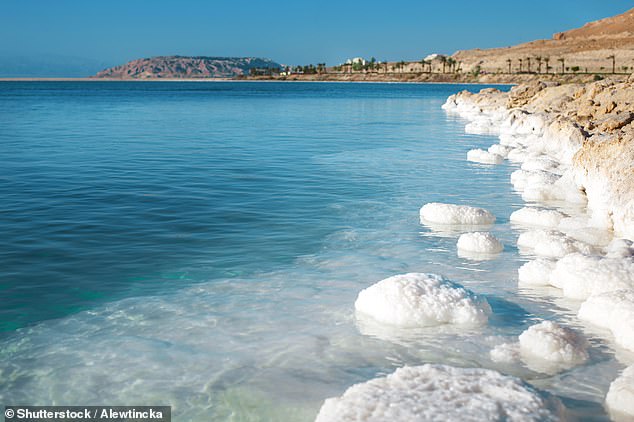 A similar process occurs on the Earth, where salts can form concentric crusts around the shores of lakes and seas — such as around the edges of the Dead Sea — Dr Cable explained

Researchers think that in Titan’s cold climate, acetylene-butane co-crystals might form around lakes on the moon as the liquid evaporates, causing crystals to form at their edges.

A similar process occurs on the Earth, where salts can form crusts around the shores of lakes and seas, Dr Cable explained.

The crystals may even provide a source of energy for any potential life that could exist on the moon, the researchers suggest.

It will take a spacecraft actually visiting Titan’s shorelines to confirm whether these crystals actually exist on the distant moon, however.

The full findings of the study were presented on June 24 during the 2019 Astrobiology Science Conference held in Seattle, Washington.