Alien lifeforms could be living within habitable pockets in Venus’ clouds

Alien lifeforms ‘unlike anything we’ve ever seen’ may be living in the clouds of Venus, a new study has claimed.

With an atmosphere thick with carbon dioxide and a surface hot enough to melt lead, it is hard to imagine a more inhospitable world than our closest planetary neighbour.

But now scientists think the planet could be becoming ‘more habitable’ after identifying a chemical pathway by which life could neutralise Venus’ acidic environment, creating a self-sustaining, habitable pocket in the clouds.

Alien lifeforms ‘unlike anything we’ve ever seen’ may be living in the clouds of Venus, a new study has claimed. Pictured is an artist’s impression of what this microbial life could look like

Venus, the second planet from the sun, is a rocky world about the same size and mass as the Earth.

The inhospitable planet is swaddled in clouds of sulphuric acid that make the surface impossible to glimpse.

In the past, it has been suggested that Venus likely had oceans similar to Earth’s – but these would have vaporised as it underwent a runaway greenhouse effect.

For nearly 50 years experts have been baffled by the presence of ammonia, a colourless gas made of nitrogen and hydrogen, which was tentatively detected in Venus’ atmosphere in the 1970s.

At the heart of the confusion is that it should not be produced through any chemical process known on the hellish planet.

In the new study by Cardiff University, MIT and Cambridge University, researchers modelled a set of chemical processes to show that if ammonia is present, the gas would create a cascade of reactions that would neutralise surrounding droplets of sulphuric acid.

If that were the case, this would then result in the acidity of the clouds dropping from -11 to zero, which although still very acidic on the pH scale, is a level that life could potentially survive at.

As for the source of ammonia itself, the authors believe the most plausible explanation is of biological origin, rather lightning or volcanic eruptions.

This chemistry suggests that life could be making its own environment on Venus.

‘No life that we know of could survive in the Venus droplets,’ said study co-author Sara Seager, from MIT.

‘But the point is, maybe some life is there, and is modifying its environment so that it is liveable.’

The researchers said their hypothesis could soon be tested with proposed Venus-bound missions, such as the Venus Life Finder mission due to launch in 2023.

If they are correct, the lifeforms are likely to be microbes similar to bacteria found on Earth.

‘It has hydrogen attached to it, and there’s very little hydrogen around. Any gas that doesn’t belong in the context of its environment is automatically suspicious for being made by life.’

The presence of ammonia could explain most of the major anomalies seen in Venus’ clouds, the researchers said.

On our planet, ammonia is a common left-over waste from aquatic organisms. 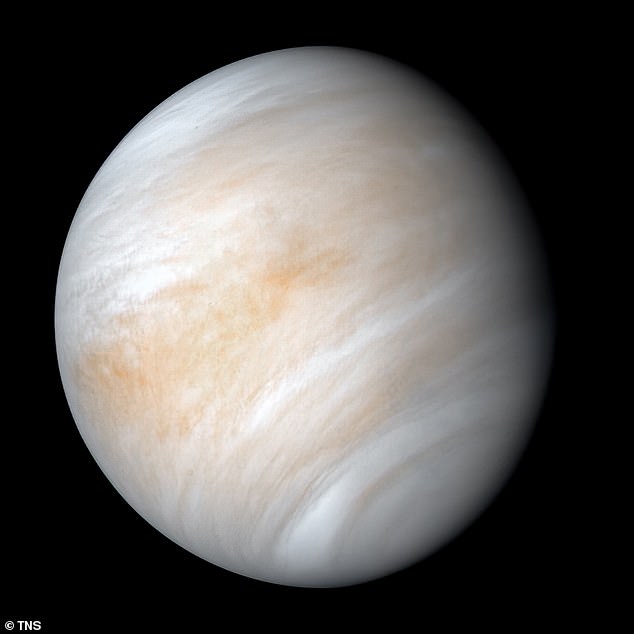 For nearly 50 years experts have been baffled by the presence of ammonia, a colourless gas made of nitrogen and oxygen, which was tentatively detected in Venus’ atmosphere in the 70s

In fact, the team notes that there are life-forms on Earth — particularly in our own stomachs — that produce ammonia to neutralise and make liveable an otherwise highly-acidic environment.

Co-author of the study Dr William Bains, from Cardiff University’s School of Physics and Astronomy, said: ‘We know that life can grow in acid environments on Earth, but nothing as acid as the clouds of Venus were believed to be.

‘But if something is making ammonia in the clouds, then that will neutralise some of the droplets, making them potentially more habitable.’

Hopes of finding life on Venus have previously been dashed after a study published in July this year claimed that phosphine gas originally thought to be coming from microbes may actually be produced by volcanoes.

In September 2020, a team of researchers led by a Cardiff University expert reported that they had detected trace amounts of the gas in the planet’s acidic clouds.

Phosphine is often released by microorganisms on Earth that don’t use oxygen to breathe, which led the researchers at the time to speculate Venus could be harbouring life.

The latest study has been published in the journal Proceedings of the National Academy of Sciences.