The name Tolkien is synonymous with inheritance problems. The Lord Of The Rings is all about a cursed legacy and whether Frodo can escape the evil that follows the ring.

But as the author’s family, led by his literary executor son Christopher, 94, disowns a new biographical film about his life, new evidence has emerged that shows J.R.R. Tolkien’s personal legacy is vexed.

They centre on allegations that his eldest son, Father John Tolkien, sexually abused boys, and a tape recording in which the priest suggests that he, too, was the victim of abuse by academic friends of his father.

As the family of Hobbit author JRR Tolkien disowns a new biographical film about his life, new evidence has emerged that shows J.R.R. Tolkien’s personal legacy is vexed. The film, Tolkien, stars Nicholas Hoult (left) as the famous author and Lily Collins as his wife

The clannish, not to say secretive, family — who deal with the outside world via a small group of trusted lawyers — decline to comment.

That’s always been the Tolkien way. Indeed, they have quietly fought multiple legal actions over the Lord Of The Rings films and been embroiled in several lesser skirmishes over tie-in books and video games.

What’s more, we can reveal that his estate is facing an investigation by Her Majesty’s Revenue & Customs over the suggestion that the taxman may be owed £5.5 million for a ‘misdeclared’ chunk of income.

These are torrid times for the Tolkiens.

But now, Catherine Pepinster, former editor of the Catholic magazine The Tablet, says that John himself was abused as a boy, and that he was assaulted in the family home by at least one of his university don-turned-mythologist father’s Oxford friends.

A tape recording has emerged in which one of Father John’s accusers discusses his childhood in the Twenties.

Catherine says: ‘At the time, J.R.R. Tolkien was professor of Anglo-Saxon at Oxford. His friends included C.S. Lewis (a fellow academic and author of the Narnia novels), and among his students was the poet W.H. Auden.

‘When the priest was asked if he had been abused himself as a child, he said: “When I was a boy, I was constantly surrounded by my father and colleagues of my father. Almost without exception, they were academics and, you know, some of them were pretty strange fellows.

‘ “Often, people would stay the night. I often awoke in the morning to find someone sharing my bed.

‘ “More often than not, it would be — well, I don’t intend to name names, just to say that this particular person who I loved dearly, not in a sexual way, you understand, this person would be fast asleep, huddled up next to me. 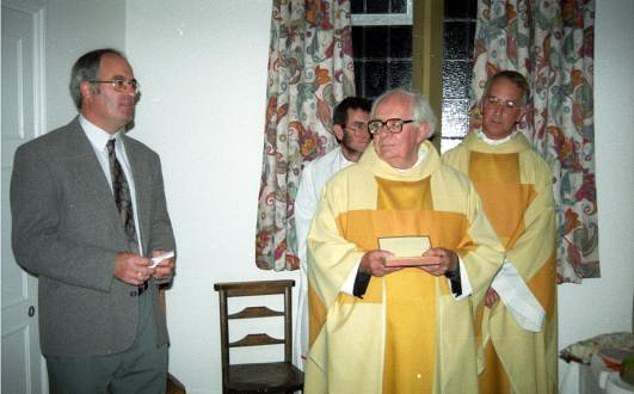 They centre on allegations that his eldest son, Father John Tolkien (above), sexually abused boys, and a tape recording in which the priest suggests that he, too, was the victim of abuse by academic friends of his father

‘ “Well, let’s say things had gone on in the night. I knew this. If you wake up with your pyjamas off and they were on when you went to sleep.” ’

Pepinster says the recording was made in 1994 by Christopher Carrie, who told the independent inquiry into child sexual abuse that Father John Tolkien sexually assaulted him twice in 1956.

Carrie first made allegations in 2001 but the Crown Prosecution Service did not charge Tolkien. The priest was suffering from dementia and died two years later. Carrie received out-of-court compensation from the church.

Along with some fellow Oxford dons, J.R.R. Tolkien was part of an informal literary group, the Inklings, which met in a back room at the Eagle & Child pub.

In his work as a professor, he delved deep into Old English epic poetry and began writing about Middle Earth while in the trenches in 1916 but the work was never finished.

The first line of The Hobbit — ‘In a hole in the ground there lived a hobbit’ — came to him while marking exam papers.

One night, Tolkien was reading a chapter of the yet-unpublished The Lord Of The Rings aloud to his fellow Inklings and a colleague is said to have groaned: ‘Oh no, not another f***ing elf.’

But as well all now know, The Lord Of The Rings became one of the best-selling novels of all time, with 150 million copies sold — even though, with no sex, an invented language, poetry and maps, it’s unlike any other fictional blockbuster.

However, Tolkien unwisely signed away exclusive rights to film adaptations of his works, merchandising in 1969, saying: ‘I’m sure that there is no chance of a film being made.’

The fee was said to be £100,000 — worth around £1.65 million today — although he retained a 7.5 per cent royalty interest in the profits of any future adaptation, which passed to his estate. 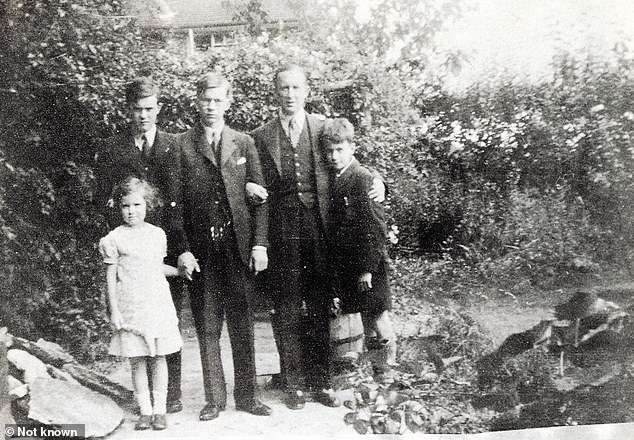 Catherine Pepinster, former editor of the Catholic magazine The Tablet, says that John himself was abused as a boy (third from left with his father JRR Tolkien in 1936), and that he was assaulted in the family home by at least one of his university don-turned-mythologist father’s Oxford friends

In 1978, five years after he died at the age of 81, an animated version of the first half of The Lord Of The Rings was made.

It was a flop. Undaunted by this failure and by the verdict of another of Tolkien’s sons, Christopher, who said the books were ‘peculiarly unsuitable for transformation into visual dramatic form’, new screen versions, very expensively made, of Lord Of The Rings were released in 2001, 2002 and 2003. Christopher acidly commented: ‘They eviscerated the book, making it an action movie for 15-25 year olds.’

In 2008, the Tolkien Trust, which looks after the author’s estate, sued the film company for £75 million, saying it hadn’t received a penny despite the deal to receive 7.5 per cent of profits.

The films have taken £2.2 billion at the box office — and then there’s the merchandising from dishcloths to T-shirts — tie-ins unforeseen in the original contract.

A new financial agreement was reached in 2009 and Christopher Tolkien agreed that The Hobbit films could be made.

It’s not known how much money was paid in the out-of-court settlement.

However, accounts filed last year indicate that the family, or the trust, may have received a payment of around £25 million.

But the family could now have to deal with the taxman. Notes to the accounts of the Tolkien Estate limited say: ‘HMRC are inquiring into whether a substantial receipt by the JRR Tolkien Discretionary Settlement in 2009/10 should have been taken as income rather than capital (which could involve a substantial additional tax liability of £5.5 million.)’

Solicitor Catherine Blackburn, who acts for the estate, said: ‘I regret that I’m not able to comment on these matters.’ 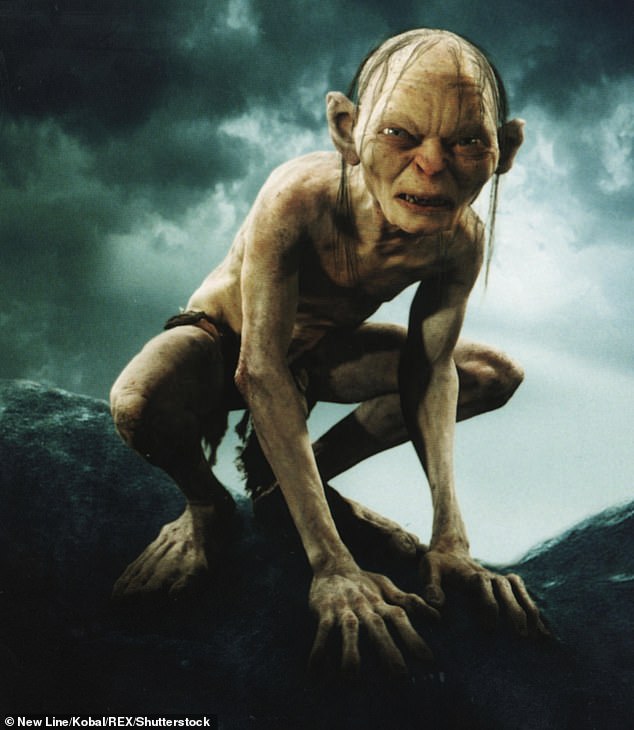 Undaunted by the failure of a 1978 animated version of the Lord Of The Rings and by the verdict of another of Tolkien’s sons, Christopher, who said the books were ‘peculiarly unsuitable for transformation into visual dramatic form’, new screen versions, very expensively made, of Lord Of The Rings were released in 2001, 2002 and 2003

That’s not the only legal skirmish. In 2011, the estate took legal action over Mirkwood: A Novel About J.R.R Tolkien, which used the Oxford don as its central character. And there have been other legal actions, threats or disputes.

Tolkien’s grandson, Simon, once had a massive falling out with his father (Christopher), saying he felt that the estate should take a ‘much more positive line’ on the films. They’ve since reconciled.

None of the family seems to welcome the spotlight being cast by the new biographical film, Tolkien, which comes out this week. It stars Nicholas Hoult as the author and Lily Collins as his wife.

In a snappy statement, the Tolkien Estate said they had no part in its making and ‘do not endorse it or its content in any way’.

But any misgivings over the new film, which will depict the orphaned Tolkien falling in love with his wife-to-be, and the friendships of his early years, pale into insignificance compared with the supposed scandal over his son, Father John.