ALISON BOSHOFF on the war between Liam, Noel and their children

For some time now, Liam Gallagher has referred to himself with that trademark swagger as a ‘top dad.’

With four children by four different mothers, and having conceived two of those offspring while actually married to the mothers of two of the others, it’s a rather bold assertion.

And that’s before you even consider the ugly court fight in 2015 which saw Liam fined for ‘frivolous conduct’ for not showing up to hearings over maintenance for the love child he had with journalist Liza Ghorbani in 2013.

But Liam, formerly of Oasis, has a solo album to sell. So yesterday — in an interview which will surely have had all four mothers rolling their eyes — he was to be found giving the hard sell to his fathering skills. ‘I’ve been mega,’ he said, as he posed for the camera with his arms around sons Lennon, 19, Gene, 17, and daughter Molly, 21.

Gallagher (second from left) with daughter Molly Moorish. Cracking broad smiles, the fatherand daughter are also joined by Liam’s sons Lennon, 18, and Gene, 16, from his marriages to Patsy Kensit and Nicole Appleton

Lennon, of course, is the son he sired with first wife Patsy Kensit and Gene is the son of the second Mrs Gallagher, former All Saints singer Nicole Appleton. But it is the presence of daughter Molly which will have raised most monobrows … sorry, eyebrows.

For the dark-haired, but distinctively Gallagher, young woman is the result of a coupling between Mancunian frontman and singer Lisa Moorish, which allegedly took place shortly after he married actress Kensit.

And if that were not unseemly enough, Liam only met his first-born daughter a year ago. Under such circumstances, surely anyone would despair of Liam holding forth on his parenting credentials, but his current girlfriend, Debbie Gwyther — a member of his management team — seems to have suggested the idea.

‘Debbie said, “Shall we do this thing for Father’s Day?” and I was, like, “I could do with some good press”. So I jumped at the chance. If anything, to get some pictures of us,’ he said.

Now Liam, 46, has, to be fair, written a song about Molly on the new album called Now That I’ve Found You. Critics may observe, that she wasn’t exactly difficult to find, for a father who had really wanted to. The story of her conception and upbringing shines a harsh light on Liam as both a father and husband.

Molly was conceived during a two-year on-and-off affair between Liam and Lisa. To complicate matters, Liam was married to actress Patsy at the time. Indeed, Patsy believes that Lisa fell pregnant within a week of her marriage to Liam in 1997. 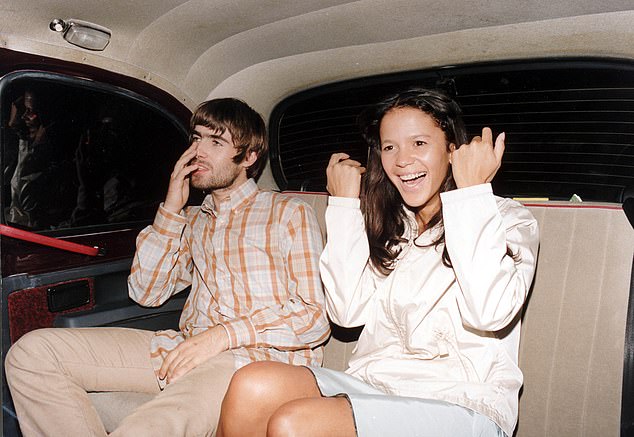 Liam Gallagher and Lisa Moorish, sitting in the back of taxi during the heyday of Oasis in the 1990s

Patsy and Liam went on to have son Lennon in 1999 but split soon after, when Patsy discovered that Liam had fathered Molly.

Lisa later explained that Liam had wanted her to have an abortion, and declined to have anything to do with their baby. She didn’t name him as the father on the birth certificate and Patsy claimed Lisa had been paid to keep quiet. Liam initially denied paternity.

Lisa said: ‘The man from Manchester was very angry that I decided to go ahead with the pregnancy and decided to stay out of her life. I felt sad but accepted it. He agreed to pay his way.’ 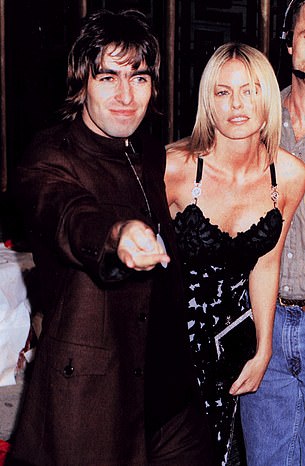 Liam Gallagher with Patsy Kensit in the 1990s

During an interview in 2010 Liam said: ‘As she was growing up, I thought it was the best way, instead of having me popping in and arguing with the f***ing woman [Lisa Moorish]. She knows where I am and I’m there for her if she needs anything, like I have been since she was born, financially. I know it’s not about that, but it’s better than nothing.’

Liam won’t say what made him decide to finally make an appearance in Molly’s life. He said: ‘It’s a shame that it didn’t happen earlier, but you can’t live in the past — you just have to draw the line and get stuck in with some super love going forward.’

Perhaps he was prompted to resolve the situation after they very nearly met for the first time by chance at a post-Brit awards party in February 2018.

Liam said at the time that he had ‘heard she was all right’ but had ‘never got around’ to meeting her.

Their first meeting was soon after, in the summer of 2018 in a North London pub (where else?), The Red Lion & Sun in Highgate.

Liam apparently broke down in tears, telling her: ‘I’m so proud of you.’ Within two weeks she was watching him perform at Wembley alongside her brothers. This year she has joined him and Gene and Lennon on tour, and has gone on a family holiday to Greece.

Now 21, and a striking combination of her mother’s beauty and her father’s strong features, Molly is modelling while studying Politics at Goldsmiths University in London. She goes by the name Moorish-Gallagher, and insists she always thought of Gallagher as her father despite his 20-year absence.

‘I don’t have any anger. I’m 21 now. I’m actually thankful for how I was brought up with my mum and how my life’s been. But I’m happy to have him now,’ she said.

Liam says that the new blended family has had no problems ‘touch wood’ and certainly no therapy.

In another thoroughly modern touch, Molly ‘met’ her half-brothers in cyberspace before ever being introduced to them in person. She said: ‘Me and Gene followed each other on Instagram.’

Gene then described in the interview how the meeting took place. ‘I met Molly outside a club. She pushed in front of me in the queue with two boys and I got angry and went: ‘What you doing?’ And she was, like: ‘You’re my brother!’ Lennon, meanwhile, admitted he and Molly had met ‘when we were young’, which their father seemed to know nothing about.

Listening to the bizarre exchange, Liam quipped: ‘It was kind of getting to that time where everyone was bumping into each other, but not saying anything.’

It certainly sounds like an incredibly casual manner in which to connect with your own flesh and blood, and there are some in the Gallagher camp who point to an altogether different reason for the belated meeting between father and daughter. A reason, they would argue, which underpins so many of Liam’s actions: rivalry with brother Noel. 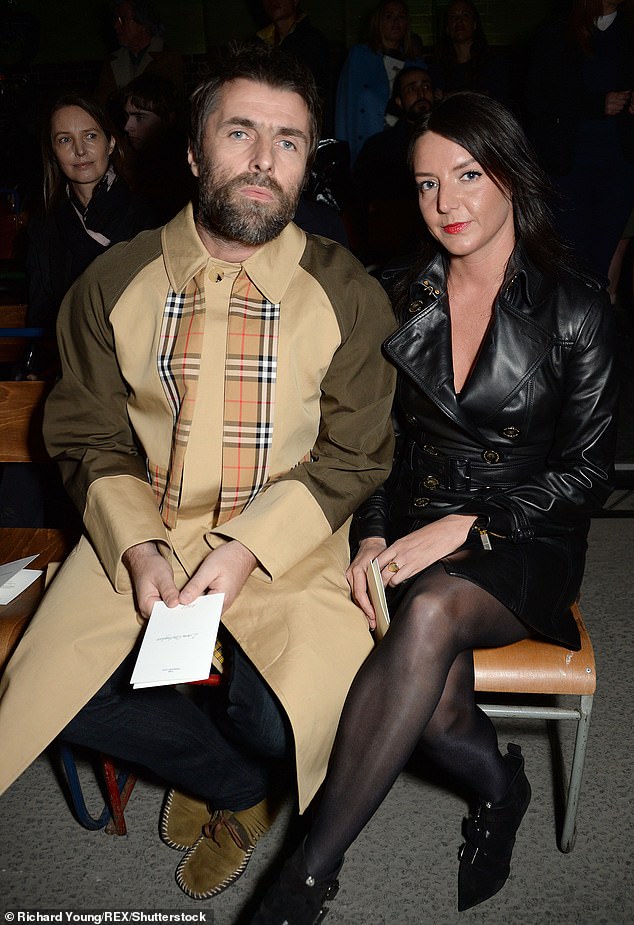 For Noel, who hasn’t been on good terms with Liam for a decade, had kept in touch with Lisa and Molly.

Lisa has long been part of the same social circle as Noel and his second wife Sara MacDonald, and was once a protege of Creation Records boss Alan McGee, who also managed Oasis.

Noel was a part of Molly’s life since she was a child and invited both her and her mother to his 50th birthday in May 2017, after which Lisa posted a picture of Noel and Molly on Instagram. ‘Uncle Noel with my beautiful girl,’ she captioned it. The hashtag ‘Family first’ was appended, pointedly.

I’m told Liam ‘went mad’ over the apparent slight. Within weeks he had reopened hostilities with his brother, accusing Noel of failing to join him at a benefit concert in the wake of the Manchester Arena bombings. In fact, it turned out that Noel had not been invited to the One Love concert. And although Molly is now united with her father — the cost seems to have been the severing of her relationship with Uncle Noel.

In his weekend interview, Liam said that Molly used to see Noel a lot: ‘Until she joined the dark side.’ Gene added: ‘He’s not an uncle.’

Indeed, its clear that the new generation is perpetuating the grudges of their fathers. 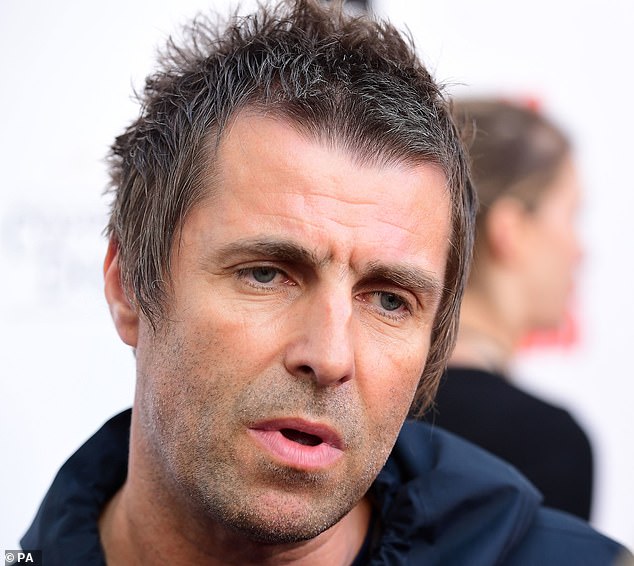 Many apologies: Liam Gallagher has revealed he made a point of apologising to his children, his mother and his girlfriend’s parents after he was captured on CCTV footage last year grabbing his partner Debbie Gwyther’s throat

He said in 2017: ‘Firstly, u look like ur dad [with a] blonde wig on . . . Secondly, u model coz u look like ur dad not coz of who u are.’ He added: ‘Whoever got to [choose] who got to model for Tommy Hilfiger is a complete doughnut who should go spec-savers.’

The relationship between Noel and Liam has always been fractious and dates back to the pair’s beginnings when Noel landed a job as a roadie for the Manchester band Inspiral Carpets and started writing songs.

At that moment Liam formed a band with his friends, prompting Noel to jibe: ‘I’d shared a bedroom with him for years, playing my acoustic guitar and him sitting there going, “You ****ing weirdo”, and all of a sudden he’s a singer.’

Despite their antagonistic relationship they joined forces in Oasis, releasing Definitely Maybe in 1993. What’s The Story? Morning Glory sold over 12 million copies and Noel and Meg were feted by Tony Blair, while Liam and then girlfriend Patsy made the cover of Vanity Fair as Cool Britannia fever gripped the nation.

But on the brink of a tour of America in 1999, with Noel already at the airport, he received a call to say that Liam was going to stay in London to house hunt with Patsy Kensit. In an interview Noel said of Liam: ‘He got drunk. For four or five years. I never saw him sober. He was trying his hardest to destroy everything, that’s how I saw it.’

In 2009, the band finally fell apart after a series of high-profile rows that culminated in a huge debacle at the Rock en Seine festival near Paris, which Noel says saw Liam shouting obscenities and ‘swinging this guitar around and nearly took my face off with it’.

They haven’t spoken since, although there have been some texts. A friend of Noel’s said that jealousy is to blame. The friend said: ‘Noel gets all the money from the songs as he wrote them, and he’s not had to pay off a string of women who he’s had babies with.’

In some ways, it is not surprising that Liam should try to foster closer sibling relations among his brood. But it’s not what you would call conventional parenting.

Liam said: ‘I wouldn’t say I’m a normal dad. I’m not like one of those dads that get up and cooks.’ Instead he explained, he’s ‘more of their mate. . . pretty relaxed’.

At one point he talked about his sons ‘backstage getting off their heads’ when he performs, and joked: ‘I’m their drug dealer.’ He added: ‘We definitely have a drink and a cig and that. But then again, if they get into some shitty stuff, I’ll definitely be piping up and saying: “You’d better be knocking that on the head.” Because as much as you haven’t got a leg to stand on, you still find a toe. You can definitely rein them in, whether you’ve done it all before or not.’

Now, of course, Molly is also in the mix. But there is still one glaring omission from this happy family tableau: fourth child Gemma, now six and Liam’s daughter with New York Times journalist Liza Ghorbani.

In an all-too-familiar pattern, Liam has not met Gemma. ‘It’ll just have to happen naturally,’ he said. Apparently, she has the monobrow, too. But who knows what else she has of her father. 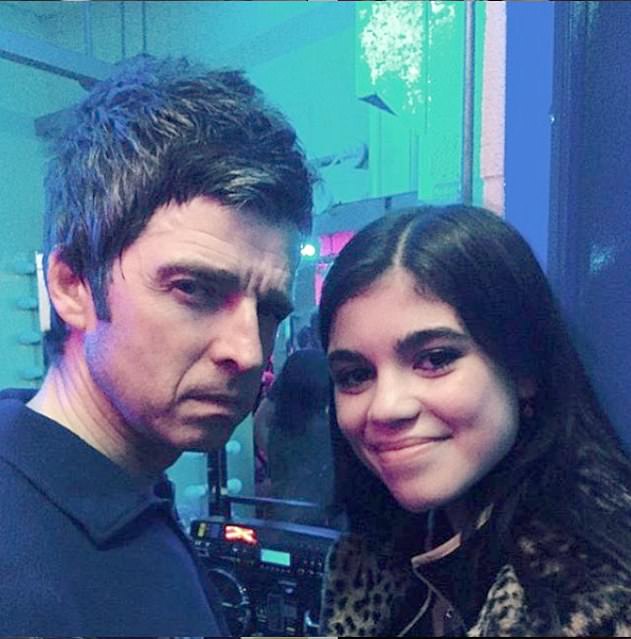