As Hollywood divorce battles go, it’s like the adage about London buses. Nothing comes along for years and then you get three at once.

For now, after the noxious marital combat of Depp/Heard and Pitt/Jolie comes a British version which is every bit as tumultuous — and nearing its own nadir.

At the centre of it are actress Alice Evans, who memorably described the end of her marriage as ‘every woman’s nightmare’, and her husband Ioan Gruffudd, who ditched her for a much younger woman after nearly 15 years — and two children — together.

Now, 15 months after the actor filed for divorce, the wreckage of their split has become even more toxic.

Ioan Gruffudd pictured with his new girlfriend Bianca Wallace. Gruffudd is believed to have gone through two sets of LA lawyers and has engaged Brad Pitt’s divorce lawyer, Anne Kiley

In a bid to bring matters to a close, Mr Gruffudd, who is believed to have gone through two sets of LA lawyers, has engaged Brad Pitt’s divorce lawyer, Anne Kiley.

He is also, it can be revealed, seeking a continuation of a restraining order against Evans, 53.

He took out a temporary restraining order against her in February, citing a string of abusive messages which she had sent him as she came to terms with him walking out.

That was extended a month later and is due to come to court next week, when Gruffudd is expected to ask for it to carry on for at least another year.

The order requires that she doesn’t contact or harass Gruffudd or his girlfriend.

Meanwhile, friends say Evans ‘weeps every day’, and fears that she will lose the house in Los Angeles that she shares with their two young daughters.

She has asked the court to decide what should happen to it. Sources familiar with the proceedings claim Gruffudd is saying that it will have to be sold as he has no further savings.

Both of them have run up huge legal fees. However, despite fortunes being spent on both sides, little progress has been made.

Such is the acrimony between the couple that friends of Evans told me this week that during an argument Gruffudd said: ‘I’d rather be dead than live with you any more!’

In return, she has branded his new love, aspiring actress Bianca Wallace, whom Gruffudd met on the Australian set of a TV drama, a ‘psychopath’.

Sources told the Mail this week that Gruffudd’s betrayal came as a bombshell. A week before he returned from Australia to tell Evans that he no longer loved her, he had sent her a bouquet of flowers for her birthday.

The inscription read: ‘You are the kindest and the sweetest and the loveliest person ever, Happy Birthday my angel.’ 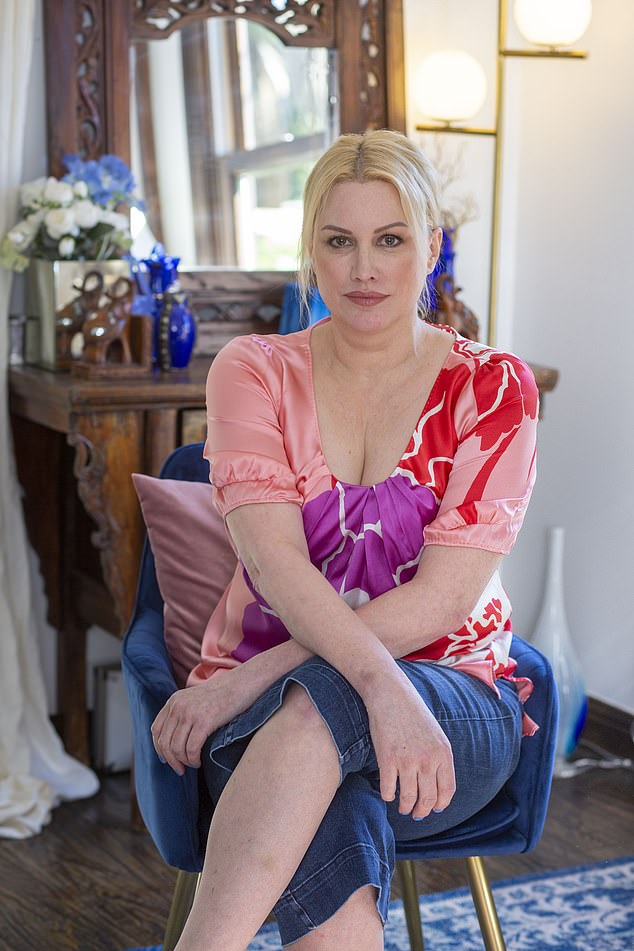 Estranged wife, Alice Evans, 53, had a restraining order taken out on her by her husband in February. He cited a string of abusive messages which she had sent him as she came to terms with him walking out

Gruffudd, the star of the Fantastic Four film and Hornblower, is now living with Ms Wallace in Los Angeles.

Meanwhile, it is understood that he hasn’t seen his two daughters — Ella, 12 and Elsie, eight — in over a year.

A source said: ‘They have agreed that Alice should have primary and physical custody of the girls and Ioan should have visitation rights.’

However, in January this year Evans wrote on Instagram: ‘In 18 months, me and my girls have seen my warm, loving Ioan change from a man with principles, who had decided to have a family and was determined to look after them, to a person who apparently doesn’t care about anyone at all.

‘I’m totally confused. He hasn’t seen his kids for 8 months and yet that doesn’t seem to bother him.’

The saga began when Evans and Gruffudd were cast in the 2000 Disney film 102 Dalmatians.

Evans was engaged to producer Olivier Picasso, the grandson of the painter. But that romance ended and she moved into a flat in London with Gruffudd. They were married in 2007.

After struggles with fertility and IVF they welcomed daughter Ella in 2009, followed by Elsie after eight more rounds of treatment.

By now the family were living in sunny Los Angeles, but there was trouble in paradise. Evans had sacrificed her career to raise the children and Gruffudd had a career slump.

He overcame it with a role in TV drama Liar, which was followed by the series Harrow.

But this wasn’t enough to save their relationship and in January 2021 Evans wrote on Twitter: ‘Sad news. My beloved husband/soulmate of 20 years, Ioan Gruffudd, has announced he is to leave his family, starting next week.

‘Me and our young daughters are very confused and sad. We haven’t been given a reason except that he “no longer loves me”.’

In March 2021 Gruffudd filed for divorce. In October, he went ‘Instagram official’ with Bianca Wallace, posting a picture of them together with the words: ‘Thank you for making me smile again.’

Evans, 53, reacted with fury. ‘So it turns out my husband, after two years of telling me I’m a bad person and I’m not exciting and he no longer wants to have sex with me . . . has been in a relationship for three years behind my back,’ she told her 38k followers.

Asked: ‘Who’s Bianca?’ Evans said: ‘Bianca Wallace seems to be the person he has been in a relationship with for three years whilst blaming our difficulties on me. I’ve just found this out tonight. I feel like killing myself. (I won’t).’

In his court filing, he said that she had harassed him since August 2020, with hundreds of text messages, abusive emails and social media posts.

One message said: ‘You should know what you’ve gotten yourself into . . . I am going to dedicate the rest of my life to spreading awareness of what you have done.’

She went on to allege that he’d told her of times castmates bought cocaine, and that he never gave her sexual pleasure. One text read: ‘I have no idea why the hell I fell in love with you.’

Yet at other times she appears apologetic, writing: ‘I’m sorry I sent ranting texts last night, I’ll try really hard not to do it any more.’ But the messages quickly revert again to being abusive.

In a written statement filed at court, Gruffudd said Evans had verbally threatened to tell the media he abused her and do ‘what Amber Heard did to Johnny Depp’.

In her response in court, Evans said she had ‘never threatened’ Gruffudd with slanderous statements or harassed him.

Friends say that any negative comments she made happened after the marriage ended when she was heartbroken — and he had ‘ghosted’ her.

Whatever the truth, one thing remains clear — when it comes to the Hollywood divorce carousel, there are no winners.