ALISON BOSHOFF: Why Robbie Williams walked out on his £10million gig as an X-Factor judge

He was paid a jaw-dropping, record-breaking £10 million to do it — five times more than Cheryl Tweedy — and got to bring along his wife, who joined him as a judge.

But yesterday pop star Robbie Williams, 45, and wife Ayda Field, 39, announced that they had quit Simon Cowell’s The X Factor after only one series.

In a statement posted on Instagram, Robbie wrote: ‘A quick update from Team Williams . . . it’s been a very busy year so far and Vegas has been incredible — we cannot wait for June and July to do it all again . . .

‘We’ve got some very big announcements coming soon — but we can’t reveal all yet.

‘Sadly as it’s impossible to do everything, we’re gutted to tell you we won’t be able to return to The X Factor this year. We will be working on projects with Simon going forward — and as huge fans of the show, we will still be tuning in to The X Factor, voting and winding Simon up!’

It’s a no from them: Simon Cowell, far right, with his former judges Ayda and Robbie Williams

Sources on The X Factor say there is no question of a fall-out between Robbie and Cowell.

The two men are now close friends, having been brought together — bizarrely — by their female partners who met at a baby gym class in LA. Simon Cowell’s girlfriend Lauren Silverman, who is the mother of their son Eric, four, persuaded him to take on Ayda as well as Robbie after meeting her.

Cowell had actually been trying on and off to get Robbie as a judge since 2004, when the show began.

He believed Robbie and Ayda were a great success and is disappointed to see them go. I’m told both couples were on a joint family skiing holiday last week. 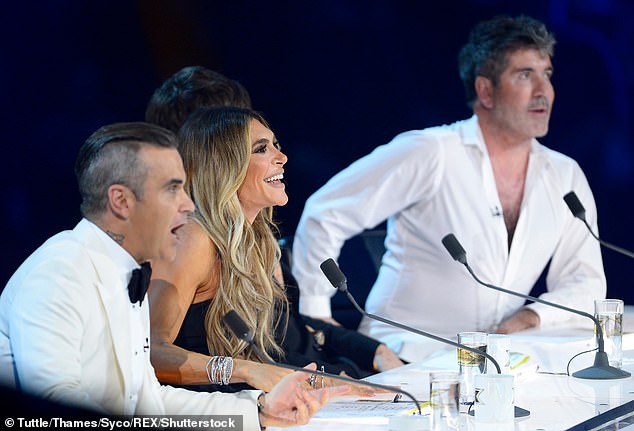 Chemistry: The X Factor judges react during last year’s grand finale. A source says that Robbie and Ayda may return to The X Factor next year

A source says that Robbie and Ayda may return to The X Factor next year.

Boss Simon Cowell, 59, is already engaged in plans to revamp the show, believing he has to ‘upgrade and glamorise’ this long-standing Saturday night behemoth.

But he had hoped Robbie and Ayda would be part of the revamp, as he believed they brought ‘a new energy’ and ‘magic’ to the 15th series of the show last year. Unwilling to preside over decline, and possibly stung by critics who said none of the judges looked as if they want to be on the show and appeared ‘sadder than a dying bear’, in February Cowell scrapped plans for an X Factor this year.

Instead there will be two ‘specials’ — one featuring previous X Factor champions competing against each other, and another with celebrities singing in an X Factor competition. In a world where actor and quiz host Bradley Walsh has a hit album and DIY presenter Nick Knowles chalks up a hit single, this may yet prove to be a good idea. 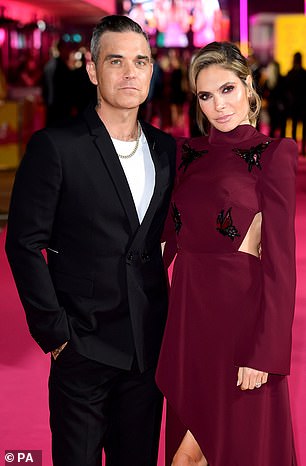 The format was actually tried in the early days of the show, with a ‘Battle of the Stars’ spin-off in 2006. It was some of the oddest TV broadcast on a mainstream channel, with DJ Chris Moyles singing swing standards, and David Beckham’s alleged former fling Rebecca Loos doing a duet with Princess Diana’s ex love James Hewitt.

Cowell said he hoped Robbie and Ayda would stay on the panel, but Robbie didn’t want to commit to judging either or both of these.

He has a residency in Vegas in June and July, and claims to have other ‘exciting plans’ for the end of the year which mean he can’t take part.

This year is part of a ‘four-year plan’ to rejuvenate the show after crisis talks with ITV led to some bold, radical steps to stop the rot. So what does Cowell have up his sleeve — and will he pull off yet another high-stakes gamble?

He seems to have the continued faith of ITV, saying recently: ‘We could probably do three years or five years.

‘It makes a lot of money. We got to a point years ago where we were able to compete with Strictly because there was that huge audience.

‘We’re losing people now, but fortunately the young audience has actually grown this year and all the advertisers and the sponsors want that income on a Saturday.’

The X Factor remains a solid Saturday night performer in the 16-34 age group, and nothing has come close to replacing it, aside from Britain’s Got Talent, another big hit from Cowell’s production company Syco. 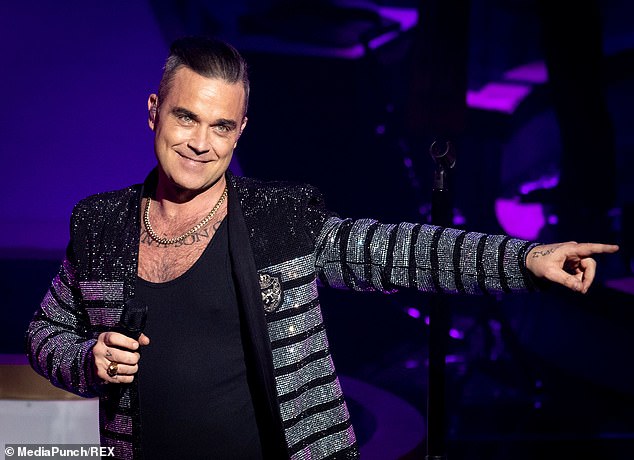 Robbie Williams, 45, and wife Ayda Field, 39, announced that they had quit Simon Cowell’s The X Factor after only one series (pictured: Robbie in Las Vegas, March 6)

Announcing this year’s new format, Cowell said: ‘The time feels right. It will be a huge change. I think it’s going to be huge. This is the best I have felt about this show in years.’

Of course the hiring of Robbie and Ayda was a pull-out-all-the-stops rethink as well. Cowell axed the whole 2017 panel — Louis Walsh, Sharon Osbourne and Nicole Scherzinger — to make way for Robbie and Ayda plus ex One Direction star Louis Tomlinson after the show’s audience dwindled to about 5 million.

He said: ‘It was one of those years that I knew we had to make a change, for sure.

‘It’s definitely not as tense as last year. Last year was hard work.’

Unfortunately, ratings have been falling since 2010, and although the show still performs well with younger viewers, the gamble to bring in big names at huge expense ultimately didn’t pay off.

The series finale was watched by 5.5 million last year, marginally up on 5.2 million the previous year.

While Strictly Come Dancing on BBC1 cruised to dominance recording over 8 million viewers, The X Factor on ITV continued to struggle.

There are doubts about whether Louis Tomlinson will come back this year.

Although he mentored the eventual winner Dalton Harris, Tomlinson wants to release a solo record and may opt out of The X Factor as a result.

Louis said: ‘I had an amazing experience on the show last year, but if it’s going to get in the way of my mission for this year, which is releasing the album, then it’s probably going to be less likely.’