Alison Steadman: Who are you calling a national treasure?

People moaning about getting old? Can’t bear it. UK politics? A mess. Getting into bed with John Cleese – yet again? Go on, then. Forthright and as funny as ever, actress Alison Steadman tells Judith Woods how it is

There’s one thing I can’t bear – people moaning about getting old!’ cries Alison Steadman. ‘Ageing is a privilege that not everyone gets to experience. Going on about what you can’t do any more is boring and self-defeating. Why not focus on what you can do, for God’s sake?’ Crikey. Tell us how you really feel, Alison. She might be 72 but the girlish merriment remains. ‘I’m old but I’m not old, old,’ she continues. ‘Ninety is old. But I’d like to think I will be popping up doing guest appearances beyond that. Why not?’

It’s a rhetorical question. At least I think so. Either way, she answers it herself. ‘I love my profession. I get tired but I’m in pretty sound shape. If you’ve got your health, you’ve got the world. A doctor told me that most of what you get is in your genes – and I’m very grateful to have good genes.’

That accounts for the great complexion, trim figure and why her career continues to soar. Alison is about to return to our screens in a second series of BBC One’s Hold the Sunset, a comedy about a couple (her partner is played by John Cleese) planning a dream retirement when her 50-year-old son (Jason Watkins) returns home to live. ‘John and I were husband and wife in the film Clockwise, so we’ve already been in bed together,’ she giggles.

While comedy is Alison’s forte, her recent forays into straight acting have impressed the critics. ‘Comedy has always been my favourite,’ she says, ‘but intriguing parts have been coming up, and if the writing’s good, I’m in.’ Interestingly, her recent standout roles have reflected not just where she’s at, but where we’re at, too. If TV is the barometer of society, the signs are there that a seismic shift is occurring in our attitude to ageing. ‘Older people are as complex as any other age group,’ says Alison. ‘Grandmothers aren’t just sweet old dears pottering around the house making tea and we need to see that on screen more; old people having a life, not saying “that’s it” and giving up. It’s lazy to generalise.’ 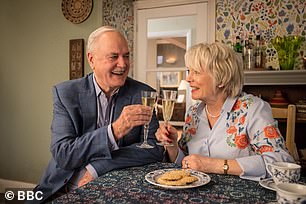 Alison with John Cleese in Hold the Sunset

In the recent BBC One drama Care, her portrayal of an energetic grandmother reduced to mute misery by a stroke was harrowing. Not a word was exchanged on screen between her character, Mary, and Sheridan Smith, who played her daughter, Jenny, and yet that silence spoke volumes about the intensity of both their grief and love.

Alison admits that the drama gave her much to reflect on. ‘As a society we need to examine the issue of assisted dying,’ she says. ‘If three doctors sign the document and the family are on board it could work. Would I consider it? Until you’re in that situation, you just don’t know.’ Alison’s mother, Marjorie, died from pancreatic cancer 21 years ago and spent her final days in the care of Marie Curie nurses. Since then Alison has championed the charity, which supports patients who are terminally ill and their relatives.

Born in Liverpool in 1946, Alison went to the East 15 Acting School in Essex where she met and married director Mike Leigh. It was her portrayal of Beverly in his TV play Abigail’s Party that brought her fame. ‘Of all my work, I’m proudest of Abigail’s Party because we improvised, so I had a lot of input,’ says Alison. ‘Mind you, if anyone had told me that, 42 years on, people would still talk about it, I would have said, “Whaaaat?”’ she laughs.

She and Leigh, who have two sons, split up in 1995 and Alison has been with actor Michael Elwyn, 76, for the past 23 years. The couple live in North London and are the closest of companions. ‘I really appreciate how wonderful it is to enjoy doing things with someone at this stage of life, knowing we’ll be together until one of us…’ she pauses, searching for the right euphemism ‘…flies away up to heaven.’

Meanwhile, her baby grandson Freddy has given life a new dimension. ‘He’s the most gorgeous thing ever born,’ she glows. ‘But I worry about what sort of a planet we’re passing on to him. The world is getting more scary as far as plastic pollution and politics are concerned. I’m a Remainer and it’s all such a mess. It makes me sad but you’ve got to make the best of it.’

Alison softens when I mention the season dedicated to her at the British Film Institute. But she balks at being called a national you-know-what. ‘The whole national treasure thing is so silly,’ she says. ‘It makes me laugh but people say it with such kindness that I’m quite touched by it.’

Does she, I wonder, ever get down?

‘Sometimes but then gratitude bubbles up and everything regains perspective. I love company and a G&T – and if I put on my lipstick I’m ready for anything.’