‘We want to win it… we are so excited’: Alisson Becker calls on Liverpool to seize opportunity to become history makers ahead of Club World Cup showdown with Flamengo

Alisson Becker has called on Liverpool to seize what could be a once-in-a-lifetime opportunity and make history.

Liverpool face Flamengo in the Club World Cup final on Saturday and victory over the Brazilians would not only make this their most successful year since 2001, it would see them secure this prize for the first time. Brazilian Alisson is aware of the emphasis that Flamengo have put on winning here.

‘It is big for Brazilians but I think it is bigger for who is playing in the game,’ said Alisson.

‘If you are on the outside of this competition, you don’t give it value. It is elite, it is just for the winners. Flamengo won the Libertadores. We won the Champions League, Monterrey won the CONCACAF.

‘We have many other clubs here who won big competitions and we are here. We are making this big for us. This is important.

‘It is important to make history and put our names in the club as the first ones ever that won it for Liverpool.

‘You can feel how much Flamengo want this but this is not just big for them, this is big for us also. We want to win it. We will try our best to do it. We are all so excited.’ 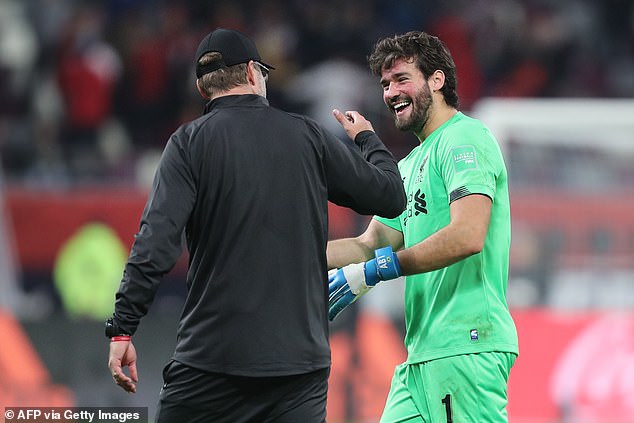 There is a determination within Jurgen Klopp’s squad to finish a hugely successful 2019 by securing a title that eluded Liverpool in 1981, 1984 and 2005.

‘The boys are 100 per cent clear,’ said Klopp, who received a boost on Friday morning when influential defender Virgil van Dijk trained for the first time since Liverpool arrived in Qatar having overcome a virus.

‘They want to win everything. The World Cup winner? You don’t often get the chance to do it. For most of them, they never have a chance to win the (international) World Cup so this is for me also the only chance. I don’t feel pressure, I feel a real opportunity and I want to do it.’