A routine boob job left a young Sydney woman almost blind and with crippling pain until she was underwent emergency surgery to have them removed.

Alivia Celio went under the knife in December to enhance her natural B bust to a size D cup after her breasts shrunk from intense fitness training.

The 23-year-old was initially ‘really happy’ with the results but three months later fell chronically ill with a range of debilitating symptoms that left doctors baffled.

The public relations executive was told she was suffering from ‘stress’ but feared her breast augmentation was making her sick.

Women who have suffered from the condition have labelled it breast implant illness (BII), although most doctors are adamant there is no ‘proven scientific link’ between the surgery and the debilitating symptoms.

Ms Celio has opened up to Daily Mail Australia about her experience with breast augmentation and how her implants left her with progressively worse pain until the moment she underwent ‘explant’ surgery to have the silicone removed. 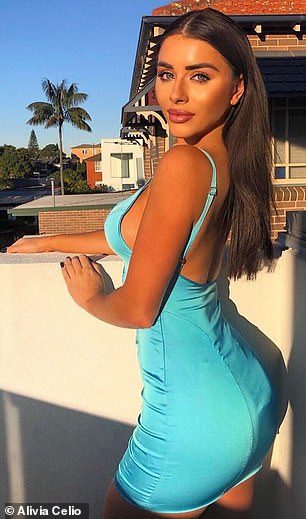 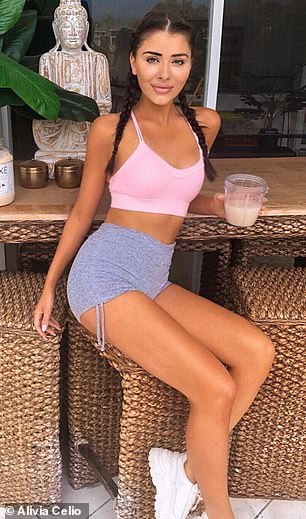 The 23-year-old  is pictured left in July 2019, seven months after undergoing a breast augmentation – and right: November 2019 after getting the implants removed

What is breast implant illness?

Dr Pedro Valente – who’s the medical director at Breast Implant Removal Australia – told Daily Mail Australia breast implant illness (BII) is a term used by women who have breast implants and who self-identify and describe a variety of symptoms they feel are directly connected to their saline or silicone, textured or smooth breast implants.

However, there is no current definitive epidemiological evidence to support a direct link between breast implants and any specific disease process.

Ms Celio said she decided to undergo an $11,000 breast implant surgery at a Sydney clinic after she lost weight around her chest from exercise.

‘I started training seriously so I naturally lost weight. Initially I was tossing up whether or not to get breast implants but eventually, I decided to get my breasts back to the size they were. I just wanted a natural look,’ she told Daily Mail Australia.

‘After the surgery, I was really happy, the size was good and everything I expected happened, like some soreness and swelling.’

But by the end of March year, she started noticing ‘something wasn’t right’.

‘I started to feel more fatigue and my mood declined. I went from a naturally bubbly, outgoing person to being distant with those closest to me,’  she said.

‘I noticed my vision started to become unfocused. I was getting shaky vision when walking. My blurry vision was the one thing that scared me the most,’ she said.

‘I could see it happening. It was kind of alarming and eventually, I stopped driving because I had a lack of confidence.’ 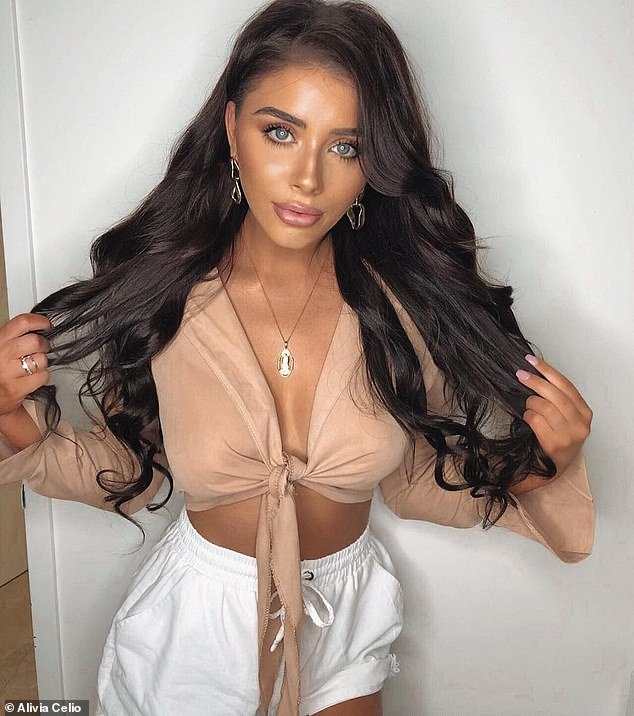 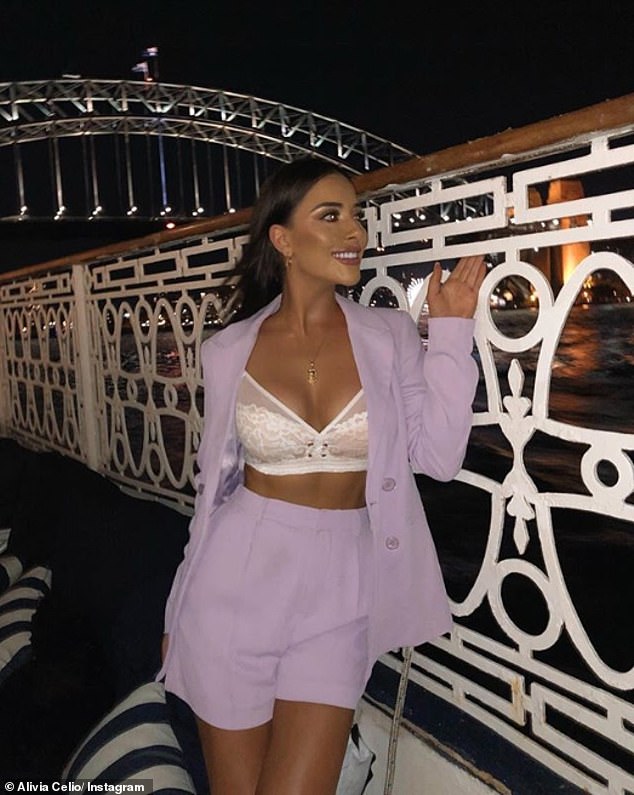 The 23-year-old (pictured in April, 2019) said she was ‘really happy’ with then initial results but by the end of March she started noticing ‘something wasn’t right’

‘I noticed I didn’t have a menstrual cycle. I went to the doctor to do tests, and I was told I had  severely low progesterone,’ she said.

‘My skin colour started to change and I was getting bad acne. My face gained weight as well. I started to developed bright red rashes around my left breast. Due to inflammation in my body, my breasts swelled to over an E cup in the end.

‘I suffered lots of symptoms, they were gradually minor but then it kept worsening.’

Ms Celio underwent a series of tests and an ultrasound but multiple doctors told her time and time again her breast implants were not to blame.

‘My GP told me that my blood results were normal and that I needed to work on managing my stress levels and change my lifestyle habits,’ she said.

‘There were a lot of times where I felt like giving up. I 100 per cent thought I was going crazy.’

As the months went on, her health deteriorated dramatically with still no answers or diagnosis forcing her to quit work.

Ms Celio turned to a naturopath who suggested she may be suffering from breast implants illness despite it not being a medically recognised condition. 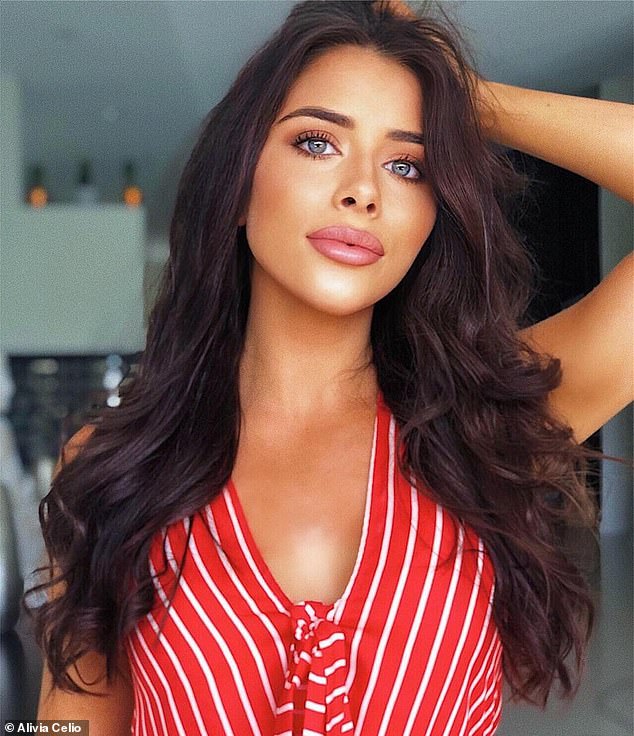 What are the risks associated with breast implants?

Dr. Valente, an aesthetic surgeon in Sydney, said prior to undergoing surgery, patients must have a detailed understanding of the risks and complications associated with a breast augmentation procedure.

‘My implants never ruptured, they were still intact when they were removed. But I was told my body was trying to fight the “foreign object”. So from day one, my body hated the silicone in me,’ she said.

‘As I gradually felt worse, I had further testing to find that my body was in autoimmune response.

‘Antibodies were attacking my healthy cells as a defence mechanism for illness. I was also told that my lungs were functioning as if I was 20 years older than I am.’

After weeks of research, she decided to travel to Ohio to undergo an explant surgery to have her breast implants removed in October, costing her a further $11,000.

‘It’s very hard to find doctors here in Sydney that actually believe in BII. I was told that there was nothing wrong with me,’ she said.

‘Explant surgery is a detailed procedure, all of the surrounding capsule must be removed in order to get better. But I couldn’t find a surgeon here who was prepared to remove the full scar capsule for me.

‘When I met Dr Lu-Jean Feng, she was the first doctor to say “I believe you”. She pretty much saved my life.’ 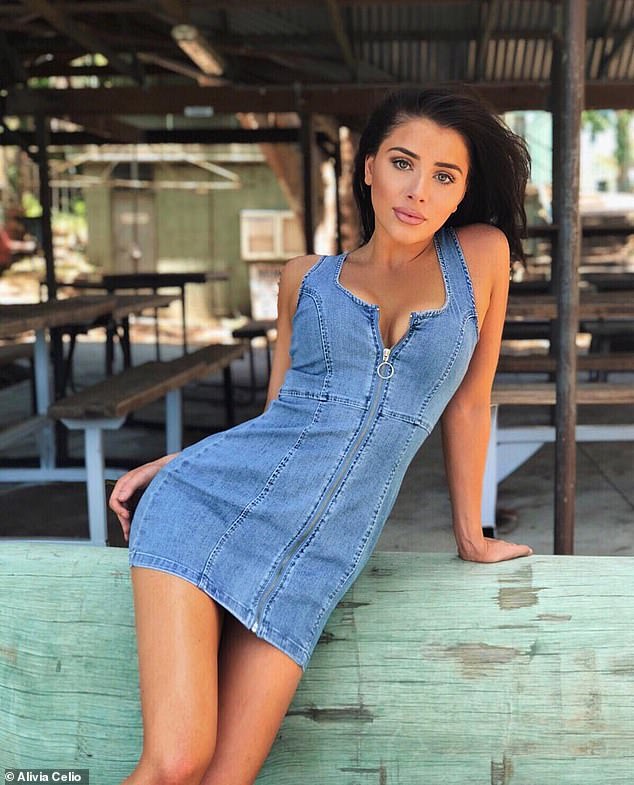 Ms Celio’s  health deteriorated dramatically with no answers or diagnosis

Four days after surgery, she felt like she could ‘breathe again’ and just four weeks on, she has made a remarkable recovery.

‘I feel so different and so much happier after I got them removed. I’m waking up with more energy and my inflammation started calming straight away,’ she said.

‘Basically, the day after I had my breast implants removed, my menstrual cycle came back. My skin colour changed from grey to a light tan and my eyes were white again – I didn’t realise how dull they were.

‘I feel so different and so much happier after I got them removed. I’m waking up with more energy and my inflammation started calming straight away

‘I’m learning to love my body, embrace it and not be so critical of myself. I’m currently taking a break from work to reboot.’

Thousands of women with breast implants have reported symptoms like Ms Celio, who is sharing her story to warn others about the negative side effects of breast implants.

‘I was never warned about the chances of getting really sick before getting breast implants,’ she said.

‘I know so many girls who have undergone the surgery who look and feel great, but if there is anyone out there who is feeling the same way, please I urge you to get it looked into. Your health is crucial and far more important than anything.

‘I hope that sharing my experience can help others, I’m here for anyone struggling. I’m excited for the future, to live life being back to my happy self.’ 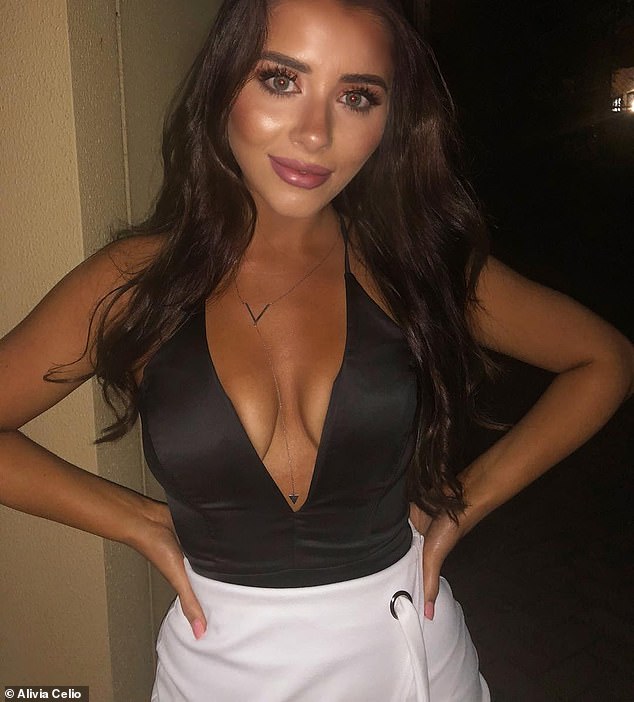 ‘A lack of a direct, proven scientific link does not mean that the symptoms experienced by these patients are not real,’ Dr. Valente told Daily Mail Australia.

‘Some patients have legitimate concerns about a potential link between breast implants and symptoms, so it deserves our attention and further scientific research to better determine what symptoms may improve with explanation of implants.

‘Do not ignore your symptoms or concerns. Your symptoms are real and whether or not they can or cannot be attributed to your implants isn’t relevant since there is simply no existing way to prove nor disprove causation or association.’

Dr Valente said women can seek further medical treatment such as a full clinical examination of the patient starting with clinical imaging of their implants like an ultrasound or MRI, to rule out any potential known implant complications. 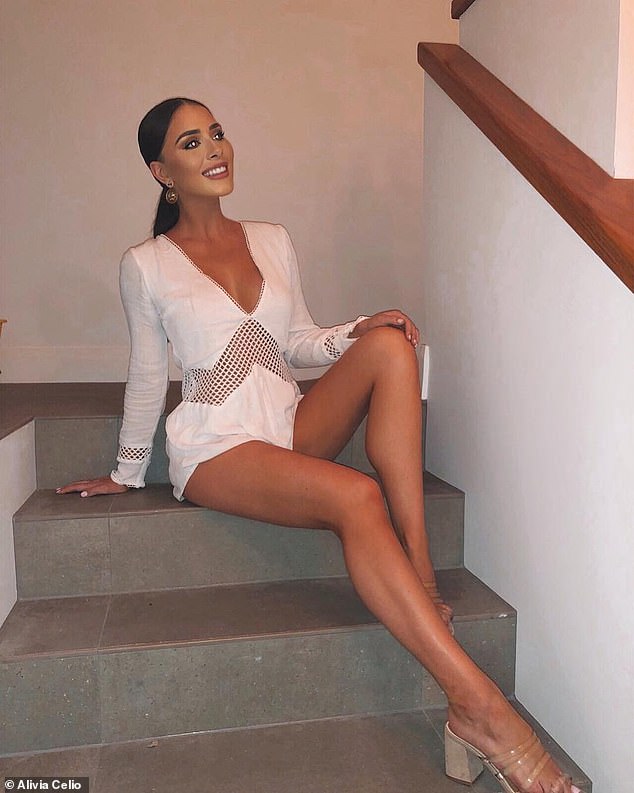 Ms Celio (pictured in January, 2019) said she hopes other women could draw hope from her experiences and seek medical treatment if they’re also suffering from a string of symptoms

‘We cannot yet define breast implant illness and therefore cannot say with any certainty that it exists, because we do not have any tests we can run to prove or disprove its existence,’ he said.

‘However, we can listen to and partner with our patients to determine what is the best course of action to address their complaints, be it explanation or otherwise.

‘Hopefully soon, with further research, we may be able to determine which patients may see symptom improvement or resolution with removal of their implants and which may not see any change.’

Dr Valente said they have seen almost 30 per cent increase in requests for breast implant removal this year alone, and dozens of weekly enquiries.

‘However, we do not recommend removing or replacing implants in women who do not have adverse symptoms, he said.

That being said, some patients are making the personal decision to have their implants removed to eliminate any potential health risks.

‘These women feel that although their implants have served them well in the past, prioritising and protecting their health now outweighs the cosmetic benefits.’