All aboard! Barcelona make their way to Italy as they look ahead to second leg showdown with Roma

Barcelona have embarked on a two-hour flight to Italy on Monday morning as they look ahead to their Champions League quarter-final second leg with Roma.

The Catalan giants take a commanding 4-1 lead to the Italian capital after two own goals and strikes from Gerard Pique and Luis Suarez saw them stumble over the finishing line at the Nou Camp.

It wasn’t pretty but Lionel Messi and his Barcelona team-mates won’t care a bit as they left the departures lounge to board their flight. 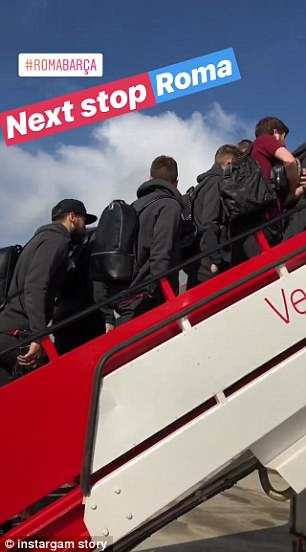 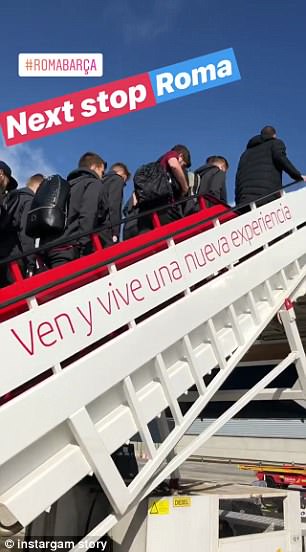 Barcelona stars Andres Iniesta, Samuel Umtiti and Ivan Rakitic were all snapped leaving the airport before they jumped on a shuttle bus that took them to their plane.

The squad looked calm and relaxed as they walked up the steps on to their Monday morning flight.

Like any European away day, Ernesto Valverde and his team set off for their destination a day before the match and will most likely train in the Stadio Olimpico later on Monday evening.

A win on Tuesday will mean Barcelona edge closer to potentially winning the treble, as the league looks wrapped up while they face Sevilla in the Copa del Rey final later this month.

He told uefa.com: ‘Football is a game of errors. You want to make your rivals commit them and to avoid them yourself. We all want our players to be perfect and never make errors but we all do. Even coaches.

‘During the season there are all types of games. Ones where you merit more than you get and ones were you get more than you merit. We scored the goals we merited, they attacked us and got the goal they were looking for, which made our fourth very important.’

‘It’s not just luck that we get own goals in our favour. Things happen for a reason. I think that if these goals go our way it’s because we press high, we push up in attack – the ball is in the opposition area more than usual in other teams’ matches.

‘We played a terrific game. Probably we’d feel better if we hadn’t conceded but we take a decent advantage to Rome.’ 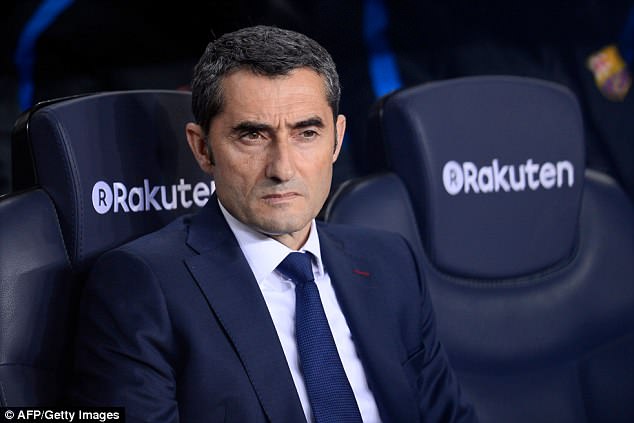