‘Brad Pitt’s not mentally ill,’ I tweeted after the actor’s recent tear-stained outpouring of his ‘emotional vulnerability’ in GQ. ‘He just needs to man up.’

This new phenomenon of public celebrity victimhood leaves me rather cold, particularly when, as with Mr Pitt, excessive partying is excused as ‘mental health issues’.

Presidential mistress Monica Lewinsky, however, found my attitude reprehensible, letting rip at me in an article for Vanity Fair:

Piers writes: This new phenomenon of public celebrity victimhood leaves me rather cold, particularly when, as with Mr Pitt, excessive partying is excused as ‘mental health issues’

‘The bombastic Piers Morgan, of all people,’ she seethed, ‘jumped in from the Twitter peanut gallery. He ridiculed Pitt’s honest emotion and vulnerability while also revealing his own antiquated sense of masculinity. What Morgan failed to acknowledge was the sea change that has occurred in the past generation: to “man up” and to be a “real man”, among young males of conviction and courage, now go hand-in-hand with expressing raw emotion, acknowledging flaws, opening up, facing consequences.’

Men can still be men without blubbing all the time, or constantly exposing their most intimate feelings to the world.

Frankly, we can also do without being lectured on how to behave by a woman whose singular claim to fame is that she had sex with Bill Clinton in the Oval Office.

Ioan, who shot to stardom in Hornblower and Fantastic Four, revealed this week how he hit rock bottom in 2013 after he’d been unemployed for two years.

I remember it well.

At the height of his jobless misery, Ioan sat disconsolately in my Beverly Hills garden, tears welling up in his eyes, wondering what the hell he was going to do next.

The immediate mortifying answer was a trip to a Fantastic Four convention where he was due to spend a whole weekend signing his photo for $30 a pop.

‘Mate, it’s time to man up and get your mojo back,’ I suggested. ‘Let’s play golf tomorrow and have a proper chat.’

So we did, and after some sustained goading from me as he moped miserably around the first few holes, Ioan suddenly exploded into dynamic action, played some stupendous shots, began sledging me back with equal gusto, and ended up shooting the best round of his life – absolutely thrashing me in the process.

‘I’ve definitely got my mojo back!’ he chortled in the bar afterwards.

Ioan went home, and, urged on by his lovely wife Alice, fired his agent and hired a new management team who landed him some big US TV and movie roles.

Ratings smash Liar is the cherry on top of an amazing comeback cake for an incredibly nice guy.

‘It’s been one hell of a journey since that day in your garden four years ago,’ Ioan emailed me this week. ‘Mojo well and truly back after the Morgan bounce!’

I suspect all Brad Pitt really needs is a game of golf with me.

Dominic West, star of The Affair, was a guest on Good Morning Britain today.

I Googled our names together to check if we had any previous history and found an interview he gave to Vulture magazine when the phone-hacking saga erupted in 2011.

In it, he declared: ‘It’s a scandal that seems to be bringing down all the most awful people. I couldn’t be happier. If Piers Morgan goes down as well, then my day would be complete.’

Dominic bounced into the studio with a big grin and greeted Susanna Reid and me with extravagant luvvie warmth.

We did two hits with him, and just before the second one, in the commercial break, I leant over and said: ‘So, do you still want me incarcerated?’

I passed him my phone with the offending comments on screen. 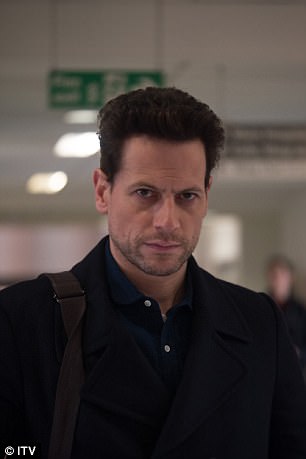 Welsh actor Ioan Gruffudd was one of my best friends in Los Angeles, writes Piers Morgan

So he did, slowly, turning a flustered rouge in the process.

‘Erm… crikey… did I really say that?’

He grimaced and gulped for air, as Susanna giggled nervously.

‘Well, I can only apologise…’ he finally stammered.

‘I would hope so!’ I retorted.

After the show, Dominic revealed he’d been at Eton in the same year as controversial Tory MP Jacob Rees-Mogg. ‘He held the same unpopular views back then and was mercilessly bullied for them. Probably explains how he can handle it so well now.’

‘After watching Piers Morgan every day for the past five weeks on GMB, I’ve decided he is my new hero!’ tweeted viewer Curtis Sinclair.

There was just one problem with this wonderful accolade: due to the summer break, I presented GMB for only six of the 25 days to which he alluded, which means my superfan watched stand-in hosts Eamonn Holmes, Jeremy Kyle and Richard Madeley for the other 19 days and thought they were all me.

Alastair Campbell’s latest volume of diaries contains an intriguing entry from December 16, 2005, when we both attended the same party in Notting Hill:

‘As we left, Cameron and Osborne were talking to Piers Morgan. They said Morgan was the new AC and they were hiring him.’

It’s true. David Cameron and George Osborne were indeed aggressively trying to recruit me to their Conservative cause.

It was only the ghastly thought of being the new Alastair Campbell that stopped me.