All we want for Christmas is a CACTUS! now cactus sales have spiked

Green, prickly and popping up in a living room near you, adorned with baubles, tinsel and twinkling lights . . . no, I’m not talking trees. For Christmas 2018, the nation’s greenery of choice is not the humble fir but the cactus.

According to one national garden centre chain, cacti sales have ‘spiked’ by more than 50 per cent. Internet searches are rocketing (Google generates over 337 million results), while online retailer Amazon is selling 7ft ‘cactus Christmas trees’ for £70. Smaller versions are outstripping sales of traditional poinsettias and amaryllis as festive gifts.

The Christmas craze for cacti — once only associated with dusty Westerns and even dustier garden centre shelves — is the culmination of a trend that has seen them become the hottest plants in Britain this year.

Christmas trend for cacti is culmination of them becoming hottest plants of year. Amazon is selling 7ft ‘cactus Christmas trees’ for £70.

The bustling Topshop store on London’s Oxford Street boasts its own cactus shop, while a garden centre in the capital hosts a two-week cactus festival — and on the photo-sharing site Instagram, there are a staggering 2.1 million posts relating to cacti.

The allure now extends far beyond the world of gardening, taking in fashion, art, interior design and cosmetics. Fans can dress in cactus-themed outfits, decorate their homes with cactus wallpaper, eat off cactus crockery, slather ‘cactus flower’ moisturiser on their bodies — and even drink cactus water (£1.69 from Ocado).

Big spenders, meanwhile, can splash out £187,000 on a gold, emerald and diamond cactus-shaped bracelet by Cartier.

But the 18-35s are not the only ones fuelling demand. Cacti are flying off the shelves at supermarkets from Lidl to Waitrose, while several gardens at this year’s Chelsea Flower Show were populated by the plants.

Gardeners’ World presenter Monty Don is also a pretty fly cacti guy, admitting that he’s a ‘sucker for succulents’ — or plants that store water in their leaves.

Why have we become so transfixed? As pot plants go, they’re hardly things of beauty — and with popular varieties costing £100-plus, they’re not cheap.

Eddy Harris, secretary of the British Cactus and Succulent Society (BCSS) says the resurgence is down to the low-maintenance nature of cacti.

‘Owners — young people especially — love them because they’re very easy to look after,’ he says. ‘You only have to water them during the growing months, typically March to October, and even then it’s once a week.’

Eddy, who has so many cacti he ‘doesn’t dare count’, credits photo-sharing sites such as Instagram and Pinterest for spreading the word. ‘It allows enthusiasts to put theirs on display,’ he says. 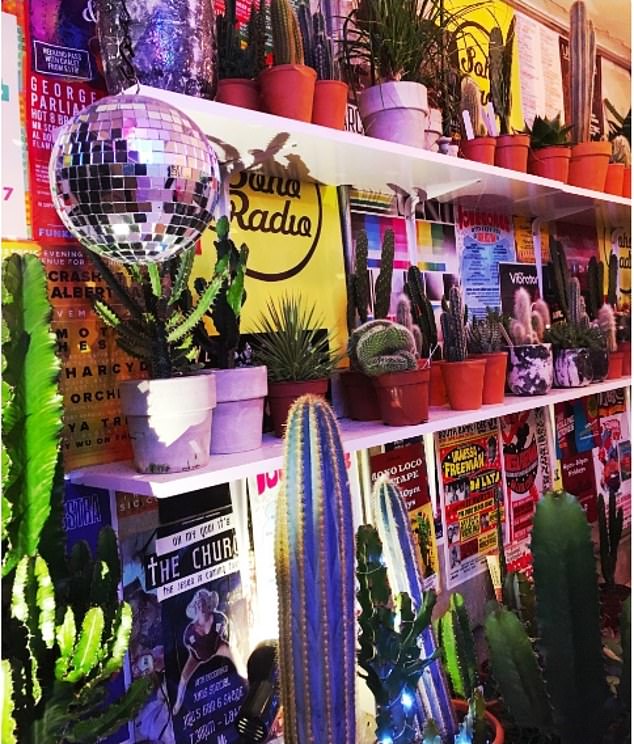 And when these prickly customers are not disporting themselves on the internet, they flourish just as easily on window sills as they do in small gardens.

Linda Goodey, the co-owner of the UK’s largest cactus nursery, Cactusland in Lincolnshire which showcases 750 varieties, says: ‘We’ve definitely seen an increase in customers, particularly twenty- and thirtysomethings looking for plants for indoors or for a very small garden,’ she explains. ‘Cacti are robust so they can survive all sorts of environments.’

Like Eddy, Linda is not surprised by their online appeal. It sounds strange but they each have their own character,’ she adds.

Cacti do come in all shapes and sizes — from one that’s just half an inch across (Blossfeldia liliputana) to one that’s 2,000 years old (Welwitschia mirabilis), one that has poisonous spines (Opuntia fulgida) to another so rare it costs £200,000 (Haageocereus tenuis) for a cucumber-sized clump. Native to the American continent, where they grow wild in deserts and on prairies, cacti thrive in bright and warm surroundings, with their own water supply in their leaves and stems while the spines protect them from hungry animals. 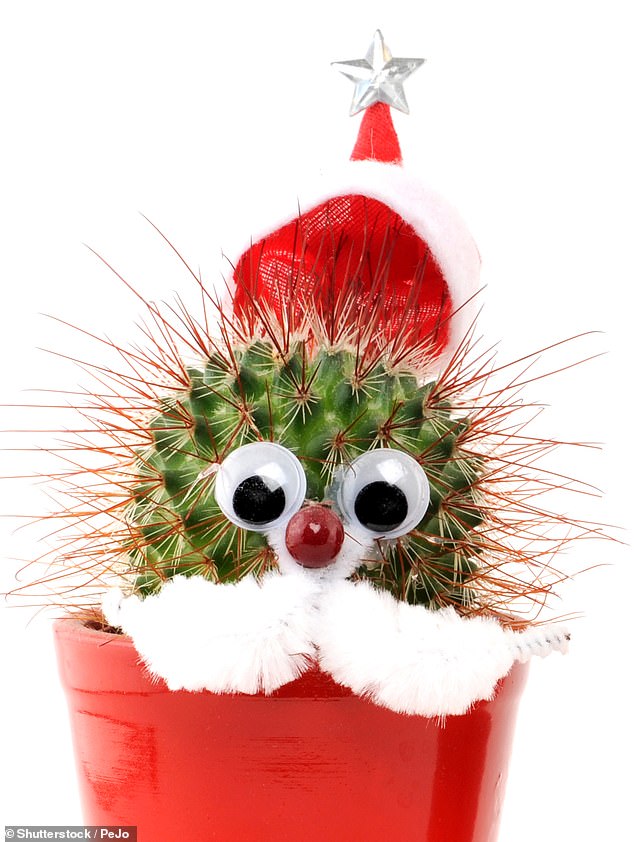 According to a garden centre chain, cati sales have spiked by more than 50%. Pictured, a decorated cactus with Santa’s hat

Cacti have been prized in Britain since the 16th century, according to Gynelle Leon, owner of ‘cacti boutique’ Prick in East London, who says many of her customers are motivated by memories of collecting them in childhood or a parent’s passion for prickles.

‘A lot of older men especially are coming in and restarting their collection,’ she says. But cacti are far more than just horticulture for hobbyists. This is big business, with international vendors such as the Ubink nursery in the Netherlands selling a staggering 10 million a year.

‘We are actually not able to produce as many plants as the market is asking for,’ says owner Hanneke Ubink.

The global market for the shrubs is somewhere in excess of £100 million, with sales jumping by 64 per cent worldwide since 2012.

Ironically, as demand has grown, so 31 per cent of cacti species are critically threatened with extinction, making them more endangered than mammals or birds. This has spawned a lucrative black market, with Californian clifftops being plundered by ‘cactus smugglers’ who export small plants at a vast mark-up to customers in Asia, where they’re seen as a badge of the young, hip middle classes.

Collectors turn to specialist dealers to track down rare species, and offers occasionally crop up on auction websites such as eBay. A tuft of the Copiapoa cinerea was recently listed there for £19,000.

Even in this country, some people will go to extreme lengths to acquire their coveted houseplants, with cacti making up 12.7 per cent of illegally imported shrubs confiscated at Heathrow.

As WITH many a modern craze, it seems there are no half measures. But have we reached peak cactus — or is this one obsession that is set to grow and grow?

Eddy Harris of the BCSS hopes it’s the latter.

‘It’s really nice to see them having a moment,’ he says. ‘Cacti are slow and steady, and some of them aren’t much to look at. But there’s something reassuring about them, when everything else in life is so busy and fast-paced.’

So if you’ve still got some Christmas shopping to do, perhaps it’s worth (carefully) wrapping up a cactus — or, at the very least, stringing some fairy lights on the nearest prickly houseplant.

After all, cactus makes perfect!

Here comes the bride… (and the mother-in-law as well)

A ROSETTE-SHAPED cactus with foliage in all colours and sizes, there are 180 different species. The flowers grow on the top of stalks that appear between the leaves. Used in rock gardens and also in bridal bouquets. Costs between £3 and £20.

ALSO called ‘Mother-in-law’s Tongue’ or ‘the Snake Plant’, this little shrub is sharp and tough. It has stiff, spindly leaves which grow towards the light. Costs around £20.

Characterised by its flat, club-shaped pads, there are over 200 species, from miniature to 16ft monsters. In Mexico, the fruits are a popular snack while the purple juice is used in cocktails, sweets and jellies. Prices from £3.50, to £125 for large shrubs.

With its central stem and curved upright branches, this is straight out of central casting. Never known to flower, it has thorns studded up and down each edge and V-shaped ridges on the stem. Shallow roots make it easy to pot but prone to falling over. Costs £35-£70. And finally for purists . . .

FLOWERING between November and January, the Christmas cactus (pictured) grows in Brazil. It prefers semi-shaded areas to deserts, and the toothing on the leaves makes them appear like shellfish claws. Prices start at £8. 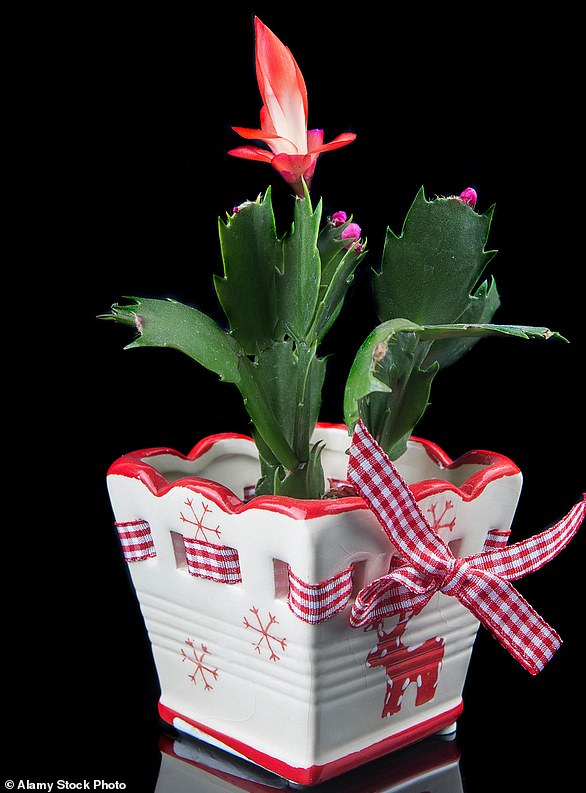