By Ap and Chris Pleasance for MailOnline

Twelve people have gone on trial in Germany over a far-right terror plot to overthrow the government by carrying out attacks on politicians, Muslims and asylum seekers.

Eleven defendants are accused of founding or belonging to ‘Group S’, which prosecutors say was a far-right terror group, and of plotting the attacks.

Another defendant is accused of providing support to the group, while a 13th defendant died in custody last year of a suspected suicide.

The group is accused of hoarding weapons such as guns, axes and swords that were to be used in attacks starting in March last year, a month after they were arrested. 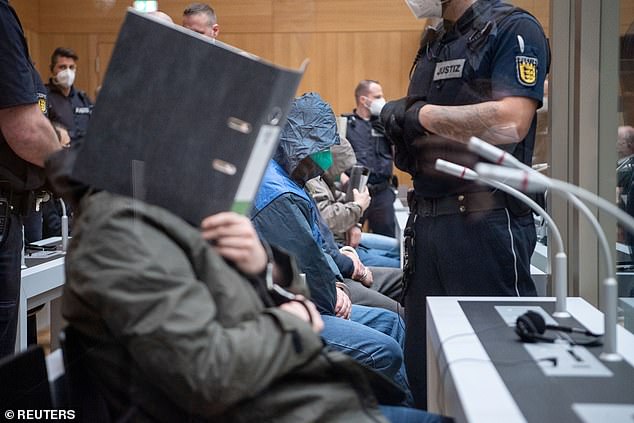 Prosecutors say the group planned to target Muslims, Jews and left-wing politicians in the hopes of creating ‘civil-war’ conditions that would topple the state

Prosecutors say the goal was to create anarchy and civil-war-like conditions that the group hoped would lead to the overthrow of the German government.

Mosques, Jews, and other asylum seekers were also to be targeted.

At one point, a member of the group bragged in a chat message that they could assemble 2,500 armed people at any time, Spiegel reported.

The group was founded in a popular barbecue spot in the small southern municipality of Alfdorf in September 2019, prosecutors allege.

The accused two men – identified only as Werner S and Tony E – of leading efforts to found the group, along with six other initial members.

Prosecutors say the group eventually expanded to include people in the town of Minden and in Berlin. 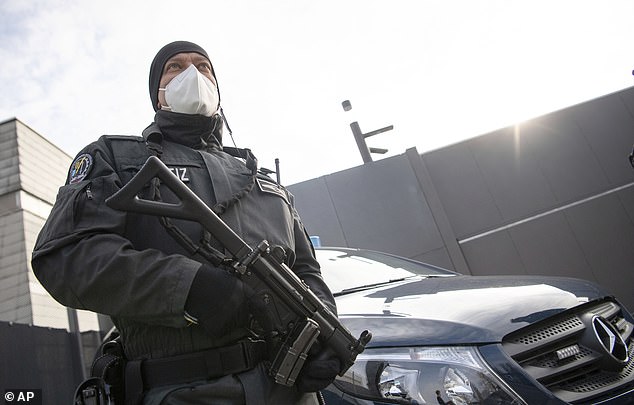 The men largely communicated by phone and via messaging apps to plan their attacks, but also met in person several times, prosecutors said.

But the plan was rumbled after one group member turned informant, and police swooped in to arrest the group.

Much of the evidence to be presented at trial was handed to authorities by that person.

The court was told that the informant is now in witness protection after Werner S allegedly tried to hire a hitman to kill them while in custody.

The trial before the regional court in the south-western city of Stuttgart is expected to last several months.