CLEVELAND (AP) – Cody Allen only knows one way out of his pitching funk.

Fortunately for the Indians, there’s still time for Allen to grind before October arrives.

Minnesota Twins’ Eddie Rosario points to Robbie Grossman after Grossman hit a two-run single in the seventh inning of a baseball game against the Cleveland Indians, Wednesday, Aug. 29, 2018, in Cleveland. Rosario scored on the play. (AP Photo/Tony Dejak)

Cleveland’s struggling closer gave up a two-out, two-run single to Robbie Grossman in the seventh inning as the Minnesota Twins rallied for a 4-3 over the Indians on Wednesday night.

Down 3-2, the Twins came back against Allen (4-6), the Indians’ career saves leader who has not been himself of late. In his last five appearances, Allen has allowed six runs in four innings. Last Friday, he blew a save and the game by giving up consecutive homers in the ninth inning at Kansas City.

His confidence is shaken.

“I’m sure it’s not at an all-time high,” Indians manager Terry Francona said. “That’s part of the game. He’s going through a tough time. He’ll work and for us to get to where we want to go we need him real bad, so we’ll work with him.”

As Allen looks to find his command, Francona is looking for other places to use him than in the ninth. Allen came in earlier than usual to protect a one-run lead in the seventh and got two quick outs before walking Logan Forsythe.

Eddie Rosario singled and Allen gave up a four-pitch walk to Miguel Sano, drawing boos from Indians fans before Grossman ripped his two-run single through the right side.

“Didn’t make pitches,” Allen said. “Even the first two guys, quality pitches weren’t great. It’s just the name of the game, though. The odds are in my favor. Didn’t make any good pitches that whole inning. Was able to get two quick outs and I just couldn’t get that third out.

“We’ve seen this year, myself and our bullpen at times as a whole, that third out can be kind of elusive. And for me personally, that’s just how it is right now.”

Trevor May (3-0) picked up the win and Trevor Hildenberger worked a 1-2-3 ninth for his fifth save as the Twins improved to 9-9 against the AL Central leaders.

With a win Thursday, Minnesota can take the season series from Cleveland – a consolation prize against a team the Twins have chased all season.

“It’s not going to save your season by beating the Indians 10 of 19 ,” manager Paul Molitor said. “But I wouldn’t mind accomplishing that.”

Allen’s latest outing wasn’t the only issue with Cleveland’s bullpen. Before the game, the team placed left-hander Andrew Miller on the disabled list with shoulder soreness. It’s the third stint on the DL this season for Miller, who has been limited to just 27 games.

Miller compared his soreness to what he experiences in spring training.

“Minor setback,” Miller said. “It’s frustrating. It’s been a frustrating stretch for quite a while for me, but I think it’s the right thing to do. It’s going to make a big difference and it’ll help me.”

Indians shortstop Francisco Lindor and third baseman Jose Ramirez both have reached at least 20 homers and 20 steals, becoming the first pair of Cleveland players to do it since Bobby Bonds and Toby Harrah in 1979.

“Pretty good company there,” Molitor said. “You’ve got to get on base a lot. He’s probably not quite the base runner he was when he was younger. He’s always been pretty astute about decision making. I’ve always said there’s an art to scoring runs. He’s climbing up a lot of ladders in Twins history.”

Toby Gardenhire, who manages the Twins’ Class A team at Cedar Rapids, will be added to the big league coaching staff when Minnesota plays at Detroit next month. Gardenhire’s father, Ron, is Detroit’s manager. He also managed the Twins from 2002-14.

Twins: SS Jorge Polanco (strained left hamstring) was out of the lineup for the second straight day. He took swings in the indoor cages, but couldn’t work out on the field before the game because of rain.

Indians: OF Rajai Davis (non-baseball medical condition) served as designated hitter and Neil Ramirez (back spasms) pitched at Double-Akron. Davis went 0 for 3 with a strikeout and Ramirez worked one scoreless inning.

Mike Clevinger will face the Twins for the third time this season, facing right-hander Jake Odorizzi, who has already pitched against Cleveland four times in 2018. 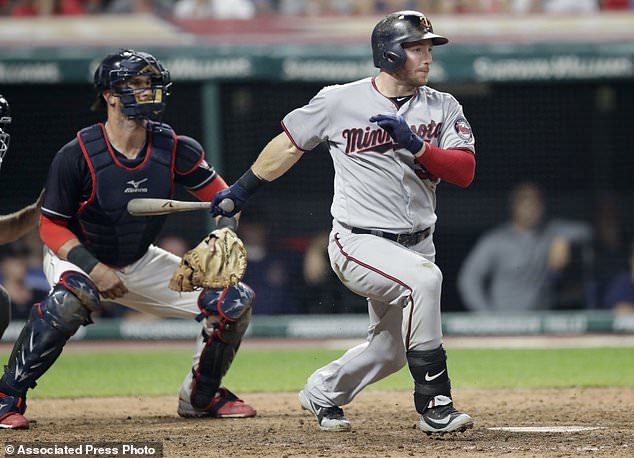 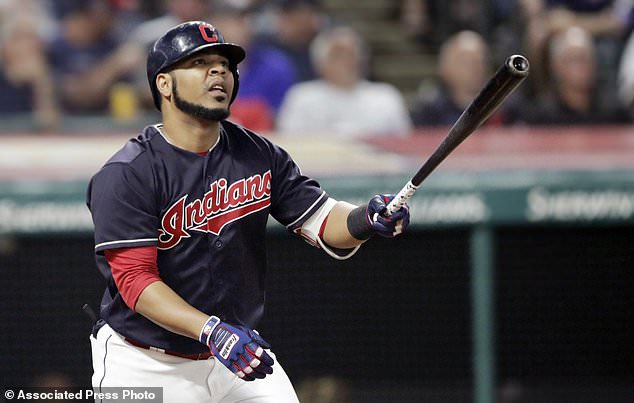 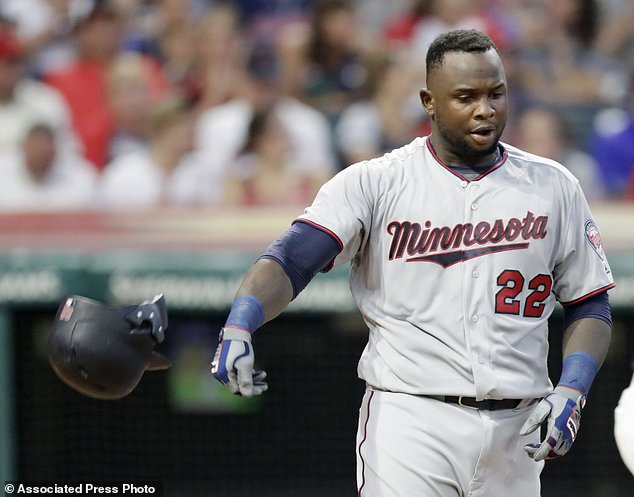 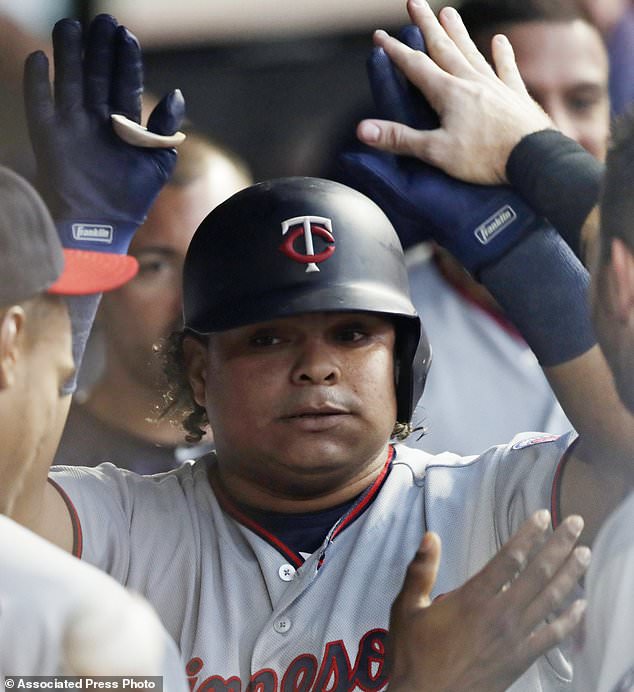 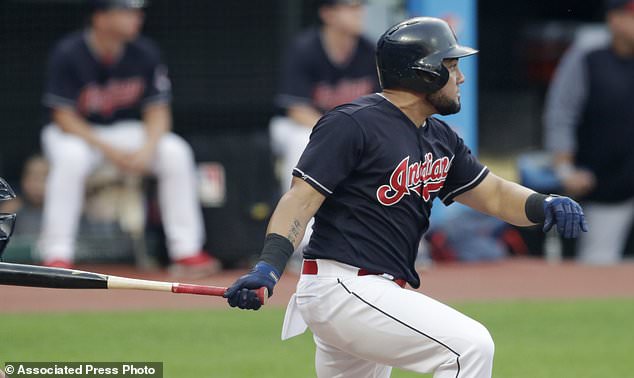 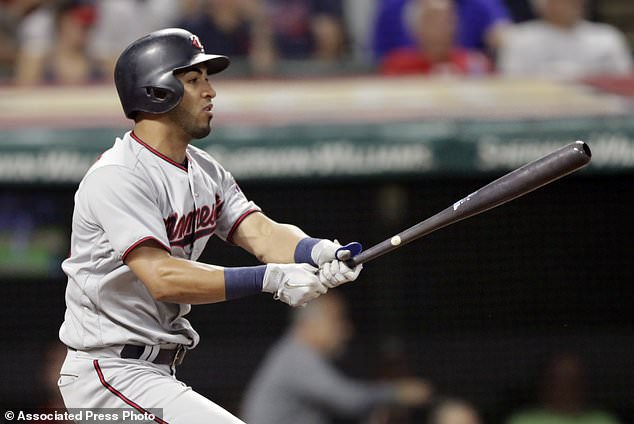 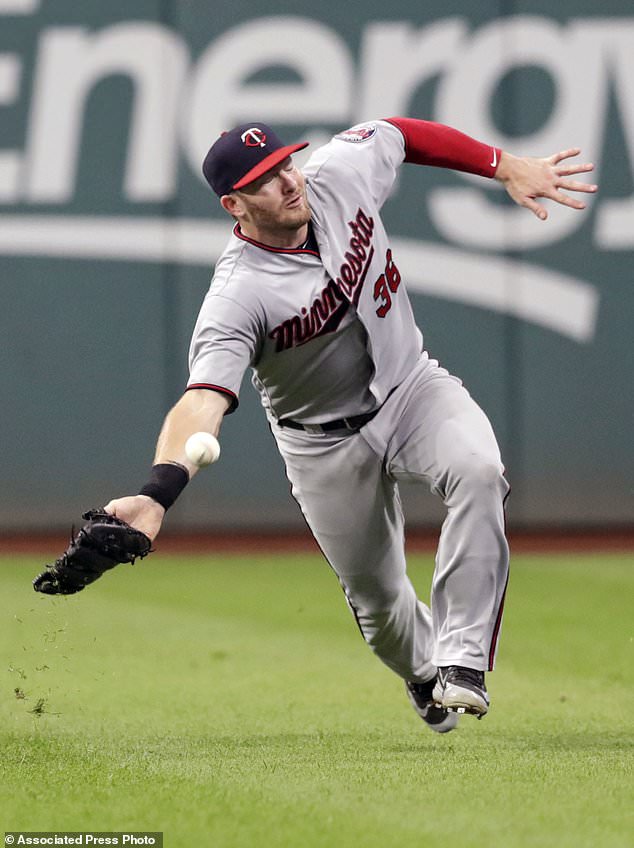 Minnesota Twins’ Robbie Grossman lets the ball get by him in the fourth inning of a baseball game against the Cleveland Indians, Wednesday, Aug. 29, 2018, in Cleveland. Jason Kipnis was safe at second base for a double. (AP Photo/Tony Dejak)