Bombing raids by Allied forces during the Second World War were so powerful they sent shockwaves through Earth’s atmosphere to the edge of space, researchers have found.

The huge bombs dropped by Allied planes on European cities were big enough to weaken the electrified upper atmosphere – the ionosphere – above the UK, 1000km away.

Researchers studying records from the time found each raid released the energy of at least 300 lightning strikes.

The ruins of Berlin seen from above, following allied bombing raids World War Two, the collapsed suspension bridge can be seen over the Rhine, Germany, March 2nd 1945. The huge bombs dropped by Allied planes on European cities were big enough to weaken the electrified upper atmosphere – the ionosphere – above the UK, 1000km away.

‘The impact of these bombs way up in the Earth’s atmosphere has never been realised until now, said Chris Scott, Professor of Space and Atmospheric Physics at the University of Reading.

‘It is astonishing to see how the ripples caused by man-made explosions can affect the edge of space.’

The discovery was made after researchers analyzed daily records from the Radio Research Station at Ditton Park near Slough, where routine measurements of the ionosphere were taken from 1933 to 1996, in what is the ‘the longest continuous set of ionospheric measurements in the world’ according to the study published in the journal Annales Geophysicae.

‘Each raid released the energy of at least 300 lightning strikes,’ said Scott.

‘The sheer power involved has allowed us to quantify how events on the Earth’s surface can also affect the ionosphere.’

Detailed records of the Allied raids reveal their four-engine planes routinely carried much larger bombs than the German Luftwaffe’s two-engine planes could.

These included the ‘Grand Slam’, which weighed up to 10 tonnes.

The ‘Grand Slam’, was designed to simulate the effects of an earthquake in order to cause wide-spread destruction to critical infrastructure, was Britain’s biggest conventional weapon ever. 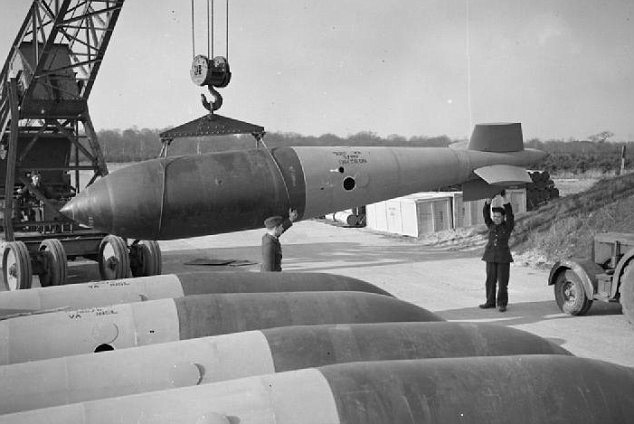 Destructive: The Grand Slam bomb was the largest conventional weapon ever deployed by the British military

The bomb was the brainchild of Barnes Wallis, who is best known for creating the bouncing bombs used in the famous Dambusters raids in the Ruhr Valley.

It was dropped on nine different sites in Germany in 1945 in a bid to damage morale and encourage the Nazis to surrender to Allied forces.

The target of the Grand Slam was key infrastructure, such as railway bridges and submarine bays, rather than built-up populated areas.

The bomb – which Wallis spent years developing before it was built – was tested just once, on March 13, 1945, when it was dropped close to a concrete bunker in the New Forest near the town of Fordingbridge.

It tunnelled deep into the ground at a speed of 700mph before detonating, setting off tremors which were the equivalent of an earthquake.

The crater left at the New Forest test site was 70ft deep and 130ft across, and eyewitness reports suggested that the test building could be seen shaking.

The researchers decided to focus on major bombing raids of German cities by Allied forces and the Royal Air Force between 1943 and 1945, rather than the ‘London Blitz’ earlier in the war.

This is because the blitz was ongoing from September 1940 to May 1941, which means the data would be harder to separate from other seasonal changes due to the sun that might affect the ionosphere.

Researchers studied the ionosphere response records around the time of 152 large Allied air raids in Europe and found the electron concentration significantly decreased due to the shockwaves caused by the bombs detonating near the Earth’s surface. An Avro Lancaster heavy bomber seen from above during a Second World War bombing raid over Hamburg, Germany. 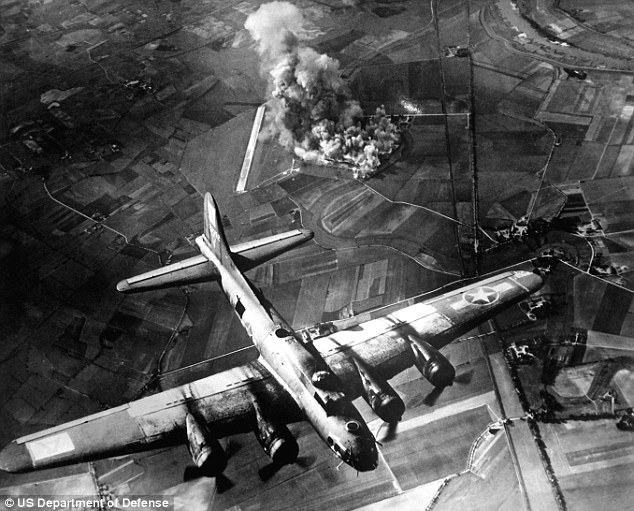 The first big raid by the 8th Air Force was on a Focke Wulf plant at Marienburg: Bombing raids by Allied forces during the Second World War not only caused devastation on the ground but also sent shockwaves through Earth’s atmosphere which were detected at the edge of space, according to new research

This is thought to have heated the upper atmosphere, enhancing the loss of ionisation.

Detailed records of the Allied raids reveal their four-engine planes routinely carried much larger bombs than the German Luftwaffe’s two-engine planes could.

WHAT IS EARTH’S IONOSPHERE?

The ionosphere is a poorly-understood layer of Earth’s upper atmosphere that acts as a border between our planet and space.

It is home to the aurora, the international space station, a variety of satellites, and radio communication waves.

Scientists know it is sensitive to weather from Earth and conditions in space, called space weather.

The atmospheric layer, which contains a high concentration of ions and electrons, stretches from 37 miles (60km) to 620 miles (1,000km) altitude.

It interacts with radio signals, and disruptions to the layer can cause problems with GPS signals back on Earth.

These included the ‘Grand Slam’, which weighed up to 10 tonnes.

Scientists are using the findings to further understanding of how natural forces from below, like lightning, volcanic eruptions and earthquakes, affect Earth’s upper atmosphere.

Professor Patrick Major, University of Reading historian and a co-author of the study, said: ‘Aircrew involved in the raids reported having their aircraft damaged by the bomb shockwaves, despite being above the recommended height. 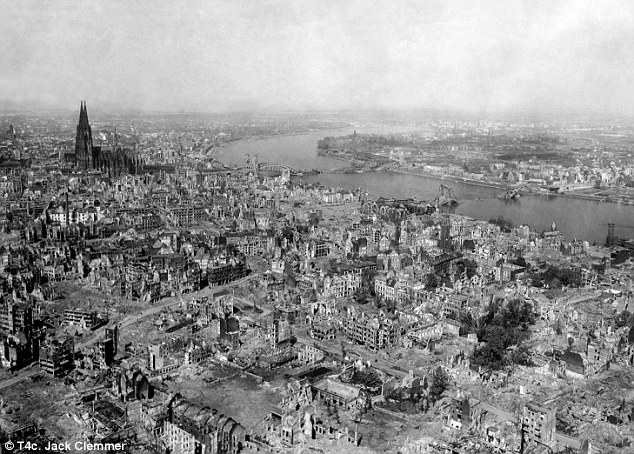 Bombing of Cologne, Germany, on 24 April 1945Bombing raids by Allied forces during the Second World War not only caused devastation on the ground but also sent shockwaves through Earth’s atmosphere which were detected at the edge of space, according to new research.

‘Residents under the bombs would routinely recall being thrown through the air by the pressure waves of air mines exploding, and window casements and doors would be blown off their hinges.

‘There were even rumours that wrapping wet towels around the face might save those in shelters from having their lungs collapsed by blast waves, which would leave victims otherwise externally untouched.’

‘The unprecedented power of these attacks has proved useful for scientists to gauge the impact such events can have hundreds of kilometres above the Earth, in addition to the devastation they caused on the ground.’