Allison Langdon questions why most of Australia is in lockdown

Allison Langdon has questioned state leaders who imposed harsh lockdowns on 12 million Australians while ‘no one is seriously sick’, before she took aim at the federal government’s sluggish vaccine rollout.

Despite Prime Minister Scott Morrison’s promises to ensure Australians are ‘at the front of the queue’ for the vaccine in 2020, only about 7.1 per cent of the population have had the jab so far.

The Today show host asked Nationals MP Matt Canavan and the editor of Stellar magazine Sarrah Le Marquand on Wednesday morning if state premiers are ‘overreacting’ by going into lockdown.

She also asked whether restrictions would be necessary if the vaccine rollout was faster.

‘Twelve-million people in lockdown across four states and territories. We only had 23 cases nationwide yesterday. And no-one is seriously sick. Are we overreacting?’ she asked.

NSW Premier Gladys Berejiklian announced a lockdown for the Greater Sydney Region when the city hit 112 cases of the highly-infectious Indian Delta variant – with the outbreak largely contained to Bondi.

Despite a low number of new cases on Tuesday, the Sunshine State entered a snap three-day lockdown after an unvaccinated hospital receptionist tested positive to highly-infectious Delta strain of Covid after holidaying across the state.

‘While I’m sure the Queensland premier would highly disagree with me here, the fact that NSW has made [the decision to go into lockdown] has made it easier for her to go into this three-day lockdown in Queensland,’ Ms Le Marquand said.

She said the situation is ‘really worrying’ for Queensland tourism operators who reap the benefits of people in Victoria and NSW heading north for the winter school holidays, but pointed out that would-be holidaymakers are unable to travel anyway due to border closures.

But Langdon fired back and asked if states would still impose draconian restrictions on Australians if more people were vaccinated.

‘To see this confusion over the last couple of days, the prime minister telling the under 40s they can now get the AstraZeneca jab,’ she said.

‘You’ve got the AMA, also Queensland Health saying “No, stick with Pfizer” and GPs are angry they were given no warning before they were swamped with calls.

‘Don’t you guys have one main job here and you are not getting it right?’

On Monday, Scott Morrison announced the people over the age of 16 could get the AstraZeneca vaccine – which has previously been discouraged for people under the age of 60 due tot he risk of getting a blood clotting disorder.

The Australian Medical Association hit back and said they were not consulted before the prime minister announced the policy changes and advised under 59 to stick with the Pfizer jab.

But Senator Canavan defended the government’s decision to open AstraZeneca to a wider demographic.

‘Ultimately the patient decides, it’s your arm, it will be your health side effects. You make that decision. Looking at all the risks. If you think you can do it go for it,’ he said. 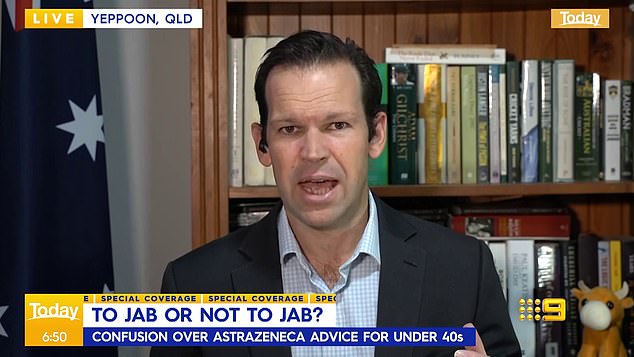 Unsatisfied with the response, Langdon then pointed out that the Australian vaccine rollout has been sluggish compared with the other 38 OECD countries, which includes the US and the UK – which have been inundated with thousands of new cases per day.

‘I tell you what, when we are the last country, we are coming last in OECD countries to roll out a vaccine program,’ she said.

‘No, we are not,’ Senator Canavan interrupted.

‘When you look at the number of people who have had a first dose New Zealand, it’s  about 14 per cent – we are about a quarter,’ he replied.

‘That’s a pretty comparable country given we both have not had widespread outbreaks of coronavirus. All those other countries that are ahead of us have had hundreds of thousands of deaths. We have not.’

He added: ‘I’d much prefer to be in a country that has a slower vaccination rate but a much lower death rate than the reverse.’

NSW has tightened the rules for people travelling into the state if they have visited other regions under new COVID-19 restrictions, as numerous new venues across Sydney were named as exposure sites.

NSW needs to get 80 per cent of its adult population vaccinated before having a conversation about what ‘Covid-normal’ may look like, the premier said.

Seventeen of Tuesday’s new cases were linked to previously confirmed cases, with the source of the other two still under investigation.

Both work in Sydney’s eastern suburbs, the epicentre of the outbreak.

However, only seven of the new cases were in isolation for their entire infectious period, causing the number of exposure sites to balloon again.