Almost 100,000 super accounts have NO savings after being drained in government early access program

Almost 100,000 superannuation accounts have been completely drained after the government allowed them to be accessed early

Nearly 100,000 superannuation accounts have been completely drained of savings after the government allowed the funds to be accessed early.

Data from super funds Mercer and Link Group, who respectively had seven and 5.4 per cent of accounts exhausted, found between 95,000 and 73,000 super accounts are empty throughout the country.

More than $11billion has been withdrawn from super accounts since the government program was introduced to help Australians in financial stress during the coronavirus outbreak.

There have been more than one million people who have accessed their super accounts, with most of those coming from young workers who were laid off due to COVID-19.

Data from super funds Mercer and Link Group found between 95,000 and 73,000 super accounts are empty throughout the country (stock image)

This has led young savers to rationalise their accounts and remove other forgotten accounts to save on fees and premiums through the Productivity Commission.

Ms Bloch said members with multiple accounts are no longer funding the overall super pool, which could lead to a rise in fees to subsidise funds operational costs.

‘It’s a difficult situation,’ she said. ‘Everything is going up except membership.’

The early access scheme was blocked last week after allegations of fraudulent withdrawals, with the Australian Federal Police making inquiries on more than 100 cases.

The coronavirus pandemic is expected to result in a $50 billion hit to the Australian economy in the June quarter.

Treasurer Josh Frydenberg says Treasury also expects the staged lifting of restrictions will cost $9.4 billion a month after July, while household consumption could drop 16 per cent and business and dwelling investment 18 per cent apiece from pre-crisis levels.

It also anticipates unemployment rising to 10 per cent.

Australian Industry Group boss Innes Willox said governments must be willing to challenge and change old ways of thinking as they look towards the economic recovery. 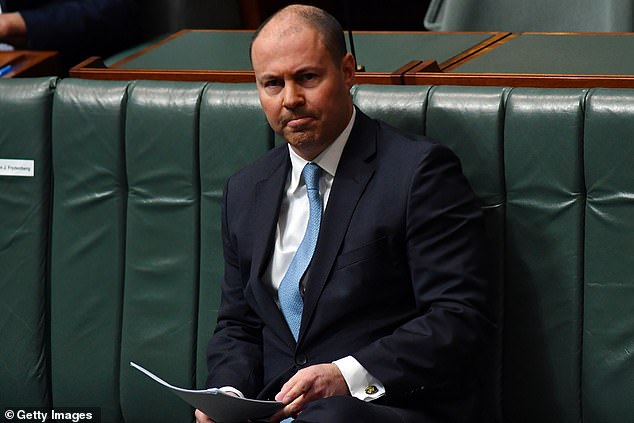 Treasurer Josh Frydenberg (pictured) said running through the stages of eased coronavirus restrictions will cost $9.4 billion a month after July

‘Conversations around policy change which were previously consigned to the too-hard basket need to be reconsidered,’ he said.

‘Changes in approach need to take account of competitiveness, productivity, growth and fairness.’

New data for wages growth in March out on Wednesday and labour force figures on Thursday are expected to add to the gloomy picture.

‘Optimism that we may have seen the back of the worst of the pandemic and an easing of lockdown restrictions have likely boosted consumer morale,’ he said.