Almost a quarter of nurseries want to ban glitter from classrooms over concerns the microplastic is damaging marine life.

Most glitters are made from non-degradable plastics  – which make them a environmental hazard, especially to the world’s oceans.

Since it was revealed late last year that these substances may pose a threat to ecology, more nurseries have come out in support of an outright ban.

A poll, by reviews website daynurseries.co,uk, found that a fifth (22 per cent) were in favour of banning glitter.

Microplastics are the result of the breakdown of the plastic waste that makes its way into landfills and oceans.

Anything smaller than 5mm (5,000 microns) is considered microplastic.

A debate over whether glitter should be banned erupted at the end of last year after one chain, Tops Day Nurseries, announced it would introduce a ban due to concerns about the damage to the environment.

The nursery’s ‘proactive approach’ won the backing of the Marine Conservation Society at the time.

The poll indicates many are in favour of banning the material outright.

Karen Elizabeth Hatton, who runs Wilderness Pre-School in Guildford, Surrey, said young pupils self-select the arts materials they use from a craft bar.

And many have decided to stay away.

‘We have it on our craft bar, but it isn’t used excessively,’ she said.

Ms Hatton said she is aware of environmental issues and when she orders the substance she will look to see if there are ‘more ecologically sound’ versions.

‘There are some things that need watching – for example, we have banned nuts as they are dangerous to children – and there are environmental issues around glitter, but we won’t be banning it,’ she said.

‘It can become a bit nanny state.’ 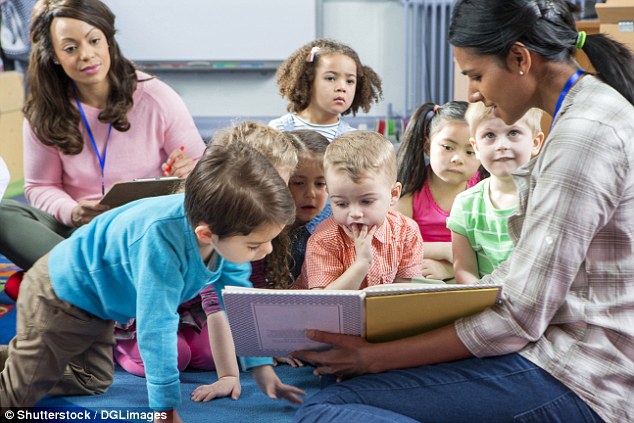 Cheryl Hadland, managing director of Tops Day Nurseries, which runs 19 sites across the South of England said she felt ‘sad rather than surprised’ by the findings, adding: ‘It shows how really important it is that we get the word out to our colleagues in the sector.

‘I would have had the same opinion only six months ago.

‘I believe that when colleagues in education, and indeed more humans, understand what damage we are doing to the environment – with microplastics and one-use plastics – that they will start to do whatever they can in order to protect our world for our children and for tomorrow.’

The survey questioned 1,092 nursery owners, managers and workers between January and March.