Hundreds of thousands of people with alopecia could benefit from an experimental drug that can cure baldness in months.

A study of the twice-a-day pill found four in 10 patients with the condition were able to regrow nearly a full head of hair within half a year.

Made by the US drugs company Concert Pharmaceuticals, the new therapy works by halting this process, allowing hair to regrow.

There are currently no cures for the alopecia areata, although other drug firms are also trialing drugs to help reverse the hair loss.

Around 100,000 people in the UK and 6.8million in the US currently have alopecia areata. It can rob people of their hair in a few weeks.

The disease — suffered by celebrities including Jada Pinkett Smith — can cause low self-esteem, depression and anxiety in those who have it.

Her husband Will Smith landed in controversy at this year’s Oscars in March after he slapped comedian Chris Rock for joking about his wife’s baldness. 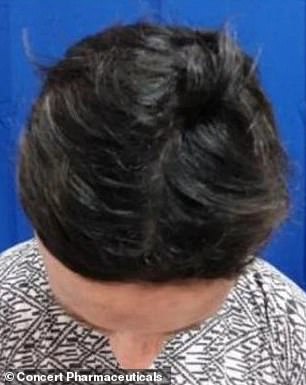 WHAT IS ALOPECIA AREATA?

Alopecia areata – a patchy version of alopecia – is an autoimmune condition in which the immune system causes hair to fall out.

It can affect hair on any part of the body and can happen to anyone at any age – it can be triggered by stress.

The hair usually begins to fall out in patches and leave bald, smooth areas.

It is not possible for doctors to predict how much hair someone will lose, nor can they tell if the hair will ever grow back.

Alopecia areata cannot be cured but if only patches of hair are lost there is an approximately 60 to 80 per cent chance of it growing back within a year.

However, there is no guarantee it will grow back and doctors cannot predict whether it will, nor how much hair will be lost.

The latest phase three trial looked at 706 adults with alopecia aged 18 to 65 in the US, Canada and Europe over 24 weeks.

Patients on average had just 16 per cent of their hair at the start of trial, and no more than half a head of hair.

A total of 41.5 per cent given the strongest dose saw more than 80 per cent of their hair regrow by the end of the study.

Among those in the 8mg group, 29.6 per cent experienced the same level of regrowth.

Side effects occurred in fewer than 5 per cent of patients, with the most common reactions including headaches, acne and infections.

The drug works by inhibiting a particular enzyme that is activated during an immune response, called JAK1 and JAK2.

These enzymes make up a group called janus kinases, and too much of them can lead to inflammatory immune responses that cause alopecia.

But suppressing them can also lead to weaker immunity across the board, resulting in more infections.

Concert Pharma expects to apply for US Food and Drug Administration (FDA) approval for the drug next year after a second Phase 3 trial, which will repeat the study on 517 participants.

Approval will depend on positive results from the second trial and could take up to 10 months.

Dr James Casella, chief developmental officer at Concert Pharmaceuticals, said: ‘With these compelling Phase 3 data, we believe that CTP-543 has the potential to be a best-in-class treatment for patients with alopecia areata, a disease that has long been ignored.

‘We are extremely grateful to the patients and teams of clinical research professionals who participate in our trials.

‘We’re working to change the treatment landscape and hope that CTP-543 will be one of the first FDA-approved treatment options for this serious disease.’

Alopecia areata does not currently have any cure and doctors cannot predict how much hair someone is likely to lose once small patches begin to fall out.

But there is a 60 to 80 per cent chance hair will regrow naturally in the small areas when it drops out.

Current treatment options include corticosteroid injections, which are powerful anti-inflammatory drugs that can suppress the immune system.

These can work in up to 62 per cent of patients but also increase the risk of cutaneous atrophy — a thinning of the skin — prompting interest in new medications.

Dr Brett King, a dermatologist at Yale University School of Medicine who led the study, said: ‘Today marks an important milestone in advancing new treatments for alopecia areata, and I’m so happy to see such positive results from the first Phase 3 trial with CTP-543.

‘There is a great need for treatments for this challenging disease, and the results from the THRIVE-AA1 trial suggest that CTP-543 may potentially provide an important therapy for treating alopecia areata.’